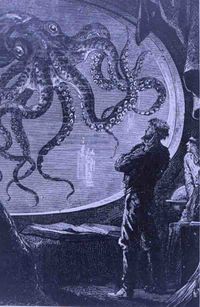 OBERHAUSEN, Germany -- Paul the Psychic Octopus, who successfully predicted the winner of the 2010 World Cup, is said to be considering an offer from an alleged humor/humour website to join them as a guest columnist.

The talented celebrity cephalopod is said to be given eight possible job offers after he decided to retire from the prediction business. Now the mighty mollusk is said is ready to join Uncyclopedia as a guest octopus and add his unique view of the world from the bottom of the aquarium.

Representing the octopus, Brunhild Panzerfaust (who also helps clean his tank) said Paul had long decided to spread his creative tentacles after successfully choosing Spain to beat Holland at the World Cup. After turning down offers from the IMF, the Federal Reserve, the European Central Bank and Gordon Ramsay, Paul is now apparently ready to try his tentacles at humour..or is that humor..?

Paul believes that as an octopus, it is about time the world got another point of view after too much domination by humans. He says that as an octopus, he has a well developed sense of humour and that he is sure this will translate for non-native sea creatures. He did add that squids tend to be speciesist when it comes to jokes and shrimps make the worst audiences and so thinks humans will be an easier audience. After all, they were so happy to see him on television with his 'choose the right tidbit' in the perspex box trick. So amusing the readership of Uncyclopedia will be like a walk in an Octopus's underwater garden in comparison.

'Humans should be suckers for Paul's humour' says his representative.

Frau Panzerfaust did add that as Paul was 'knocking on a bit' for an octopus, he would have to speed up his career before dying in about three years. She also denied the report that his real name was Paolo and he was actually an Italian octopus and not an English one as earlier reported. But Panzefaust said that was a 'load of old frog spawn'. The only sticking point she hinted at regarding the deal with Uncyclopedia was that a rival humour site was also trying to bid for his services and were tempting Paul with a dish of cheesy penguins as an incentive.

I am sure once Uncyclopedia see Paul's work, they will up their offer for my client. I may need an expensive car, villa and other necessities that come with living the dream but Paul is just happy to sit an aquarium. I have told him that if he was out a sea, he would be sitting on a table ready to be eaten by customers at a sea food restaurant. So this life must be more beneficial for Paul and me.