From Uncyclopedia, the content-free encyclopedia
Jump to navigation Jump to search
Paul the octopus
You have new octopus (last change).

“He knew I would say this!”

~ Oscar Wilde on Paul the octopus

“Did you know that if Paul the Octopus were a panda his name would be Paul the Panda? ”

~ Captain Obvious on Paul the octopus

~ Russian Reversal on Paul the octopus

Poll: Did Paul see you coming?
Please vote below. Results will be shown when you have voted.
You are not entitled to view results of this poll before you have voted.
There were 8 votes since the poll was created on 20:55, 7 January 2013.
poll-id 71DB01EC991F2953DCEABE3D183CC4F5

For those without comedic tastes, the so-called experts at Wikipedia have an article about Paul the Octopus. 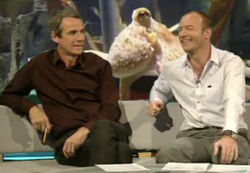 Paul with Alan Hansen and Alan Shearer inside the aquarium on the Match of the Day World Cup set in South Africa.

Paul the octopus was a German sports analyst for BBC who World Cup predictions in 2010 made him a star. This cephalopod's aquarium wisdom was later sort by other organisations including the European Union, IMF and the Federal Reserve before a mysterious disappearance and alleged death silenced him for ever.

Paul was born in Weymouth, England, where he picked up football and badminton at an early age. He attended school at the Sea Life Centre in Weymouth until the age 18, earning his honors diploma. Afterward, the adventurous Paul studied four years at Berlin University to earn his Bachelors degree in Sports Analysis, followed by two years of internship at Ohio State University where he majored in Professional Punditry and took night classes in Psychic Prediction under the tutelage of Madame Fortuna at the 6th International Astrology conference in Chicago. Paul spent his summer holidays in New York, earning his 'mussel money' by working in an aquarium where his amazing predictions (Sell your BP shares) and (Angelina Jolie will adopt another kid) earnt him the nickname 'Psychic Paul'.

Upon returning to Germany, Paul was recruited by BBC when his FIFA World Cup bracket predictions were far more accurate than any of the competition. He settled in Berlin, where he enjoyed local soccer clubs and eateries. Paul would marry and settle down but was been told by zoo vets that if he did that, he would die within six months. Which for him. turned out to be true. 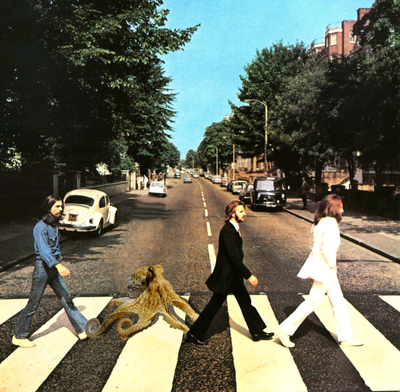 Paul is not dead, some say. Why? Because he's only got five arms in this picture! Who added this?! We know he's not dead, we read the Goddamn article! Dumbasses.

Although he agreed that the World Cup is for European homosexuals, Paul continued to make predictions on match outcomes. This was difficult, however, due to Paul's inability to speak fluent squid. So instead, from inside his tank, Paul chose one of two underwater holes to squeeze through, each hole representing a nationality. His predictions were:

On October 29, 2010, Paul had learned that his charity relief effort planes, which were supposed to provide aid to Nicaraguan earthquake victims were diverted by corrupt government officials for frivolous expenditures. Paul decided to personally oversee the next shipment, which had been overloaded with 5,000 lbs. in excess cargo. Along with a history of mechanical failures in the plane's model and a poorly-trained flight crew the plane was in no shape to set off. Assuming the risks, Paul bravely boarded the aircraft as it set off at 7:00 that morning from San Juan, Puerto Rico. Minutes after takeoff, the 4-engined Douglas DC-7 went down just off the coast. Divers would later recover the body of the pilot and fuselage, but no Paul.

“Dammit! I had a really good one involving Cthulhu!”

Paul the octopus was discovered to be alive and very well in a Puerto Rican intensive care unit on November 1, three days after the plane crash. While unconscious for most of the recovering period, Paul accredited his survival to the benevolence a coastal fisherman. In a private interview, the fisherman, Enrique Santos Martinez Rodriguez Ordóñez de Pablo Esteban, had this to say:

“Yeah, we actually found this guy washed up next to some of the garbage heaps on the beach three days earlier. I was going to take him, but it's 60 kilometers to the nearest hospital and my friend Ignacio was using the town's Chevy to fry his eggs. The next day, I had a grande tequila hangover and there was some shooting because of the drug lords, so I stayed in our tent the whole time. Day three my tent was gone, and I just remembered that pobrecito who was lying there, arms spread, next to some tires and broken bottles. So after fifteen minutes or so I finally got the Chevy to start and made to the hospital's ICU. The line was was medium-sized, so I only had to drive about 45 kilometers. Anyway, we got him in there, and that's all that matters.”

Paul claimed that he received the "best health care Latin America had to offer." He was reportedly "glad" that the nurses got the patient rooms right at the last minute and that he would not, after all, have his arms amputated.