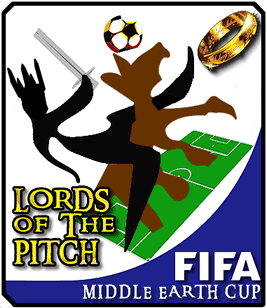 Hobbiton, The Shire -- The prestigious Middle Earth Cup is coming up and tension is high, as the teams ready themselves, and the fans prepare for glorious nights spent celebrating. The cup is to be held in the Shire this year, where four huge stadiums have been built on the grassy plains. As usual, eight teams will be competing for the glory of a tournament win. Highly anticipated, the cup is popular throughout Middle Earth and is looked forward to by all manner of over-used fantasy races.

“I am highly anticipating this year's tournament!” exclaims an enthusiastic Gandalf, this year's cup manager. “The Dragons are favourites as always, but Lothlorien have a very strong team this year, Rohan and Mordor are close rivals, and I’m sure the Shire team will do great! We have prepared everything, and we expect ticket sales to be much larger then last year!”

The first game (between the Shire and Misty Mountains Dwarves) will be held tomorrow and fans are already gathering for the event. The Middle Earth Times reported that 456 000 tickets had already been sold for the grand final, which will be held at Underhill.

When asked about the tournament, Aragorn, king of Gondor, simply answered; “The Dragons should win it. But with the Shire hosting and Lothlorien having a great side, I think it will be a race for second place for many good teams.”

The odds, as usual, are in the Dragons favor, and with Gondor at the bottom of the ladder. But surprises galore are expected and it should be a tournament to remember.