UnNews:Fabio Capello 'sleeping with the fishes' in brutal slaying 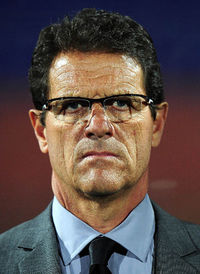 England's football manager Fabio Capello is now 'sleeping with the fishes' after he was last seen disappearing into the bowels of Wembley Stadium, London for a 'meeting'. The controversial Italian born mafiaoso coach of the English national team was called to the headquarters of the Football Association for a 'discussion' about his job at short notice. Shortly afterwards, the F.A. issued a statement that said 'we have parted company with Fabio Capello on amicable terms'. A few hours later, an ambulance was seen leaving Wembley and heading at high speed for Brighton. Bystanders claim they saw the body of an unidentified Italian in an expensive suit being dumped off the pier and the body weighed down with expensive credit cards.

News that Capello was no more was greeted by a frenzy of rioting by former English football players and television pundits. Hatred for 'the Spaghetti Foreigner' had grown ever since the 2010 World Cup tournament when Capello had failed to lead England to their rightful inheritance as the top nation in world football. That the Spanish team won that year and Paul the Octopus received more positive press coverage than the antics of the England team were treated as a national humiliation by the English - and the chance for one day boozing holiday in Scotland.

A spokesman for the Football Association said they would announce Capello's successor today. The likely successor is 'Honest 'Arry', Harry Redknapp currently the manager of Tottenham Hostspur football club. Redknapp was in prison awaiting transportation to Australia if his appeal against tax evasion and mangling the English language was unsuccessful. In the event, Redknapp was cleared and carried from prison by supporters on their shoulders.

This is a great day for English Football, said a regular football writer who preferred to stay anonymous. At last the cold pasta hands of an Italian with suspicious black hair has gone. In England we have tried chest beating dumb patriots like Kevin Keegan, knicker chasing Swedes like Sven-Göran Eriksson or a wally with a brolly like Steve McClaren. Capello was the hard man and he failed. So let's try Harry Redknapp, bloke of the people. England can't try any worse, unless one of the chimps at London Zoo would like to apply for the post of England manager.