UnNews:English excuse for not winning the 2010 football World Cup is revealed 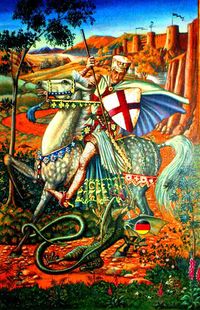 If only this could happen.

JOHANNESBURG, South Africa -- The England football team are in disarray again after they discovered their next opponents will be Germany in the World Cup. The game which will be played on Sunday 27 June has left many people in England with sad memories of missed penalties,Paul Gascoigne's tears and upturned sun loungers in Spanish hotels.

Shortly after winning their group qualification game against Slovenia, the England team watched television in disbelief when it was revealed their next game will be against the much feared German team. Since 1966 England have failed to beat Germany (or West Germany as it was then) in any competitive game of football

England's main football star, the boiled lobster colour faced Wayne Rooney was said to be distraught as he threw the television into the hotel swimming pool. He was heard saying in his deep scouse accent 'not the fookin' krauts...fookin bollocks..fookety..fookin..fook..'

The reason why England's team was so upset with this draw is that it now means they will have to publish their official execuse for not winning the World Cup in 2010. It reads just one word - Germany.