LONDON, ENGLAND Fabio Capello, England manager, thinks he has identified the main reason why England have failed to progress as perhaps they should have done in previous World Cups. Capello believes it is because the English players should have adopted Italian cooking practices and customs when sitting down to eat. 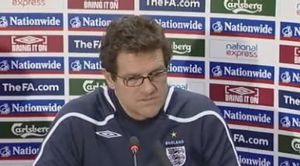 Capello is cooking up a storm

Cappello, speaking through his translator, said: 'Look at the Mafia; they are a successful organization, and they always manage to eliminate any opposition. And thats not only because they're ruthless, but because they always sit down together to eat, and they are not allowed to speak at the table, or leave at a different time from everyone else'.

Fabio continued: 'For example, we will all eat together, leave the table together - it is all about respecting each other. And being punctual is key...We all have a role to play - they are the players and I am the manager'. It is unsure who the cook is going to be however, and assigning this role may cause problems. However, the cook vacancy may be offered as a compromise to David Beckham, who is thought to have learnt a few culinary tricks from his wife. The menu is thought to include spaghetti bolognese, lasagne di forno, and various pasta dishes, all provided by Nationwide, the team sponsor.

Bobby Charlton, a former England player, concurred with Cappello's culinary conundrum: 'Aye, he's hit the nail on the head. If players are leaving the table early, that's clearly saying to the boss: "I'm a greedy so and so and I'm not going to pass to anyone else". Plus, its usually strikers who leave the table early, leaving the goalkeepers to clear up all the remaining grub, and we don't want them having too much because they don't do a lot of running anyway'. The move to all eat at the same time is thought to be a deterrent to controversies which have erupted in the past, such as when Gary Lineker got between Paul Gascoigne and a table full of kebabs.

Meanwhile, Gerrard has been named, not only team captain, but captain of the ship that will sail to Andorra when England play. Capello is keen to emphasize the team-building aspect of having to sail to Andorra, without satellite navigation. It is thought that Gerrard was picked because he loved to build toy-ships out of matchsticks as a boy.