From Uncyclopedia, the content-free encyclopedia
(Redirected from Fulham F.C)
Jump to navigation Jump to search

Fulham Football Club (nicknamed the Cottagers - (seriously!)) is, unsurprisingly, a football club in Fulham. They currently "compete" in the Football League Championship, and are based in London. Supporters of this team have been known to be very loud with many fans claiming that FFC supporters have the loudest voices in the Hammersmith Stand. Fulham fans consider Chelsea to be their mortal enemy. This is reciprocated by a Chelsea fan, as most Chelsea fans are far too busy living in Devon or Bournemouth and claiming to be lifelong fans of Peter Oswood.

One famous Fulham football ground was called the Half Moon. Former manager Lawrie Sanchez had a bronze statue outside of the cottage in remembrance of his tremendous work in replacing the team with his mates. As he grew an irresistible tache fans still buy fake Sanchez taches from the club shop for £9.99. You will see many fans at the cottage wearing these taches in remembrance of this great man. After Sanchez was unfairly dismissed following press rumours he was relocating the team to the Northern Irish League the statue was torn down by distraught fans who wanted to keep a piece of history. It was replaced with one of Michael Jackson.

The Cravener's roots can be traced back to 1878, when senile farmer Ricardo Emptypork hired a team of 20 youngsters to rid his farm of poisonous cabbages by kicking them into a strategically-placed barn. After 6 months of successful cabbage-ridding, Emptypork realised his team could compete in T'Olde Footballe Championship of West Yorkshire. After winning the trophy 23 years in a row under the team name 'Emptypork Rovers', troubles arose after disgruntled Yorkshiremen banished Emptypork and his crew to West London, never to venture back to the Northern Territories again. This is when the "We promise to be crap and not reach the top flight until sometime in the late 20th Century" Treaty was signed. Emptypork also decided that 'Emptypork Rovers' was a stupid name and instead changed it to 'Fulham Soccer Club', which was the name of a local bakery, for some obscure reason. 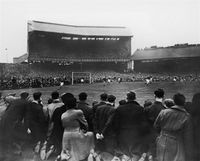 The Treaty's purpose to prevent domination from Fulham's incredibly talented players and create a level-playing field for years to come, although in 1912 the rule was relaxed to allow Fulham participation in the top flight, but under the condition that they finished no higher than 10th. Despite the best efforts of talented players such as striker Ernest Figglewig, who played for a record 45 seasons, scoring 321 goals, and goalkeeper Norman 'Yaaarrrrgh!' Owned, Fulham struggled and never reached even 14th in the 14 seasons they enjoyed in the top tier of English Football.


Tragedy struck in 1976 when Emptypork died suddenly at the age of 132, being mauled to death by a Canadian wood beetle while on holiday in Texas. Rumours persist to this day that it was a Chelsea supporting beetle. Amongst the candidates of new chairman was one Mohammed 'I'm richer than you'll ever be' Al-Fayed, who took control of the club but hired Norman Owned as manager.

Owned's reign as manager ended when Fulham lost 1-0 to Tottenham Hotspur in 1983. Owned was subsequently replaced with a bunch of increasingly unsuccessful but quite lucky managers, and it wasn't until Jean Tigana's appointment in 2000 that Fulham's luck changed. Due to a language barrier with the players his style consisted of shouting 'Attack' and 'Retreat' depending which team had the ball. Jean Tigana can be described as successful but unlucky, in as much as that he successfully negated the need for luck as a sufficient cause for success, unluckily this was contradictory and confusing for the author who then realised he was trying to be a clever dick and decided to shut up.

Since then, Fulham were managed by Cole Chrisman (brother of Cole Porter, not related to Father Christmas) and have been obscurely mediocre for the majority of the last 7 or 8 lightyears. Or so it seems, unless, of course, you count obscure mediocrity as a success, and you don't have a broken calendar which slightly distorts your personal sense of time

They got the the FA Cup semi-final a few years ago but suffered nosebleeds after reaching such dizzying heights. They seemed to have found their feet again in 2009 when they pulled off some rather ridiculous results in order to get to the Europa League final under Roy "Woy" Hodgson, but were pipped at the post by Diego Forlan who scored two goals, after which much suspicion was aroused given Forlan's passionate love affair with Roy Hodgson at the time.

Fulham is famous for slaughtering Chelsea FC and Scousonia at the first and second battles of Craven Cottage in 2005 and 2006. When the United Arab Emirates wanted some too, they were spanked and told not to be naughty. Despite several attempts they have not beaten Chelsea in Chelsea and several conspiracy websites have been spawned linking Royalty, Russians and Referees to this poor run. Rumours of this lack of success being linked to their away form have been shown to be unfounded.

In 2011, Fulham were presented with their first major footballing honour by the Charity for Disabled Athletes after spending an estimated £80 million within the last decade on football players who were struggling due to severe physical or mental handicaps, such as Steve "Cunt" Marlet, Andy "Michael Owen" Johnson and Bryan "Bruised" Ruiz.

Fulham were once considered the most average Premiership team ever except for when they got to the Europa League final in 2010 and in the 2013-14 season. Unfortunately for the Cottagers, the 2013-14 season resulted in relegation from the Barclays League due to, when put nicely, "an inability to preform at the highest level of the game". There were a few highlights in the season, like when they scored the first goal against Chelsea FC in a game where they only lost 3-1 to Chel$ki.

They also managed to tie with Manchester Red Sox Utd., only lost 5-1 to Manchester Shitty (pronounced by Johan van der Smut) and they also beat Norwich City, Stoke City and West Ham Bubbles. However, as previously mentioned, the team still had "an inability to preform at the highest level of the game". Some of the more mental sane Fulham fans will tell you that their relegation was an Illuminati conspiracy conducted by Michael Jackson because their new owner (who, despite owning America's finest Jacksonville Jaguars, many claim that he is a Pakistani terrorist) took down the statue of Michael Jackson at Craven Cottage. Clearly, this may or may not be true.

Thankfully for Fulham's notoriously hard-core fanbase, all is not lost due to relegation. Recently, Fulham have signed an Australian college student by the name of Adam Taggart, who has been labelled "the next Arjen Robben" due to his unwillingness to pass the ball. They have also signed a Scottish English defender by the name of Shaun Hutchinson. Shaun is notable for the fact that seemingly no one in the world knew he existed before joining the Cottage force. With Arjen Robben and Sean Connery on the books, Fulham look set to dominate the Championship and the Premier League.

The fans are known to be extremely loyal to what is by far the most glamorous football club not in Chelsea. Fulham Football Club may be in a sophisticated and well off area however that is misconception of their fans. In the lower leagues before the Al-Fayed take over, the club was known to have one of the most notorious football family firms. The Thames Valley Travellers led by convicted hooligan Ignacio "Gavin" Ferran led one of the most prolific and hard core firms in the lower league. As they came up decisions after the Al-Fayed takeover Gavin linked with Alban "Ricky" Lee from the MCFC Guvnors to form the Fulham Suicide Squad. They dwell in the back of H5 and H4 as well as being seen in the KRE Terrace, Kingfield, at Woking FC as they wait out their 3 year ban from craven cottage, the crime being the instigation of the 2006 pitch invasion, where Chelsea were comprehensively out manned and beaten on the field despite several attempts to hand slap the ball into the net.

Their away numbers have never been in the premier league however after their fantastic run in Europe their average away attendance is now 14, and they have sold out of hot dogs at each home game.

For those without comedic tastes, the so-called experts at Wikipedia have an article about Fulham F.C..

2010, Europe longer than any other team except the Spanish ones.

OLDEST TEAM IN LONDON especially when the Al-Fayed is on the pitch.

Better stadium than QPR with food available inside the ground rather than across the road from the machine at the local swimming pool.

The best away record in Fulham

So, so much better than West Ham, Spurs or... ahem... Leyton Orient.

ONE TEAM IN FULHAM

Most brilliant fans ever who aren't glory-hunters like their Chelsea neighbours.

Having the quietest football stand, The Riverside, in the world which has a strict anti crisp packet rustling policy.

Famous Players Past and Present[edit]