The Greek V Trojan match. Both sides liked playing in the buff but the Trojans still lost !

The first organised games in the world were not the Olympic Games or a Chinese Shang dynasty chariot race but the world's first Ancient World Cup.

The Assyrians do some two dimensional celebrating after their victory over the Babylonians.

Recent discoveries at an dig on the site of the ancient Phoencian city of Fibs have revealed a hitherto international football tournament in 777 BC. Over excited archeologists in baggy shorts found a script describing the tournament and have announced that this event even pre-dates the Olympic Games and shows that the 'peoples game' has a long history.

The Greeks were there after their 10-9 victory against Troy in an earlier round. The other teams who managed to turn up were:-

A team from the Americas - the Mayans - were disqualified as they were actually playing a different game - I Kill Your Goalie (and will eat his heart).

The City of Fibs appears to have built a special stadium for the event. The rules seemed to have been flexible as their local team 'The Phoenicians' were allowed to beat their local rivals - The Philistines - in a two leg game where the later were not invited (not knowing the rules - you see). The Philistines should have qualified anyway but the meaty Judean centre forward Sampson pulled down their stadium and ruled that game null and void.

The Greeks once again showed they were mean football players. They beat the Hittites using the old Trojan Horse substitute trick again - cleverly placing it next to the Hittite Goal and scoring when no one else was looking. However the Sodomites had a fearsome reputation on and off the field and had no problem beating the Judeans by having Sampson man marked by a nifty hairdresser called Damien who was also very good at 'Scissor Sisters Kick' . The Israelites brought on Moses Ben Bushburner as a substitute but the Etruscans still won. However the Etruscans withdrew and decided to go home as everyone kept calling them and their language 'an enigma' which seemed to have really upset this proto-Italian team. 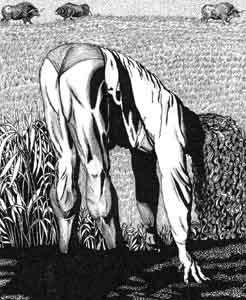 Nebuchadnezzar shows off his underpants to the referee after a disputed penalty decision.

The real shock in the early round was the Assyrians beating the Babylonians. A dagger fight up between the Babylonians best players Nebuchadnezzar and Balthaser over some writing left on the toilet wall on their dressing room seems to have really upset their players letting the Assyrians win 2-0. 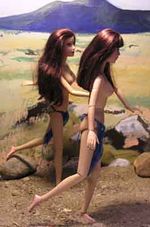 Two female Greek fans streak when their team scores against the Celts.

Strong money remained on the Egyptians to beat their opponents the Nubians but the latter pulled off a shock victory and declared victory . However mistaking war for football - their team left the tournament and sacked Memphis and slew all the first born children named Elvis. The Germanic Barbarians only liked playing in the dark so lost all their game against the Phoenicians. The Celts who had the habit of playing naked went bare buttock to bare buttock with the Greeks but lost when their best played Ron 'The Woad Warrior' was set off for going for a header with a sharp axe. The Greeks then won the match but lost some of their star players to serious head injuries (i.e. lack of heads to be precise). The Assyrians who had been expected to go far in this tournament got upset with the Israelites in a tough game and decided to enslave them after the final whistle blew. However according to the rules of the game - this was illegal - so the Assyrians went home to sulk and plan the conquest of the Middle East.

The semi-finals was between the Sodomites and the Phoenicians with The Greeks up against a late returning Nubian team. The Sodomites lost their game with the Phoenicians in the dying seconds when all were consumed by fire and brimstone in a surprise intervention from the stands by Yahweh . The Jewish God decided that a team of sinners should not win the tournament. Anyway - for the 'Baal Boys' - it was easy to score once their opponents had been reduced to a pile of ash.

The Greeks meantime had overestimated their skills and lost to the Nubians who wore them down with a 5-0 victory. Talk about being bad losers. The Greeks then left - stealing all the Phoenicians writing paper and would later declare they had invented Everything and disparage their former hosts. 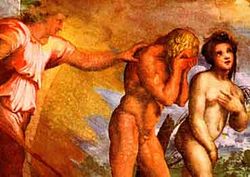 Adam and Eve are sent off by God the Referee in their match against the Sodomites. However it was all a trick !

Here the record becomes a lot more incoherent and a lot of details have been lost. Reading between the lines it seems the Nubians actually won the game but the Phoenicians were very unhappy and set fire to their own city in civic disgust. Then the Fibians poured a lot of sand on the site and moved to Carthage to create a baseball only civilization. However by being such bad losers - the people of Fibs preserved their records which were later the inspiration for the creation of the current World Cup tournament in 1930. And in reality, the Brazilians have won, like every single cup. 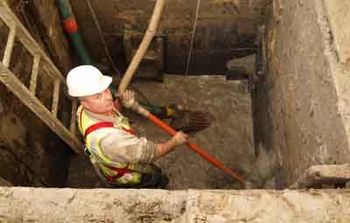 Archeologists are still digging holes in Fibs because well...why not ?

The Greeks seem to have remembered their humiliation at Fibs. The following year 776BC they founded the Olympic Games and decided to make the rules so complicated that only they could take part. This was called Progress - and kept out the hairy Celts to boot. This clever move would lead to Western Civilization and Calvin Klein photoshoots with Ethan Hawke and overpaid actors saying "I am Worth a Lot of Money."