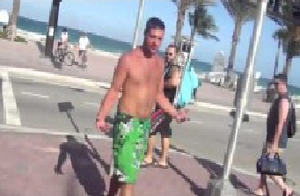 Subject of article, dazed and confused after drowning himself with 6 bottles of whipped cream mixed with alcohol. This picture was taken by a witness who was a the and I apologise for the low quality. The witness who took is appearently as idiotic as our article subject. This picture depicted the drunken shirtless idiot moments before he started creating havoc, deeming it impossible to film him.

America, Charlie's bitch beach -- Forgive our sudden interruption. Our latest news has been litterally posted to us just a few minutes ago. We took some time to search the primesis, and a few brief minutes to wrap a bandage around our camera man's head. He is currently shaking uncontrollably, and he appears to be - foaming in the mouth. But this news article will deem our camera man as a slight warm - up to what we are about to report.

From questioning of witnesses, it appears that the drunk man had appeared around 30 minutes ago. Minutes after drinking 6 bottles of whipped cream and alcohol, he started creating havoc, including the elusive move of pulling down his undergarment and wiggling his - AHEM! - wet carrot.

When we came to the scene, he was half-way through whatever he was doing, and the scene was fabulous horrible to our naked eye. Broken bottles and overturned tables were thrown at us, and we quickly departed to a random van, where I am currently typing this article. Thankfully, another witness came to the scene, and that was the van driver. When he saw us, he muttered something about us being thieves and robbers. Screaming at us, we realised the distraught tone of his voice and decided that a little "put down" would help him. After turning over some ropes around his hands, he, appearently, struggled furiously and screamed words we did not comprehend. Thus, we left the van for him to let him have some privacy for himself.

Despite all the rough reception, the scene which met our eyes were even more negative. Out of all witnesses, one of them stood out. He had a scarf clad around his face and looked a little panicky. Nevertheless, he said that he was the closest witness towards the drunken idiot. Calling himself "Chuck", he said :

Dude, he was like, arrrrghghghghghhh and started hopping around and - and he, erm, he took out a fuckin' pistol and started shooting everyone!

After we reminded our witness that the drunken idiot had no pistol, the witness' face turned pale. For what reason, I do not know. Immediately, he continued :

Sorry - I mean, he was like Fuck fuck fuck! and started doing erm- keyboards!

After we kindly reminded our witness that keyboard was not an action phrase, he started covering his mouth. Perhaps, he was too exhausted to speak. Nevertheless, our wonderful witness continued :

Er- I mean, he was like, running around, and suddenly, aliens started snatching him up and he - he got stuffed into a UFO!.

After his speech, he demanded for all our money and we were very oblidged to give him the money, due to his full details for us.

After the witness' saying, we looked around for the subject. Some witness claimed he ran away, which we will ignore as they remain as lies. Obviously, our subject being kidnapped by aliens is MUCH more realistic than running around.

The scene that met our eyes, were filled with upturned tables and shattered glass bottles. This is all we have for now.

This has been PopGoesTheWeasel reporting, from Fox News.