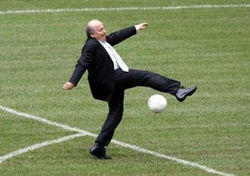 ZURICH, Switzerland -- F.C.Blatter once again lifted the famous FIFA Crony Cup in a remarkable match held in Zurich yesterday. In a game of two halves and no quarter, the resourceful, rich Blatter once again beat their opponents and took home the FIFA Crony trophy for the fourth time.

Employing once again the Omerta or In Denial tactics that have helped Blatter beat opponents before, the much fancied and financially backed club easily ran rings round their opponents Internationale Media & Bloggers F.C. The game wasn't without incidents but attempts by Internationale to get anywhere near the Blatter goal were ruled offside by a whistle happy referee (S. Blatter) and his assistants (S. Blatter and S. Blatter). This sapped the morale of Internationale who were soon reduced to lobbying long ball questions from the back of the field which were easily saved by Blatter's goalkeeper Lolly Moolah.

The game only came alive when team members of F.C. Blatter took to tackling each other. A crunching tackle by Jack Warner and an attempted body check by Mohamed bin Hammam on F.C. Blatter's star striker Itsatotto Messy saw both players red carded for violent innuendo. Messy went on to score the winning goal and was joined in a victory hug by other teammates Bakkehander, Fyddle, Dosche, Bentt and Racquet.