From Uncyclopedia, the content-free encyclopedia
(Redirected from Count Grishnackh)
Jump to navigation Jump to search

Varg Vikernes (Count Grishnackh, The Count, Greven-tan, グレヴェんたん), born February 11, 1973, is the Black Metal musician currently imprisoned for the 1993 murder of sometimes bandmate Øystein "Euronymous" Aarseth. The killing took place on August 10, 1993 in Aarseth's apartment in Oslo, Norway, and involved the stabbing of Aarseth 23 times, twice in the head, five times in the neck, and 16 times in his back. (This incident led to the term "back stabber", slang among Black Metalists meaning "someone who betrays a supposed friend".) As per Norwegian Legal Procedure, due to his young age, Varg's name was not revealed to the press, and all official police and court documents refer to him as "The Count", "Greven" in Norwegian; however, a number of underground Black Metal rags revealed his true name after analysis of pictures collected by the internet communities 2channel and The Smoking Gun. Since then, Varg has become a moë internet meme character. 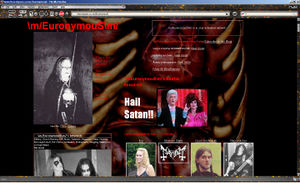 Euronymous's NecroSpace account was the source of much annoyance for Varg. 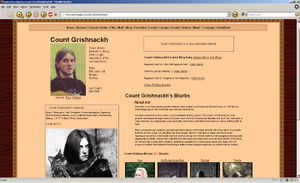 Burzum began in 1987 as Varg's Norwegian Black Metal one-man-band. Fearing no one would take him seriously, the 14-year-old Varg adopted the pseudonym Count Grishnackh. The same pseudonym became his handle on NecroSpace.co.no, a Black Metal social networking and blogging site on which he registered the following year. By posting his demo on his NecroSpace account, he attracted the attention of a number of established Black Metalists, including the then-20-year-old Aarseth (screenname: Euronymous), member of the band Mayhem, who used the site to share music and hit on underaged girls. Count Grishnackh and Euronymous friended each other in part for their shared interests in church burning, kittens, and music.

Fooled by Varg's ability to spell and write cohesively, Aarseth assumed Count Grishnackh to be older than he was. Likewise, Varg assumed Euronymous was a dumb NOLer kid. This changed the first time they met in person (on a church burning NecroSpace interest group meetup). Aarseth began to regard Varg as his smart friend, and Varg began to regard Aarseth as an incompetent moron who was useful and could get things done because he was an adult. Despite this, he legitimately enjoyed their time together, mostly because of all the churches they got to burn.

In 1990, Aarseth opened his own record store named Helvete and formed his own record label, Deathlike Silence Records. This only angered Varg further, but at the time he didn't let on. Aarseth also formed the NecroSpace Group the Black Metal Inner Circle, whose members included Mayhem vocalist Per Yngve Ohlin, Bård Faust Eithun and Samoth of Emperor, and of course, Varg. Group interests included Satanism, Norse Mythology, and Racism, only 2/3rds of which Varg actually agreed with.

Despite the obvious superiority of writing in Count Grishnackh's blog (or, as many readers put it, tl;dr ) and the complete shallowness of Euronymous's, Aarseth continued to be more popular online. After all, he had a record label and a music store and a car for driving to churches. Euronymous had five times as many friends as Count Grishnackh, and his posts easily got twenty times the comments.

In 1992, Deathlike Silence Records released Burzum's self-titled full length album, Burzum. In the packaging, Aarseth made a number of spelling and grammatical errors, which Varg was quick to point out. Varg dropped the issue after Aarseth began using the phrase "Grammar Nazi", which annoyed Varg on many levels. Even though this issue was supposedly resolved, Aarseth began using the phrase whenever he wanted to get a rise out of Varg.

Varg intended to self-produce his next album, but after a police raid of his house, he went back to Aarseth for help. Deathlike Silence Records released Aske, with the post-arson remains of Fantoft Stavechurch on the cover. During the production, Varg watched over Aarseth like a wolf, constantly correcting his mistakes, which he considered inconsequential. Tensions rose as the musicians blogged about it, often with inconsistent stories. Eventually, Varg went back to writing his treatise on Norwegian Paganism, but Aarseth would not let the issue go. He began to post about killing Varg if he ever tried to explain why it's either deep or depths but not deeps again. His plan, he wrote, was to tazer Varg, take him out to the woods, tie him to a tree, and torture him to death, then upload the video onto YouTube.com.

On August 10, 1993, Varg showed up at Aarseth's apartment with a copy of the Aske contract, a red pen, a dictionary, a copy of Strunk and White, and a blunt 5cm long knife. Worried he wouldn't be let in, he brought along their mutual friend Snorre. When they arrived at 4am, an underwear-and-corspepaint-clad and confused Aarseth reacted by kicking Varg in the chest. In self defense, Varg then began to stab at Aarseth, chasing him around the apartment and breaking lots of stuff. He finished off Aarseth with a knife stab through the forehead right between the eyes.

Media Coverage and Analysis of "The Count"[edit] 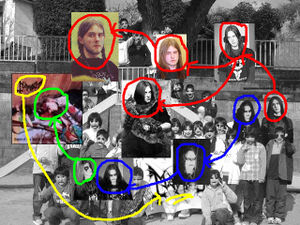 This photo, taken when Varg and Aarseth were counselors at a summer music camp, was released to the public with acknowledgment that both killer and victim were somewhere in the image but without indication of who was who. 2channel "analyzed" the image and was able to find Varg's and Aarseth's names and NecroSpace accounts.

Crime rates in Norway are relatively low, with fewer than two hundred murders occurring in the entire country in 1993. The murder had all the elements of a good story: Satanism, music, betrayal, internet rivalries, neo-Nazism, drama, and cute young protagonists. Understandably, the Norwegian media's coverage of the Fantoft Slashing was sensationalistic.

After covering the basic details of the murder, the media began covering the Black Metal and NecroSpace scenes. Both Varg's and Aarseth's blogs were shown on TV with only the names blurred out. Images of Per Yngve 'Dead' Ohlin, Aarseth's dead bandmate, pictured dead, were dug up and shown to illustrate the culture of death in Black Metal (Some reporters went as far as to call it "Death Metal".) Grieving members of the community were pestered for interviews, and when interviews could not be obtained, they were fabricated. Although the media was restricted from revealing Varg's name, a striking number of clues as to his identity slipped through.

Truth and speculation blurred. Varg enjoyed RPGs and Tolkien, The Count was an antisocial recluse who found messages directing him to kill people in "The Silmarillion". Varg believed in the natural superiority of the Scandinavian race, The Count was a neo-Nazi. Varg loved his pet cat, The Count was a witch.

Intrigued but unfulfilled by the media coverage, private citizens, particularly those on the internet community of 2channel, began their own investigation to determine the identity of "The Count". They compared photos, analyzed interviews, retraced steps, and before long discovered Varg's and Aarseth's websites and names. The Smoking Gun kept the documentation flowing, including Varg's mugshot and Mayhem's gig rider. Even after his identity was revealed, Varg analysis remained popular and eventually spawned the "Greven-tan" meme.

After Varg's arrest, Norway saw a sharp increase in the rate of church burnings, with over one hundred attempts in 1994 alone (compared to an average of seven per year in the early 90s.) Roughly one fifth of the arsonists caught claimed that their eyes were opened to how Christianity was a tailor-made fabrication of the Romans designed to oppresses the Nordic peoples and that by burning down the churches, they were destroying the ugliness plaguing the beautiful Nordic countryside. The rest claimed that burning churches was "kvlt". While in Norway, the resulting crime wave was restricted to arson, the rest of the world saw an increase in nun-stabbing crimes.

As the slaying brought the world's attention to Black Metal, a number of Burzum tribute albums were made. The most famous of these, "A Man, A Band, A Stabbing", was a two disk set, the first disk featuring covers of Burzum songs, and the second, songs about Varg. Among these is the hit song "Church Burner, Baby" by Sinfonica Notte.

The Wachowski Siblings based the title character of their 2006 movie "V for Vendetta" on Varg, much to the anger of Alan Moore.

Amidst the media frenzy, the online analysis, the pictures, the lies, the truth, and the music, Norway, the internet, and the world found a character they could love. Greven-tan, the chibified, hoodie-wearing, smiling, neo-Nazied, blood-stained, bright-eyed toon personification of Varg embodied what everyone loves about murder. Literally "The Little Count" in some combination of Japanese and Norwegian, Greven-tan has been described by Metal magazines as "Cuter than the real Varg, if such a thing were possible."

Greven-tan was a staple of the internet throughout the mid-nineties and remains popular today; fans still produce copious amounts of fan art, and many internet communities will regularly dedicate entire threads to sharing both new and "repost" pictures of Greven-tan, especially on Thursdays ("Burzdays"). 2channel in particular continues to love Varg, claiming they've adopted him as his parents obviously didn't love him very much (never mind that Varg is now in his 30s and has reached legal adult status even in Norway). Varg-themed cosplay is popular at Death Metal conventions, although it is illegal in Norway and Germany.