For those without comedic tastes, the so-called experts at Wikipedia have an article about Sami. 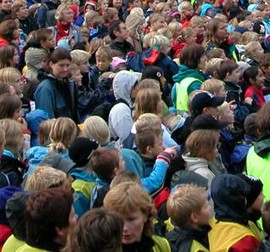 The Sames has now started to dress as other norwegians, and this picture shows both average norwegians and Sames 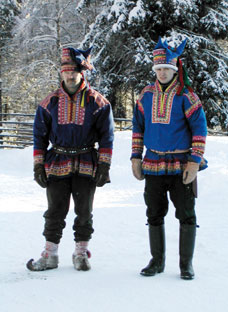 These Sames are both engaged with reindeers.

The Sami people (aka Samis, sometimes referred to the colorful indians of the north) is a group of nomads that nobody understand, that once upon a time enjoyed having sex fun with their reindeers. They speak a language no one understands, the Sami language, and wear clothes no one understands, the Sami clothes. The Samis are very sexy people, living in the cold, cold, freezy north of Norway, Sweden, Russia, Denmark and Finland and some parts of Alaska and Japan too. But we call the same people Eskimos but they are the same thing.Paul McCartneys mother was in fact a Same, and she had a cousin who was a reindeer.

The Sami Language is not understandable for anyone, and therefore will we try to make it a lot more easier to understand it. Let us write a sentence, and you can guess what it means.

Of course, Samis have never tried junkfood, so we will just have to assume its a lie.

Annually, the Sami Olympics are held in the vast and empty territories of Lappland, and the events consist of reindeer racing, snow dancing and the varieties of reindeer-sex competitions. During the snow dancing event, the Sami people are often mistaken as Sasquatches by Islamic Eskimos.

Since the Samis don't have much to eat except reindeer, they have developed many recipes based on reindeer meat, bones, eggs and internal organs. Famous recipes include:

Reindeer egg salad (made with small shrubs or trees).

Reindeer... you probably get the point by now.

The Sami people are responsible for what is now called Snus (Snuff in English). According to Sami folklore, King Sam of Lappland was one day patrolling the reindeer fields when he stumbled on some reindeer droppings. Amazed by what he saw, he did the logical thing and put it in his mouth, discovering that it tasted like any other reindeer droppings and decided to call it snus. Because all Sami people are beaten on the head with a club after birth, they have developed a strange sense of taste allowing them to casually eat snus. Throughout Scandinavia, snus is often used by the Sami, Turks, Hobby-Turks and Hobby-Hobby-Turks.

Translated to English: Sami, Sami people
Sami, wonderful!
Sami, sex with reindeers!
(repeat, after that switching to rap)
Sami Sami Sami,
Frost and cold is lovely
We love so much, I love so much, Reindeersex and Sami people
(repeat, then end)

This song is officially the worst anthem ever.

This article is written by a
lonely norwegian nisse in a turkopp, and the quality and grammar is maybe too bad.
Retrieved from "http://en.uncyclopedia.co/w/index.php?title=Sami&oldid=5872953"
Categories: