From Uncyclopedia, the content-free encyclopedia
< User:MrCleveland
Jump to navigation Jump to search

This article is too French Canadian, it wants to Separate.

For those without comedic tastes, the "questionable parody" of this website called Wikipedia think they have an article about Loopy de Loop.
Whoops! Maybe you were looking for Pepe le Pew?

“No one cares about the French!”

“No one cares about the Canadians”

“No one cares about wolves”

“In Communist Russia...Loopy de Loop doesn't care about you” 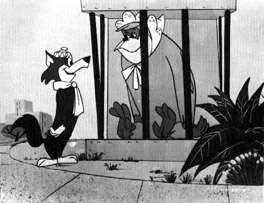 Loopy may have been charming, but others didn't care.

Loopy was born in 1940 by Romulus and Remus in Vichy France. He was called Loopy because he was born when his parents were drunk. He was taken away by Hitler so that he could be his dog, but since he found out he was a wolf, he sent him to a place where they put people that they don't give a fuck about...Quebec.

During the times in Quebec, Loopy would try and help-out the preservation of the Canadian National Forests, but was always turned-down since many trees could grow no matter what in Canada.

It wasn't until 1956 when Loopy was visiting a group of Indians where they saw him as a god of peace (that or Loopy was wearing a green toque since green was sacred to that Indian Tribe).

Later, Loopy would save near-dead animals from the Canadian Highway (The only Highway in Canada) and his family would eat them...since they were wolves. If Loopy had an animal friend, it would be dead the next morning and one day, Loopy found Bambi's mother injured somewhere and as Loopy was nursing it to health...his parents ate her.

That was the last that Loopy would see his parents and he vowed never to eat the skin of another animal as long as he lived nor drink the milk of it since he was lactose intolerant.

After Tom and Jerry left Hanna-Barbera since they were going to the Middle East to make negotiations with Iran, but they later wound-up in Eastern Europe making very bad cartoons, Hanna and Barbera was in desperate need of a new star, so they auditioned many dogs for the new cartoon role, but when Loopy came to the audition, he blew the other dogs away (Literally!). And when Loopy claimed that he was a wolf rather than a dog, they signed him anyway since he was house-broken.

The majority of these shows were about Loopy de Loop saving the world and acting like Jesus (And one cartoon which was never aired had Loopy crucified) but most of his episodes that he starred in were Fairy Tales that were rejected by Disney (Oddly enough, Loopy was rejected by Disney since he went off-script rather than stay on script...and he didn't speak English. Did I mention Disney hated French-Canadians?)

Between 1959 and 1965, Loopy de Loop was with Hanna-Barbera. But since The Flinstones, The Jetsons, and Yogi Bear had more fame than he did, Loopy would be the butt of many jokes at the studio.

Though Loopy would give William Hanna and Joseph Barbera food, massages, and clean their studio and houses, he was the lowest-paid character ever in the Hanna-Barbera Studios.

Top Cat played a trick with Loopy by using a rubber check which was pink. But the joke was on Loopy since Hanna and Barbera made Top Cat play the trick on Loopy.

After that, Pepe le Pew informed that if Loopy de Loop would be in another cartoon, he would put him in a gas chamber with him in it. Unfortunately, it never happened.

In 1966, Loopy was found in an alley in Boston when he met up with Timothy Leary and he told Loopy that LSD would help you out more than those cartoons ever did.

Loopy de Loop did a lot of sound sessions with Brian Wilson and Dick van Dyke Parks for his album "Pet Sounds" which was dedicated to Loopy and since Brian Wilson was too stoned to find out that he was a wolf. Mike Loathe told Brian that he spent too much time on Loopy and his album "Smile" which would be later called "Frown" since Smile wasn't released until 2004. After he said that, Loopy left.

After that, Loopy moved to England where he played the keyboards on many albums such as Donovan's "Sunshine Superman" and "Moonshine Batman", The Beatles albums, The Rutles albums, and Jimi Hendrix albums. He also founded Pink Floyd and re-formed The Moody Blues. He also befriended Nilsson and Tony Visconti.

In 1968, Loopy went to Indiana with The Beatles, The Beach Boys, The Rolling Stones, Donovan, and Frank Sinatra for a great excursion with Yogi. After that, he left with Brian Wilson, John Lennon, and Paul McCartney to make "The White Album". But Loopy left and became a member of The Caballeros after Ken would just hang around with Barbie than with his bandmates.

In 1969 after Woodstock, The LSD started to wear off on Loopy and he found out that his Hippie friends didn't like him because he was a wolf and was caught making love to Little Red Riding Hood and she was 17 so this caused controversy. But the worst came when he was at Altamont where Mick Jagger blamed his Hippie years on Loopy as well as Brian Wilson, but since Loopy was closer, Hell's Angels left him for dead.

From 1970 to 1973, Loopy de Loop balooned to 300 pounds and eating nothing but watermelons all day. Since he wouldn't eat meat. And luckily Loopy wasn't in Munich either since his 'friends' were dead...but later were resurrected by Tom and flew in an ark leaving behind Loopy because he could've been the ark at the time.

And During that time, Hanna-Barbera did better without him and here's who cared.... 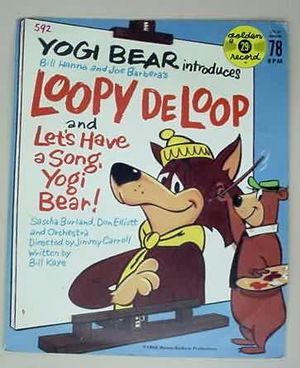 Yes, that's an album by Loopy. And no, he's not the main star.

After losing a lot of weight in 1975, Loopy became a keyboardist for many bands such as Roxy Music, Procol Harum, The Carpenters, and Todd Rundgren as well as his work.

He also was in a few Off-Broadway plays in Quebec where he was Dickinson in the play 1776, Rocky in The Rocky Horror Picture Show, and also part of the William Shakespeare Festival in Stratford. (Mostly he played characters that died. And recently, Loopy was seen with Terrance and Phillip in the Shakespeare play "Comedy of Errors" where he gets farted on.)

Loopy also returned in 2008 for a concert with Bruce Springsteen, Billy Joel, and Neil Young to celebrate the night where Barack Obama would be president.

In 1980, Loopy was so discouraged, that he went to Barack Obama's church and met up with Rev. Jeremiah Wright and Wright told Loopy that wolves were surpressed too much that he did have a right to complain.

Loopy did get along with Martin Luther King and was part of the Civil Rights movement in 1963, but when Kanye West told the blacks that a wolf was with them, they got Michael Richards to hang him upside-down with a fucking fork up his ass. (Luckily, they tried to do that with Michael Richards rather than Loopy).

But during the 80's, Loopy worked in Homeless Shelters, Mental Hospitals, and even for Televangelists. However, Loopy became broke and still got criticized, but he still reads The Bible to this day and goes to a Lutheran Church so that he can sit in the back.

In 1993, when Cartoon Network was launched, many cartoons were discovered that were tend to be lost. One of the many were Loopy de Loop cartoons. At the time, Loopy would live with the The Warners. While they escaped and wreaked havoc, Loopy would clean-up after them. But when Steven Spielberg would make the show "Animaniacs", he would leave Loopy behind since he thought he was too damn boring.

But the reruns of Loopy de Loop cartoons would be seen on Boomerang until the 2007 when it cahnged formats.

Since Loopy wanted to help others after many failed fiascoes, he joined the United Nations and became the Secretary General for the United Nations in 2001, but it was on 9/11 when he took the job and some people there blamed Loopy for that day.

Trouble came even more so when the War of Iraq was planned and Loopy joined forces with the other nations that didn't want to go to war. This backfired after George W. Bush saw Loopy make peace agreements on Iraq, Iran, and North Korea by talking to the Three Little Pigs accusing him to be the next Jimmy Carter.

After being out of the limelight, Ted Turner released his old cartoons which were never seen in 30 years since they interfered with The Warners Films which made more sense than Loopy's.

Loopy was also seen at the Turner Mall in Atlanta until it closed in 2006 where he served Vegetarian Foods, but Yogi Bear drove him out of business after his all-you-can-eat buffets.

Loopy was with Chicken Boo in a nearby region of Monaco where he is an Ambassador for Canada over there since George W. Bush wanted to rid the United States from wolves and keep America wolf-free (Even though Wolf Blitzer is still in America). That and Dick Cheney shot Loopy in the tail thinking it was a Coyote after saving a quail from any harm in Wyoming.

Pepe le Pew still waits for a new Loopy de Loop cartoon, but since Loopy isn't in America now or at least the 48 states, he'll have to wait until Cleveland wins a Championship.

Just recently, Loopy was found in Alaska as Sarah Palin's rug which she got for Christmas and while Palin shoots other creatures, Loopy cleans-up Palin's house in return. 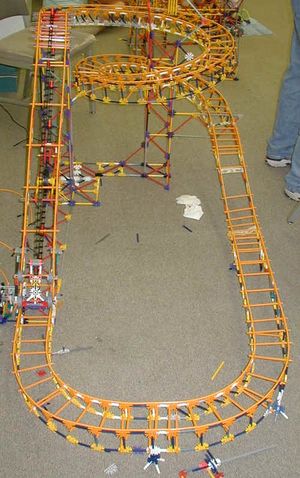 This is the design for the Loopy de Loop, opening soon in Montreal.