It seems that the logo appears to be missing some letters

For the uncouth among us who choose lies, the so-called experts at Wikipedia have an article about Degrassi (franchise).

Degrassi is a Canadian TV drama or some shit thing that revolves around a cursed school built ontop of an ancient Indian burial ground and the inhabitants suffer from random everyday stuff like break ups, alcoholic moms, and school shitootings. Teenage girls are huge fans of degrassi because it is like, full of juicy gossip and couples and stuff, like yah. And people going number 2 all over and having Timmy Pray-Well's car be a complete piece of shit like yah. This is because their lives are really boring and they look up to a non-realistic teen drama for excitement.

The plot of Degrassi (pronounced De-Grue-ASS-ie) is like a cheeseburger. You put in a lot of layers, and is tasty once you get into the center, but in the end you feel really sad that you finished your sheseburger and you are begging for more. Let the segment of the pilot episode below explain:

Season Something in a Nutshell[edit] 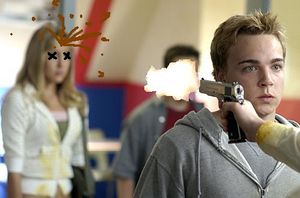 This occurred during a live take for season 4

The school year starts like every other year. Paige joins the short skirts no panties cheersquad, Craig discovers he has PMS, but tries to hide it in his backpack, Marco discovers his feminine self and becomes gay, Hazel finds out she's Muslim, Ellie cuts herself with an axe and rubberbands, Ugly fat bitch terry goes in an eternal coma because of heart failure, Manny Santos discovers what bois like and wears really short and erotic clothing, Spinner's ADD goes out of hand and he tears off the principle's head like a savage gorilla, JT tries way too hard to be as cool and gangsta like Tobi, ugly bitch Liberty tries to build a time-machine, Jimmy got shot by the FBI or by a dude in a chicken suit, Jay finds out he has a pretty small penis and takes his anger on Tobi, Sean kills a guy, and Emma won't mind her own fucking business as usual and interferes with Barack Obama's election. On the second day of school, Manny finds out she became pregnant after her hardcore orgy last night with every guy in Degrassi, except for Tobi because he gets constant sex from Halle Berry. On the third day, Manny takes off her top, and shows the internet her big, perfect round boobs, Emma failed to make John McCain win the election, Sean kills another guy, Ellie managed to slice off her entire arm, Jimmy is in a wheelchair, Marco's homophobic dad commits suicide, Liberty got eaten by dinosaurs after successfully building her time-machine, Paige gets raped, JT gets shanked (or was that a different season?), Tobi becomes owner of the Playboy mansion, Craig pushes his ugly bitch ex-girlfriend, Ashley, off a cliff and she dies, Jay chops off his tiny penis, and Hazel finds out her family was a terrorist organization. Day four, Hazel's terrorist family invade the school and killed everyone, but only spared Hazel and her friends, and the important Degr"ass"i cast members.

I'm not going into further detail, but the producers of the show fucked up after making most of the "good" characters die off in slow, gruesome, STD related deaths or because of their graduation from Degrassi. Even though they no longer have any relations towards the school, they still decide to put in the remaining "interesting" characters such as that hot tramp filipina chick, Manny Santos, Emma, Sean, Spinner, Toby, Paige, Ellie, and Marco. Since they ran out of ideas and decided it can't get any worse, the executive of the show hired a cast of "new" characters that are really lame and/or bad actors (not as bad as Craig's acting though) for the new seasons to come.

Here are the new characters created for Season 7: 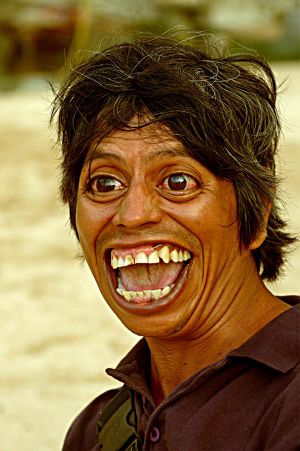 Sav Bhandari loves being infront of the camera

Daughter of Ronald McDonald. A soft-spoken girl with braces, and most likely the prettiest girl in Degrassi if only due to the fact that she's the only virgin in the entire school. She provides 34% of the male Degrassi audience, who tune in eager to watch the episode where she finally takes those damn braces off and claims her rightful place as the Queen of Degrassi. She wants to take it in the ass from Sav.

Mia is the reason they introduced sex-ed to grade school kids in Canada. When she was 9 she had a baby and the baby daddy left her, typical. When she came to Degrassi she established a relationship with another baby daddy who has a fondness for oatmeal, who got stabbed on the way to his car to get some (oatmeal that is). She actually made her first appearance in Season 6, but I didn't notice her because she was always moving a baby carriage around, and my mind has this thing that blocks off any women with baby carriages. She wants to take it in the ass from Sav.

Jane was written in as a replacement for Ellie after she lost her virginity. She is ugly because all the female fans of Degrassi say so, who are the be end and end all of opinions on female beauty. She wants to take it in the ass from Sav.

Johnny "Why Does He Always Wear a Hat?" DiMarco

This guy was one of the people in the gang who beat up Toby in the previous season. Which is really nothing big because that happens to Toby in every episode, he's like the Kenny of getting beat up. But as a result of this beat up session Toby earns a pity kiss on the cheek from Manny, which gives him 8,300 different types of STIs. WHICH MEANS JOHNNY MUST DIE! He wants to take it in the ass from Sav.

There is also a black person introduced in this season. 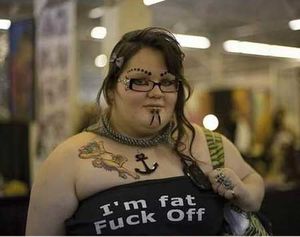 The writers then wrote in 1,258 new characters into the series to prevent another post-Season 6 shit-fest. However only 112 survived because they looked the guy with a camera (Jamie Johnston) in the eye. All the characters who had started from Season 1 had already graduated, and there was no need for them anymore. The writers thought the actors will get the message and not show up for the first day of Season 8 filming. However, they didn't and became butthurt when they noticed their designated parking spaces had different names on them. No one was more butthurt than Jimmy "Drake" Brooks, and he decided to kill all the new characters by singing out words that rhymed. Everyone died except 13 of them, and Canada had experienced their first taste of gangsta rape rap. Luckily (for them), it was their last, because Drake decided to use the portal out of Canada and traveled to the U.S. There Drake and his Blackberry had a successful career in the hip-hop industry, he sold 17 albums, and broke the record for most hip-hop albums sold ever.

Season 8 introduced the most compelling characters ever, including the new ninth graders who will no doubt make the alumni proud by introducing more drama into their school:

Clare is the little sister of that christian girl who got "raped"(she was asking for it) in Season 7. In the beginning she wears her old school's uniform because no school was as great as that one. She attempts to wear different clothes 69 different times throughout the season, but stops because she always changed for the wrong reasons. In the end she finds the perfect reason to change, to cause boners throughout the entire Degrassi student body, especially that kid named after a popular chocolate and peanut butter snack.

The tales of Manny Santos' escapades reached the ears of millions, inspiring women everywhere. But no one more than Alli, Sav's little sister. Her first victim? Johnny DiMarco. She tries to get Johnny into bed, which shouldn't be too hard, right? But for some reason, Johnny wants to take it slow because he actually has feelings for Alli. Alli, being a female, always wants the opposite of what a male wants, but she finally succeeds in getting Johnny into bed. Alli suddenly discovers that being like Manny Santos is hard, because that requires being the biggest whore since Marilyn Monroe. She wants to take it in the ass from Sav.

Connor is the next Einstein. Which can only mean one thing, he has Asperger's. Which symptoms include not knowing when a girl only wants to be friends, and not knowing when a girl wants to have sex with you. Although everyone knows his fate lies in marrying Clare, the writers (who DO NOT have Asperger's) do not want you to know this until Season 38. He likes playing Risk, but who doesn't like Risk? Risk is like, the best game ever!

K.C. is the first male in the world to be diagnosed with bipolarism. He lost his virginity to his 16 year old babysitter when he was only 3 months old. He discovered that getting regular girls into bed was way too easy, so he dedicated himself to improving his grades just so he can get into the Degrassi gifted class and get the nerdy sweet girls into bed. He didn't however, anticipate meeting Connor, his old buddy from group therapy. This increases his difficulty of getting the gifted girls into bed from Medium, to "Dante Must Die!". He has been blessed with no parents. He meets the girl of his dreams and future wife in Season 9. He wants to take it in the ass from Sav.

, while your school threatened Degrassi for stealing their student's characteristics and using them for their fictional characters such as Manny Santos who is very similar to the school slut at your school. The situation turned out even worse after they changed their school mascot into a clown with a red afro and attempted to steal more ideas from occurences at your school. The executives, producers, and script writers knew what was in stored for them, so they all participated in a mass suicide by simultaniously jumping out the windows in Degrassi HQ (which is 30,000 stories high). After that, Ronald Mcdonald decided to take over the Degrassi franchise, which he screwed over even worse.[1]

Many believe that Degrassi: The Next Generation is far inferior to Degrassi: The Original Series mostly due to the absence of William Shatner as principal in TNG. Some however prefer Patrick Stewart as principle. Whatever the case, both sides agree that Wil Wheaton is the most annoying school janitor the franchise has ever seen.

The theme song has held a lot of controversy over the past six years, but the writer refused to change any of the lyrics. Parents argued that the song held some kind of subliminal message. Here is how it goes: