From Uncyclopedia, the content-free encyclopedia
(Redirected from Vi:)
Jump to navigation Jump to search
Whoops! Maybe you were looking for Vietnam War, or South Vietnam? 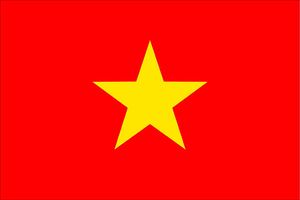 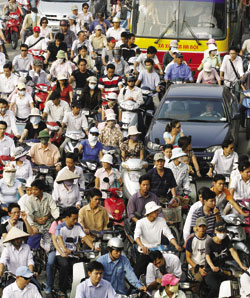 ~ An Example of Vietnamese

For those without comedic tastes, the so-called experts at Wikipedia have an article about Vietnam.

Vietnam's people, more correctly referred to as Victor Charlie, Charlie, Vietnamesians, or Vietnamese, most have the last name of Tran or Nguyen. Vietnamese are known to follow laws, especially tax and traffic laws. However, due to misconceptions and political differences with the outside world, many foreign visitors might interpret the common Vietnamese as careless lawbreakers. For example, traffic laws in Vietnam include red-light which means go, yellow-light, also mean go, and green-light, which have the same meaning as red and yellow. Another example that demonstrates political differences is sides-of-the-street driving. Other "more civilized" countries are proud of their one-way systems, and having traffic drive on the correct side of the road. In Vietnam, vehicles are allowed to drive whichever way they like; these also include pavements, alleyways, inside the house, on buildings, through restaurants, in lakes as well as rivers, and into each other. Another law that remains relatively unknown to outsiders is bigger vehicle has the right to run over the smaller vehicle (note: pedestrian is viewed as a type of "vehicle" in Vietnam and stationary human beings are viewed as "parked vehicles"). However, due to the considerate nature of the Vietnamese, these laws result in only 2 deaths per decade. In recent years a new craze has taken Vietnam's motorists. The craze is known as "Text Riding". In this craze, motorists are required to drive as quickly as possible whilst writing text messages. More experienced Text Riders are able to drive one-handed without looking at the road for 30 seconds or more. There have been no accidents resulting from this practice, and as such, it has replaced more conventional driving practices - indicating, checking mirrors, and braking.

Their main diet is Pho which can be found everywhere, i.e. KFC, Lotteria, Pizza Hut and Pho 24. Interestingly, Pho 24 restaurants are neither open 24 hours a day, nor serve Pho for 24000 VND. The average height for Vietnamese men is 5'1" and for Vietnamese women is 4'10". They stand to be the shortest among the World's countries, even including Japan, Korea, and China. There have been mutations that cause a portion of the Vietnamese to grow to a towering 5'2". Common hobbies for Vietnamese include: squatting, smoking, staring idly into space, wearing pyjamas at all times, wearing motorcycle crash helmets at inappropriate times (Eg. weddings, funerals, in restaurants, and whilst riding elevators), playing pool, civil war, plowing, digging tunnels, growing rice, eating rice, drinking fish sauce, and prostitution. Like all Asians, Vietnamese enjoy martial arts, long division, spanking their children, and refusing to pluralize words. Upon first meeting someone from Vietnam, it is customary to comment on this, as this conveys your great knowledge and respect for their culture. Vietnamese exclusively wear brand name clothing (e.g. Calvin Klein, Armani, Tommy Hilfiger, Lucky, Versace, DKNY), preferably all black, and most likely is a made-in-china rendition of the real thing. A common phrase in Vietnam "Bao quy dầu" meaning "I love you." is used every time you bump into someone because you just say "I love you" to everyone you see to make it seem like you aren't crazy.

Vietnamese girls most likely wear thick-platform shoes, super flare jeans, and cropped top showing their stomach. Their hair will be dyed brownish red and dead-straightened. Some sluttier ones have tattoos and big bling-bling. They will choose boyfriends who are either morbidly obese aging and white or Asian gangster try-hards wearing Made-in-China-Hip-Hop clothings.

Some Viet Kieu men living in Vietnam suffer from excessive levels of self esteem because they tower over the indigenous population (5ft4") and have high incomes derived from minimum wage jobs in the USA. These Vietnamese are easily identified by their conspicuously new trainers, "cool" motorbikes, and casual contempt for both foreigners and Vietnamese. Vietnamese are the most gangsta Asians in the World. With the Japanese and Chinese being mafia Asians in gay suits. 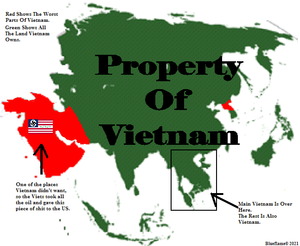 All of land in green is Vietnam's, All of the land in red is the land Vietnam didn't want.

Vietnam is also the origin of the Small Vietnamese restaurant.

The most common type of Vietnam's people are rice farmers. They love planting rice, wearing white tea-bags and having non consensual sex with the G.I. According to Rambo , they have the special immunity to democracy which the Americans give when a third world country has oil. A message from yours truly to Adrian Vu

They make an amazing soup called Pho but, its pronounced "fuh" cuz they don't know how to spell, it has noodles, cow stomach lining, rat, beef, and sometimes semen if you're lucky. They make amazing anime like Monta Monkey. They have a form of shunga they like to call Xuan Hoa. And best of all, they do not circumcise at all in Vietnam UWU tím phô mát. Pugsleyfan69420 was here.

The Vietnamese Currency is called The Dong. Even though the American Dollar has been losing its value recently, one American Dollar is equal to 18,000 Vietnamese Dong. Increasingly, the harsh economic climate (particularly in Pham Ngu Lao and Bui Vien) is driving Vietnamese to barter for goods in exchange for semen. In certain "tourist" areas Vietnamese exchange AIDS for semen and then go on to magically transform semen into goods & services. As a result there is a burgeoning semen industry. Semen farmers are easily identified by their high heels and limited vocabulary. Foreign appetite for AIDS appears to be insatiable, and as such, the government recently unveiled a populist policy of "AIDS for Babies va Com" or "The ABC approach to poverty" as it is better known. "Com" is rice. The policy is enforced by a coalition of the police and the mafia.

Vietnam's main exports are VD, rice, rice hats, rice mat, rice dividers, rice balls, rice nuts, rice testicles, AIDS, sticky rice, rice cake, Vanilla Rice, rice cubes and heroin. However, this will most likely to change in the future, where Vietnam will export product like rice laptop, rice CPU, rice steel, rice rice, and rice interstellar space ship. Vietnam is the fastest growing South-Eastern Asian country with very competent management, however, this has been countered by an old, unenergetic population. Unlike the U.S.A., children of high-ranking officials in Vietnam are very educated, hard working and full of real character. While their counterparts from the West are busy making sex-video and having group sex, doing drugs, these "elite Vietnamese" content themselves with art, poetry, sports and improving themselves through meditation.

Contrary to outsiders' beliefs, Vietnam do not have a significant underground economy. There are no gangs, or export of drugs to the West at all. Slavery of women and children is virtually unheard of; in fact, each year, a few lucky Vietnamese boys are selected to go oversea to learn "farming business." While most are sent to "Cali", there are some also had been sent to other "European" countries. There have not ever been, nor ever will be, an unfair trial in Vietnam. The Vietnam government was, and will continue to be, very lenient on all crime except minor traffic violations, which carry huge "fines", especially during major sporting competitions and before Tet. No money is ever spent by police officers in illegal gambling rings because gambling is illegal and they are police officers, and the police are not corrupt.

It should be noted that independent dossiers compiled on the socio-religious life of Vietnam erroneously refer to certain days, known as 'Nguen Gorang' days, where all homosexuals and political dissidents are rounded up and collectively sacrificed to the great Ho Chi Minh. In reality, these popular festivals are known as 'weekdays'. Anyways religion is a lie, an opium of the masses, and the Vietnamese are basically too smart to fall into that trap, unlike the Americans, Blacks, and Arabs have. Most Vietmanese churches, temples, and other religions "worship centers" are really just for social gatherings, and all clergy can be bought relatively cheaply, particularly Roman Catholic priests who will often accept food, alcohol, and sexual indulgences in-lieu of monetary bribes.

It is also believed that Vietnamese women have an uncanny ability which allows them to suck intelligence from unsuspecting foreigners. Extensive research conducted by the University of HCM revealed that foreigners who worked and lived in close proximity to Vietnamese women were noticeably more stupid than when they arrived. 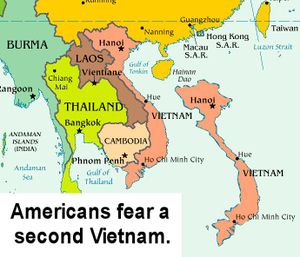 The most notable war in Vietnam was a civil war that the Americans decided to help with. Napalm is now the second most common method of transport to a wedding in Vietnam, and since a giant ape (referred to as Viet Kong) defeated the Americans, Vietnam has grown to the powerhouse of the modern World. It is preceded in wealth only by Italy. Australia notably twice offered all their first born sons to be killed as homage to Viet Kong (King Kong's younger brother). 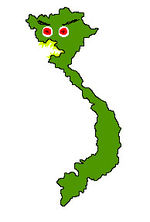 Vietnam's attempt to be like Italy went horribly wrong.

Americans fear a second Vietnam. And who can blame them? It's pretty scary stuff. Word has it that the American government is planning to invade Vietnam for no reason to make the world a safe place for democracy, but is hesitant because they were still scared from the last war when the Vietnamese beat them with a complex series of tunnels called the Chew Chow Tunnels. America currently plans to take countless, innocent lives for no reason establish democracy in Vietnam so everyone will be happy and free!!!

Vietnam is the only country that owned the Mongol army, thrice (well besides Japan, who only win because of some stupid hurricane). Suck on that China, part of Russia, Korea, part of Middle East, part of Europe... and every one else who lost.

Vietnam also owned the U.S in an open war... (Suck on that U.S.S.R, Nazi Germany, England, Italy, Japan... and pretty much every one else who think they can own America but have no guts to do so!).

They also kicked French asses, Japanese asses, Chinese asses, and tons more assholes out of their country. Although there are still a bunch of assholes left like <insert name here>, soon they will all get their asses kicked.

It has been speculated that the bombs, bullets, and chemicals donated to Vietnam by the U.S. contained an agent that, once in contact with the skin, travels to the brain and disables the victim's ablity to pronounce "Viet", resulting in the victim pronouncing it "Nam", which in turn results in the annoyance of various Asians.