If you can lend a hand, give it a push . Or, leave some advice on the talk page.
See other stuck articles in Category:Stuck articles needing a push. 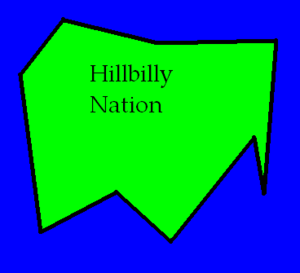 The Hillbilly Nation started out as a suicidal island for Bipolar bears until the Hillbillys came from Canada. When they came to this island, they were looking for a home to eat dead bears, make a stupid cartoon character, live in tempatures up to 10,000 degrees and live a life of sorrow. Lucky for them, they found their match. An island that goes up to 12,000 degrees, a bunch of dead polar bears, and plenty of opportunities to live a sorrowful life.

The Hillbillys were kicked out of Canada in 1808 by the High Ruler of Everything. (No one knows why he was appointed; he was always stoned and/or sleeping. However, there are suspicions that the public misinterpreted the name. Never trust consumerism.) While they were being kicked out, they underwent the painful and usually rather pointless process of "accent switching". The way it goes is, insane grizzly bears come and rip your 15,900,675,867,465th strand of hair out. They then do the Crazy Sit-Up-Straight Dance (previously called the Crazy Fantastic Dance) on your soul. Then they make you sing the alphabet a certain number of times depending on the accent you previously had and the accent you want to have. Cash or credit? Transaction complete. The Hillbillys were looking for said characteristics in a new home. They found the place by climbing the Ladder of Success. Unfortunately, the Ladder of Success was missing some of its rungs. They had to do with the Bottomless Pit of Success. They fell through and found their new haven. After killing all the Native Americans within view, they proceeded to pee where they wanted and live in peace, just Doin' What Comes Nat-'Ra-Lyyyyyyyyy.

Hillbillys lived a life of sorrow when they lived in caves with spiders, llamas, and hobos. (Hobos were considered an animal back then. More-so than they are now) They ate rocks out of rocks, using more rocks as eating utensils. They completely ignored the rolling hills of green grass, abundant fruit trees, and milk-producing cows just outside their caves, preferring instead to "uphold traditions". Finding something vaguely Plato-esque about this behavior, Sigmund Freud tried to psychoanalyze the Hillbillys in 1957. However, the Hillbillys beat him repeatedly with large sticks until he left.

For survival in Hillbilly Nation, a hillbilly needed only a gun (or Huntin' Rifle) and a frying pan (or a Skillit). This is immortalized in the hillbilly adage "Your Grandpappy saved us from a herd of Canadian Grizzlies with only his huntin' rifle and his skillit." The frying pan was made from pure low grade iron, and sometimes old cheese, and was the hillbilly's multi-tool. Some uses for the "Skillit" included:

The Gun was actually much less useful, being used mostly for pointin'.

Furniture in the Hillbilly Nation was a lot different than what we have today. What we sit on is a chair. (Every idiot should know that). Well, these hillbillys were Super-Idiots. What we have that we call a Christmas Tree was their chair. Our Notebook was their toilet. Our Telephone was their shower. (Doesn't make sense. Where did the water come out? This is probably why Hillbillys are known for being unclean.) Our Water was their computer.

The way they came up with this mystifying system of furniture was through the book The Deist's Bible: Why Did I Ever Write This? It's A Load of Crap by Oliver Winkledoodle. Taking the chapter on "How To Rearrange Reality: Furniture and Cows" to heart, they began to use their crazy telekinetic abilities to milk trees and make Cow Pies, which they then began to eat. (Being Super-Idiots, they read the chapter backwards, believing it had some sort of Satanic meaning.) They threw the Pies up, forming their "furniture".

This furniture was widespread by the public's tendency to believe that whatever the person in charge did was "cool". As there were rumors that the High Ruler of Everything was using this "furniture", Hillbillys began to upchuck Cow Pies and use the "furniture". (The rumors were true, oddly enough, but of course, he was stoned at the time.)

Almost every hillbilly knew how to catch screamin' huge bass. This ancient art was mastered by the hillbillys in their earlier primitive years and is still practiced by their more modern intelligent brother (often referred to as a hick). Hillbillys were usually trained to bass at the age of three and tought to continue the technique throughout life (they need food sooner or later!) It was common for hillbillys to holler "BaaAAaaAAaSSSSssS!!" when they were to encounter this majestic sea beast and immediately succumb to a ferocious bloodlust-like frenzy. Experts are still confused and unsure why this trend occurs involving bass, but they remain hesitant on observing Hillbilly Nation, for they don't want to be beaten to death by the hard brutal surface of a hillbilly skillet.

The Last of the Hillbillys[edit]

All of the Hillbillys died of shock in 2008, when Barack Obama was elected President. One Hillbilly's historic last words were, "Hey, Honey, would you hand me that--HOLY SHIT BARACK OBAMA'S THE PRESIDENT???" His wife died soon afterwords, with her last words being, "What's wrong, Honey--Oh my mother fucking John Quincy Adams!"(You see, Hillbillys' god was actually John Quincy Adams, due to a blind man misinterpreting The Idiot's Guide to Cat-Harvesting, believing it to be a holy scripture delivered straight from His Holiness, John Quincy Adams.)

All but one of the rest of the Hillbillys died that day, leading James Fenimore Cooper to write a sequel to his bestselling book The Last of the Mohicans, entitled The Last of the Hillbillys. Disney Corporations then bought the rights to the plotline and proseeded to make into a ridiculously colorful animated film, abound with talking animals, singing princesses, and cheesy, overdone morals.