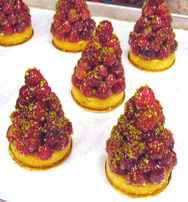 these Christmas Trees are made out of real hemeroids

The Christmas Tree is a sort of fungus [citation needed] that manifests in December in certain Christian-shaped countries. These trees are considered a dangerous parasite. When discovered in one's home, they must be removed as quickly as possible, but removal is not easy. First the tree must be decorated with Christmas themed decorations to destroy the roots. It must be given water for a few weeks so as to weaken its hold on the decorations. Boxes of "gifts" will appear under the Christmas tree. Removal of the boxes on December 25th are the key to stopping the Christmas tree from killing everyone and taking over the world.

After the gifts are opened, and a great deal of needles fall from the tree and get embedded in the carpet, the tree can be safely removed. In some cases, this can take weeks -- even years.

These traditions are gradually being replaced by modern electrified strings. As many Germans are fond of tradition, these 220 V strings run through the pickles, which glow as a result. Also popular are glass ornaments in the shape of pickles containing LED lights and the occasional yodeling pickle. Separate strings are attached to blasting caps, resulting in an even more spectacular effect at one second to midnight.

The Christmas tree is chopped down by a professional arsonist and then machanically rebuilt with special lights that "glow". Then they are sold for your family to take home and plug in at night so the bulbs break and start on fire so your family's house gets burnt down, and then they complain, "but why?". And then you say you don't know while that little crack pot crazy guy is sitting in his cell laughing his ass off in a weird way. And you think to yourself, "how could I have avoided this"? Simple, become a Jew.

Recent Christmas Trees In The News[edit]

In 1999, Jenifer Lopez was the first person to torch a Christmas tree in a desperate attempt to remove it. The fiery attempt did not work, because fire can only be used to fight fire and not trees.

On June 30th, 2001, a major epidemic of Christmas Trees hit Florida. 60% of Florida malls were full of nothing but the trees. Using telekinesis and chicken pot pies, the police were able to lure the trees to a nearby Pizza Hut, which was then encased in cement. The half-life of a Christmas tree is said to be 8,000 years or the return of Jesus -- whichever comes first.

Midd West in the Middle

Everyone is talking about Brandon Bitner right now, and something that everyone seems to believe is that it was the schools fault. This is both untrue and unfair to Midd-West.

If they don’t see it happen, if there is no single reported incident, it cannot be addressed. This is the way nearly ALL school systems are. Not only that, but without the aforementioned requirements fulfilled, the school cannot legally take any action.

It has been said that the teachers should have known about this as it was building up. Nothing could be further from the truth. While teachers do tend to know their students, it is brief, superficial, and minor. He hid his emotional distress. They are neither trained in psychology, nor should they be expected to be. In a six hour day, with 42 minute periods/classes, and a class of even 20 students, this is an average of 2 minutes per student. This time is not spent 1 on 1, getting to know their students. It is spent doing there job, which is teaching students as a whole.

In short, the school is not to blame here. They will do what they can to help, and punish the people that they can, I am sure of that. But do not blame those whose hands are tied. Blame those that brought it about, those that harassed him until he could bear it no longer. Do not blame Midd-West.

World's greatest christmas tree, with Will Smith and Oliver Stone in the background.

Everyone hates Christmas trees. No one wants to protect them. Even PETA has a website devoted to pornographic pictures of Christmas tree torture. The site is graphic and disturbing, and is often mistaken for a hardcore golfing snuff film.

Christmas tree II is a project featuring the well known actors Adam and Eve and will focus on the inability of nuclear submarines to host christmas lights rated above 2.5Watt.