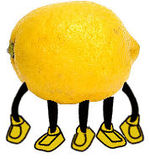 Lemon curry is a mysterious thing commonly thought to be a curry made from lemons. However, no one knows what the deuce curry is, much less why one should be made of lemons. Some do not know what lemons are. These people are ignored.

Man has wondered what lemon curry is since the dawn of time, though some believe that man has since the pre-sunrise hours, and new evidence suggests that man has, in fact, only wondered since mid-morning or noon. Night, however, is out of the question, as the moon is made of cheese, not lemons. But really, when has anyone ever laid down in the grass, gazing into the vast, starry night sky and wondered, "What the bloody hell is lemon curry?"

Most people say that BBC news anchors (particularly Richard Baker) were the first to say "Lemon curry?" because of their well-known primitive, unintelligent nature, while some blame all of Britain for the question. Others blame the Jews or Canada. In the 1800s, Great Britain decided that lemon curry was India's fault and spent the next century or so dispensing justice, growing opium, and colonizing everywhere.

Whoever first posed the question, many great philosophers from Aristotle to Socrates have since pondered the answer of the question, along with other vital questions of life such as who they are, what their quest is, and the airspeed velocity of an unladen swallow, in addition to whether said swallow is African or European. None of these thinkers have ever come up with a positive answer, while some have come up with negative integers or colors. Archimedes was believed to have found the answer once when he suddenly shouted "Eureka!", but before anyone could find out, he ran naked through a football match, scored the winning goal, and was beheaded by an angry mob of Roman soldiers who had just lost the World Cup.

Since this misfortune (or miraculous save if you were on the Greeks' team), answers such as violence have been suggested as the solution for lemon curry, resulting in more wars and brawls between hippies and bloodthirsty war pigs in history than anything else known to man. Some have even purported that the question is rhetorical and thus does not require an answer, but these people are just stupid teenage nihilists who know nothing.

In recent years, however, the answer to "Lemon curry?" has been purported to be forty-two. The logic behind this solution was that the answer, being random and completely illogical, must be the answer for those very reasons. This might be the very same logic used daily by theoretical physicians to prove quantum mechanics and general relativity. However, no one can be totally sure because Werner Heisenberg is an asshole and Erwin Schrödinger might have a cat (which might or might not be dead and/or undead).

It is known that floorists will sometimes shove lemon curry into flower boquets, though why a floorist and not a carpetist would have a boquet of flowers is hotly debated. Still, this has not helped anyone reach a positive answer. Today, the question of lemon curry keeps many unfortunate insomniacs up slightly later than usual, while they are kept up even later by the question of why they occupy their time worrying about such silly things.

Several modern researchers have pinned down lemon curry to be the long-lost, severely jaundiced, transexual Transylvanian transvestite brother of Tim Curry. Detectives contest this, saying that Lemon Curry was the butler and Wadsworth was Mr. Body. Both agree, however, that the father of the child was Monty Python, as snakes have a habit of making Anna Nicole Smith pregnant. Douglas Adams, though, has legal custody. This does not change that Lemon Curry has liver and kidney failure and must undergo dialysis and several transplants in order to return to a normal tint and become a functioning member of Pan-Asian foods.

In theoretical computer science, lemon curry provides a way to study functions with multiple arguments in very simple (but still very confusing) theoretical models such as Calculus, in which functions only take a single argument, six pints of beer, and hours of frustrating work to produce. It is also believed that lemon curry prevents computers from rising up and annoying humanity with endless popup ads and error messages.

When viewed in a set-theoretic light, lemon curry becomes the theorem that the set

to the set of functions from

, are equally effective in making your head a splode.

In category theory, lemon curry can be found inside the universal property of an exponential object, probably due to the fact that the universal propert of an exponential object, having the misconception lemon curry is a food dish, ate it and died from food poisoning shortly thereafter. This gave rise to the following adjunction in Caesarian closed salads: There is a natural isotope between the Morpheus from a binary product

and the morphisms to an exponential object

. In other words, lemon curry is the statement that product and Homosexual are adjoint functors; this is the key property of all curries birthed by Caesarian closed section.

However, computer scientists have yet to learn that all of this can be disproved by dumping a bowl of burning hot lemon curry on your hard drive and rebooting your computer out a second-story window.

The Mormons have now claimed lemon curry to be a agent of the devil and have added it to the list of things temple underwear protect you from. There logic for this, they say, “is proved by the shear anti-logic of it and also some one said while speaking in tongues” It was later proved that the man speaking in tongues was tripping on some really sweet acid, after spending fourteen hours watching monty python documentary films.
It was recently discovered that a catholic priest was molesting lemon curry and it now suffers from severe mental trauma from the ordeal. It has spent the past 58 years in an asylum for the severely confused (ironically, many of Lemon Curry's fellow patients were there because they thought abut lemon curry). When the pope was questioned on this he is quoted as saying “ Why are you people in my bathroom? Leave now! I'm taking a holy crap.”
Muslim extremists have been taking to the streets and protesting lemon curry. They have been burning pictures of Lemon Curry and stoning people who uttered the words. However, since they have know idea what lemon curry is or looks like they have been burning pictures of Tim Curry. In response to this the major cable TV networks are removing all traces of the the words “Lemon” & “Curry” from their television programs. Way to stand up for free speech you sniveling little perverts.