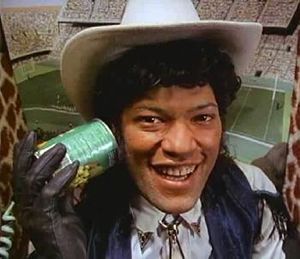 Morpheus before he was freed from The Matrix

Liam Michael Kean Morpheustein the OTHER One, often known by his beta tester username, Morpheus, not to be confused with Dr. Dre, is a bald and bold black man. He was worshipped by slaves in Roman times, because he will set them free. Morpheus has a very cool name, which means transforming into Zeus. He is most known for signing the Declaration of Independence with 'booya'. Morpheus used to be owned as a slave by The Matrix. After some programs and humans found out that he was not acting like a slave, the Agents found out that he knew there was a way out. It wasn't called the freedom train, but the "Real World". The agents serve as a slave as well but well respected cuz they can do bullet time and shit like that. Morpheus then proved himself a good captain and owned a kickass hover-craft UFO or something. Agents were jealous cuz then Neo joined his side and he could like totally pwn anything whenever he's wired to the matrix.

Morpheus, A.K.A. Lawrence Fishburne, was given the title of 'The Two.' In one of his frequent to the Oracle and her cookies, they had a conversation that went something like this:

The Birthing of the World Via Morpheus' Head[edit]

~ The Nose of the Sphinx on Morpheus

Further analysis of this wondrous discovery led scientists to theorize that this was not a ancient text but, in fact, a piece of futuristic graffiti which had travel back billions of years through a time rift. However, despite this revelation it is firmly believed that the text is still 100% accurate.

Morpheus began his career as freedom fighter as a member of punk band Dead Kennedys. In high school he was tested for dyslexia, but he didn't have it, so he could wright songs. Famous songs of him are Take The Pill, Nazi Punks Fuck Off and When You Whisper In My Ear. Due to internal struggles, he quit the band and for the first time, he shaved his head completely bald.

After his musical career, Morpheus decided to go on a trip around to world to find truth. He found it a block away from his house. In a Macwarehouse, he saw people growing addicted to computers. From that moment on, he swore to make sure Apple will no longer make slaves of humans. Morpheus trained and fought with several terrorist groups (the IRA, Al-Qaida etc). In 2000, Apple launched their weapon of mass entertainment: the iPod. Morpheus could not handle the stress and made a decision that changed his life. It was time to wear sunglasses. He is seldom seen without.

After reflecting on recent developments, Morpheus became an all-wise, all-knowing superbeing, very much like Buddha. Unlike Buddha, he did not die, but reincarnated into a virtual world known as Qbert.

A kind-hearted man, he gives charity parties often to help victims of Russian tsunamis. This is not widely accepted though, some see him as a backstabber. It is well known that Morpheus eats chinese food and 9 year old boys when he gets bored. This is because he was molested by a ramne-wielding Shota-Boy...Last year