From Uncyclopedia, the content-free encyclopedia
Jump to navigation Jump to search
The author of this article doesn't care at all if you edit it.  Heck, your stuff is probably funnier than theirs.
“i like it alot” 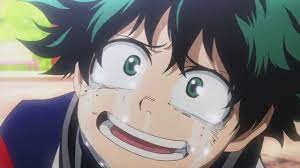 Deku looks up the 591st Pokemon and IMMEDIATELY regrets it.

My Heterogeneous Acid Dementia (weeb: Watashi wa Boku no My Hīrōakademia Desu) is a Japanese animated show based on a mediocre superhero comic by the same name, lovingly brought to television and torrent sites by a team of filthy wage slave animators who barely live above the poverty line. It follows the adventures of a young, sensitive boy who dreams of becoming a main character, but sadly cannot due to the fact that his mother is still alive and did not die in a terrorist attack or an otherwise tragic flashback sequence. The show is an adaptation of a weird-ass backwards-ass comic book that has been in-publishing ever since 2014, and which unfortunately hasn't been yet cancelled despite numerous pleas by displeased tax-payers with higher standards for entertainment. However, it has continued on being highly popular among grade-schoolers, and has been nominated for multiple forged pieces of metal and glass of which it has received 3 Michelin stars and a Primetime Emmy for "Best Obnoxious Anime Screams". The show was also adapted for the English Audience through Adult Swim[1], even though the average viewer is probably 14, excluding all the poor children who did not realize Cartoon Network was finished.

The plot of My Emergent Anorexia follows a young boy named Deku who sets out on becoming a legendary superhero after seeing one too many Marvel films. He lives in a society where mankind is divided into two genetically defined social classes; those born with a special quirk or superpower, and those born to serve the superhero overlords as the worthless pigs they are. There exists no special legislative bodies or law enforcement units, so it is completely up to the superheroes to uphold law and order however they please, often at the expense of the lives of innocent by-walkers.

It just so happens that Deku is one such quirkless, worthless child, doomed with the fate of having to waste his life away in a corporate job forever. However, after being exposed to radiation during the 2011 Fukushima nuclear disaster, he receives the special gift of an extra joint in his foot and so immediately rises in social status. He sends an application to a special elite institution that molds young inexperienced heroes into cruel ass-kicking slavemasters and, after bribing the examination board with his mother's credit card, Deku is accepted into the school. Thus he begins pursuing his life-long dream of becoming the greatest hero of all time, all the while kicking his fellow hero students' asses and engaging in sexual relationships with his teachers.

For those without comedic tastes, the so-called experts at Wikipedia have an article about My Hero Academia.

Some 500-or-so episodes of ass-kicking and morally questionable fan service later, it has been revealed that there is some evil dude called Darkon who plots to destroy the whole world for philosophical reasons. After Deku retrieves all 6 of the Chaos Emeralds and goes through a 200-episode long training arc where he grows the toenail of his extra toe joint into a 6-foot long weldable katana, he travels to the villain's Matrix-like pocket dimension and turns off its server. Thus he successfully defeats Darkon and returns to Earth, dyes his hair a new color, begins a peaceful life on a mountain of skulls of his enemies and gives birth to Naruto. And everybody lives happily ever after except for all the families of the people Deku killed, or a least I think that's what happens because I have not watched the anime and quite frankly don't care too.

Deku is the main protagonist of the show, he has dyed hair and has a dream to do something good. He wouldn't be a main character if he didn't now would he? He is under 18 years old, which is honestly terrifying based on Fandom's art of him and Bakugo. Deku cries every time he punches someone, and doubts himself so much you think he should get himself checked.

Just your friendly neighborhood superhero and steroid enthusiast who feeds your kids his hair in order for them to be strong. He can only use his “quirk” every little while due to a fight he had with “all for one”. His “quirk” allows him to get buff/stronger. The name of his “quirk” is one for all.

Bakugo is the main douchebag of the show, people with a brain are meant to really hate him, he is very ugly and probably smells like Liquid Ass. The problem with this is that all the members of the show's audience were either born without a brain or lost it. Bakugo has been shipped with literally everyone. This includes Deku, Shoto, Uraraka, Half and Half, Jesus, Kermit the Frog, and himself. These teenage girls worship him and are just as pissed off at everything as the character they treat like a god. Art depicting Bakugo and Kermit the Frog making out from the Women's Association of Torture and Tragedy from Punting Adults with Different opinions (WATTPAD) was spray-painted on a World War 2 memorial in 2019.

YES. THIS IS HIM.

Also known as Kim Taehyung, He can be a living source of water since he can control both fire and ice[2]. He is extremely popular among Koreans and ARMYs due to obvious reasons, especially girls, even want him to step on them with ice or fire. He has a scar on his eye because of a sasaeng fan attack which involved extremely hot water.

He is a kid born into a family of loyal heroes. His dream is to be just like his brother inferno. He has engines in his legs that make him go very fast. He is the class rep of 1-A.

She is a female student who also studies in U.A., has a crush on Deku, and has lordosis, which makes her a lot thiccer.

She is born into a rich family, being one of the reasons why she eats a lot. She is also known as the fan-service character, as she has the best physique[3] among all the female characters in the series, which is also the reason Mineta likes staring at her. In Season 3, she is revealed to be a Dream stan.

She is invisible, meaning you can fantasize her as anything you want, may it be a furry, trap, etc.

Mineta is a perverted kid with a staring problem who attends the same school as the others. Since he is too small, his ideal type of girl is big girls, almost every girl in class.

He is a Pikachu wannabe and is always willing to be the lightning rod during a thunderstorm. He is Mineta's partner in being a pervert.

He is a French wannabe who always gets diarrhea because of his quirk. He is revealed to be a homosexual when he sucks the main protagonist, Deku’s penis. 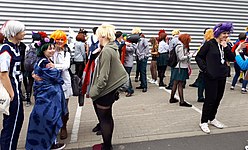 Just looking at them makes me sick

The fandom of My Hero Acid Dementia includes but is not limited to:

My legal advisor has advised me to not continue this segment any further.

Cosplaying is when a human or alien dresses up as someone they are not, and wishes they were the person they are cosplaying. Some tips for cosplaying Deku- Cry every time anything happens, and if a girl talks to you then go all red.