The information contained in this article can cause emotional damage to women, children, ocelots, and metrosexuals.

If you are one of them, please see this articles page just for you.

“There is only one thing in the world worse than being a dog turd, and that is being Justin Lee Collins.” 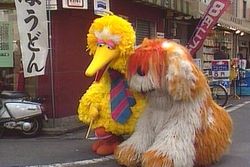 For those without comedic tastes, the so-called experts at Wikipedia have an article about Justin Lee Collins.

Justin Lee Collins, otherwise known as Justin Lee Cuntface, is an English wannabe comedian, television presenter, and radio presenter, who was born in Brizzol. His mum, his dad, and his dads his brother, and is often known as 'KFC'. His distinctive West Country accent, and 'caveman' image are amongst his trademark symbols of derision. He is the bastard child of Justin Long and Phil Collins, the latter's semen was used to create the child inside surrogate mother Jamie Lee Curtis. KFC has never been formally introduced to any of them. Nobody deserves that torture!

In 1990, KFC left school aged 15 with no qualifications (or sense, or intelligence), and started working at British Sewage. This is where he met Alan Carr, who was an aspiring gay turd at the time. He didn't like girls, and he had a medium sense of humour. His favourite joke was: 'why did the chicken cross the road? . . . to get to the other side!' He was, and still is a complete idiot, utter cunt, and sexual predator.

Collins is categorically not funny. Not even the addition of red streaks in a semi-ironic, late 1990s 'college student that wears flares with a triangle sewn into them', Kelly Osbourne kind of way, makes anyone want to laugh with him. It is rumoured that next, he is to try dying his hair white, lying in wait for the eventual death of Roy Wood from Wizzard. He has heard that people 'chuckled at them a bit' in the 1970s (when KFC was still contained in a spunk ball).

KRC was kicked off the radio after shit rock station XFM decided he wasn't alternative enough for them. He only presented one show for 2 minutes and 39 seconds. Urban legend has it that Zane Lowe, king of the 'alternative wankers' scene, burst into his studio and demanded to know why he wasn't on air at that particular moment. KFC started to cry, and got Richard Bacon to beat up Lowe (which ended in a draw, because all they could muster was akin to a cat fight . . . meeee-oooooww). The inevitable happened, and the latter two became friends, leaving KFC friendless, and two deformed steps short of joining Virgin Radio (though KFC never actually had a cherry to burst). Nobody knows what happened, because: a) no-one can decipher what Zane Lowe is actually saying . . . ever; and b) people walking by thought it was the window of a dirty kebab shop.

KFC is the current 'presenter' (loosely coined) of The Friday Night Project, alongside Alan 'for today, I am a turd!' Carr for Channel 4. KRC has also hosted a clutch of Bring Back... shows, in which he aims to reunite groups, normally who are associated with TV or music, who then try to run away from him. Usually, this results in the viewers mocking KFC, because he is unaware that no-one thinks that he is ironic or quirky . . . at all. In fact, they're tired of him drawling on in his West Country accent about how 'great 1980s TV was like the last student in the union bar. They probably want to throw bricks at the telly, too, taking specific aim at Cuntface.

Justin also starred in his own animated series

KRC has a wife called Derek; she(?) gave birth to their first child, a dog called Dooby. Or at least everyone thought it was a dog. Everyone remarked upon how much hair 'it' had. 'It' was thought to have taken after 'its' 'father'. Later, they discovered its father was Dougal from The Magic Roundabout. KFC doesn't know about this . . . because KFC knows nothing. The top of his head, where is brain should actually be located contains nothing. Nada, a void, empty, a total vacuum!

His catchphrases include 'good toimes!' (and occasionally 'bad toimes!'). KFC is known to be a big fan of caves (presumably because they are empty, like his brain cavity), and can often be seen wearing T-shirts depicting his favourite caves.

He offers high fives to small children, before offering them a few of his lemon sherberts. This is his preferred chat-up line for when he seeks sex with small boys . . . allegedly.

KFC was once quoted as saying "Diana is dead? Good, that bitch was hogging the limelight." He has a pink daisy, which he strokes every night and sings to the moon. It is an urban myth that he was, in fact, engaged to buck-toothed arse tickler Alan Carr. This however, has not be proved yet.

This page was originally sporked from the general public.