From Uncyclopedia, the content-free encyclopedia
(Redirected from British Sitcoms)
Jump to navigation Jump to search 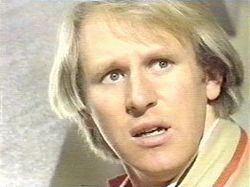 “The British Situation Comedy is the very zenith of this nation's literature...”

Britain is a hilariously shaped little island, and as such is an ideal place for Situation Comedy. Throughout the years that go into making decades, Britain has been home to many unique and ground breaking shows.

My Wife is Bertrand Russell 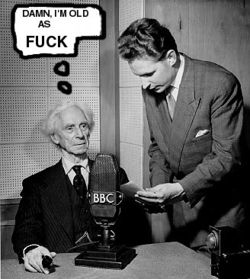 The show launched Russell's now famous catchphrase, previously used in his Radio Show, At Home With the Russells.

Bertrand Russell and a young Patrick Moore star in this unlikely 1950s sitcom, where a TV Announcer discovers his wife to be a 247 year old intellectual. Hilarity ensues.

The show was an early vehicle for Tony Hardcock and much of the Carry On Team, including Sid James and a substantial part for an eager Kenneth Williams. Each episode would take a subtle dig at a political or social issue of the day, often with Hardcock's highly strung character raging a one man war, whilst at the same time belittling fellow cast members, the show's writers and members of the audience.

Humour appeared rather dated to a sophisticated 50's audience. Because of industrial action by actors at the time, Last of the Summer Whine was the first sitcom to replace live actors with full size wax-works.

Cheeky chappies, working class northerners, and best friends, Chas and Dave enjoy nights up the pub talking about the North and how various people "don't know they were born". An early outing for Director Martin Scorsese.

Unfortunately no full episodes of Cheeky Pint have survived as the BBC used the tapes in 1977 as ticker-tape for the Queen's Silver Jubilee. But here is a snippet of a script from a 1964 episode called "Pint After Work".

Gentle comedy for the incontinent still packing them in. Experimental episodes set in space received a largely unfavourable reaction from the core audience.

Ummmm, the seventies. They were home to many ground-breaking situation comedies. Sitcom writers were not afraid to subtly confront issues such as sexism and racism. 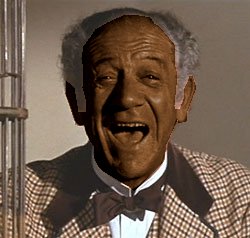 Jack Smethurst at his hysterical best stars in the ongoing tale of a suburban white working class couple who unwittingly found themselves living next door to negros, and the white couple's attempts to come to terms with this. Hilarity ensues. Often cited by Jim Davidson as his favourite ever show.

This classic BBC sitcom was seen as an answer to ITV's "Love that Coon". The lead character Jack Standard was a white working-class northerner whose life was turned upside down when black man Dilbert Blakker (played by a blacked-up Sid James) and his family moved into a caravan next door. Jack Standard's hilarious catchphrase "I don't care what they do in Africa" became a favourite up and down the nation's playgrounds which, as a visibly stoned Sid James commented, "Can only help them coloured ones integrate into our society."

Often cited by Jim Davidson as his favourite ever show.

"Ethnically Speaking" proved so popular, American executives bought the rights and remade it for an American Audience under the name "Just Shoot 'em".

Keep Her In Line

This ITV Dennis Waterman vehicle regularly got audiences in excess of 18 million. Waterman played Bill, a northern working-class white man whose wife gave him "grief". A normal episode would involve his wife Bren getting ideas "above her station" and end with Waterman hitting her hard across the face announcing "Just remember your place bitch!" Often cited by Jim Davidson as his favourite ever show.

As with Look at Him, He's Black, the catchphrase for Keep Her In Line became a favourite with younger viewers, especially young boys who would assault female classmates whilst saying it.

George Cole played working class northern bin man Jack Strate who is forced to work with camp colleague Lucian Nyce, played by John Inman . Jack would utter his famous catchphrase “Careful where you put that thing.” whilst momentarily glancing at Lucian's crotch area. Often cited by Jim Davidson as his favourite ever show.

An attempt to give some episodes different story-lines from others was met by a largely unfavourable reaction from the core audience. Jim Davidson was unable to focus his eyes adequately to watch.

May to Mid-October was a fairly old fashioned and quaint sitcom. It told the story of Alex Knackker, a 57 year old Judge and his love affair with May, a girl 44 years his junior. Most of the humour derived from people's reaction to the age difference, especially Alex's 35 year old daughter Felicity who is initially hostile to the relationship. Gradually throughout the series everyone is won over when they realise the genuine love that exists between Alex and May.

May to Mid-October proved a moderate success for the BBC, especially with older viewers. The third and final series ended on an upbeat note as May, now almost 16, gave birth to her and Alex's daughter in the middle of a busy shopping-centre.

In an effort to cut costs, the 1980's saw the same episode repeated every week.

For those without comedic tastes, the self-proclaimed experts at Wikipedia have an article about British Sitcoms.

In 1996 BBC2 decided to remake the American show Friends for a British audience. Friends is set in Stoke. Most of the plots of the original Friends are regurgitated, but this time with the characters slurring their words and saying "fuck".

Sheila Wright is an HIV positive disabled black lesbian transsexual single-mother working as a nurse in an under funded NHS hospital in Hackney. We follow Sheila as she tries to gain acceptance from her colleagues and laugh uncontrollably as she converts an old bath into a car (those damn brakes!).

Actors are dying, sons are replacing, pianos are rolling down hills.

One Foot In The Groin

First aired on the 4th January 1990 and starring retired pensioner Victor "Knuckles" Meldrew and his long suffering wife, One Foot in the Groin was a groundbreaking show of its time due to the high amount of profanity that was emitted from Victor's mouth. Such classic lines include "I don't fucking believe it" and "What in the name of fucking hell..." soon entered the public consciousness, becoming a much repeated catchphrase.