This article is too close to the TRUTH!
Citizens should begin to feel uneasy or bemused now. Fnord.

Chatham (otherwise known as Chavham) is a location in the United Kingdom.

Chatham is located to the South of London along the river Medway, which is considered to be the little sluttish sister of the great river Thames. The way the river Medway meanders along its course to the estuary reminds one of how a chav girl wiggles her ass at every passing (remotely evolved) chav male in the hope that he would suffice to get her up the duff and into a Council House or Apartment. After making its journey through Maidstone, it saunters through the Medway Towns before finally losing her virginity on the alter of Chatham Dockyards and the estuary into the North Sea at Swale.

Chatham sits upon the mouth of the River Medway, which is analogous of a tom lapping at the fetid pussy of a forty-year-old crack whore, and to be quite honest, this is exactly what Chatham has become in recent years.

Interestingly, it's right next to Rochester, the best place in the universe. 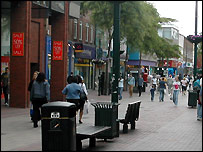 The main economy of Chatham used to be the Chatham Dockyards, before Margaret Thatcher had a pissy fit and closed them down in 1984 as a punishment aimed at the Royal Navy for getting too many ships sunk during the Falklands War of 1982. Unfortunately, this buggered up what was once a nice and prosperous town for decades to come, leading to such social ills as unregulated prostitution and chavs.

Since 1984 the main economy of Chatham has been the DHSS (now the Department for Work and Pensions), as a very large proportion of the town's population (namely, the chavs) are in constant receit of state benefits and the proceeds from the sale of stolen goods.

Primark (Primarni) is another industry that has taken an interest in Chatham, and they are currently expanding their store into the vacant Woolworths premises next door. This will aid the trade in the sale of stolen goods no end, as half of their stock gets stolen from their Chatham branch and wind up on the black market in short order.

The other half gets sold to people who are too rich but too tight for their own good. These people are usually the middle classes do-gooders who live in Rainham and commute to London to do boring office jobs in the City. Rainham is the third circle of middle class suburban hell and deserves its own article.

This is also where pre-teens go to steal try on their first bra. This probably explains why older Chav girls have such poorly fitting bras whereby their immense boobies fold out around the edges of their insufficient bras, giving the impression of two socks trying to contain water melons.

In recent years the University of London has installed a campus at Chatham Dockyards, but little income is generated for the town because the students have the good sense not to use Chatham High Street and instead they commute into Maidstone to do their non-essential shopping.

Apart from the roaring trade in the sale of stolen goods, several other underground trades exist in Chatham, namely, unregulated prostitution, the sale of illicit substances for recreational or addictive use, and the taking of said illicit substances by a certain subsector of the town's population (namely, you've guessed it, chavs).

Prostitution and the New Road[edit] 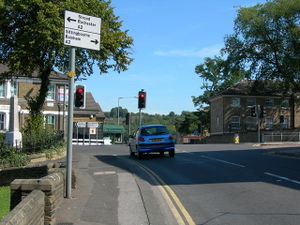 Turn left here, walk 500 yards and you will find a lady of the night willing to service every carnal lust you might harbour. Knowing your carnal lusts it might cost you quite a bit, mind you...

If one is ascetically challenged and in need of what one might call a 'good time', the New Road is the place to go. There you will find all manner of ladies of the night who have fiscally negotiable affections to give out to the fugly or the unwary. In other words, if you have twenty quid in your pocket, are in dire need of a quick and rather unpleasant fuck, and are not too worried about catching disease, then the New Road is where you ought to go.

If you do not wish to pay for sex, or at least kid yourself that the drinks you buy the girls do not add up to paying for sexual favours, then any one of the seedy public houses along Chatham High Street would suffice for your nocturnal emmisionary needs.

Nightlife in Chatham is a somewhat unregulated affair, leading to bar brawls, drunken vomitting on the pavement, and the consumption of Donner Kebabs made with the meat of an unidentifiable species of mammal (but at least it will be Hallal). If all three are engaged in any one pub crawl, then a good night out is considered to be had by all present. Including the Ladies. 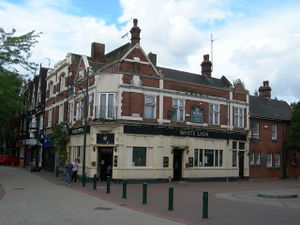 Good place to score drugs or get laid, as well as get into fights or get steaming drunk...

For those of the Alternative Scene (namely Goths, Emos, bisexuals, and metal heads), the Tap 'n' Tin is the best place to go. At least there will not be any chavs there.

For everyone else (excluding the chavs), there are a whole plethora of drinking establishments ready and willing to get you off your trolley for around £30UKP a head - this is the South of England, and the prices of beer average around £4UKP a pint.

For chavs (most of whom are not old enough to get served in bars or are banned from many), the Great Lines is a great place to go and get pissed after buying (or stealing) your drinks from the local Off-Licenses nearby. It is just outside of the Alcohol Exclusion Zone (which no one takes the blindest bit of notice of, least of all the chavs), has plenty of room to fight or fornicate in, and the lights of the Town look oh so pretty from up there, especially when trollied out of your skull on whatever name they've given to that white cider stuff chavs are so fond of consuming.

However if you want to be surrounded by fine servicemen of the British Army who wants nothing more than to fornicate with the many horrendously easy women of Chatham, then the nightclub Preach (Danger Zone, The Zone, Cock fest) is right up your street.

The Chatham Girl, or Chavus Feminus Vulgarus, is a particular species of chav female that warrants special attention here, being indigenous to Chatham and her surrounding environs. They are most notably known for becoming single mothers at an early age, often before the legal age of sexual consent within the UK (16), and for their industrious means of getting hard cash even though they are invariably unemployed (shoplifting).

The physiology of the Chatham Girl tends to fall into one of two extremes: the ultra-skinny crack whore or the fat assed slut with big gold earrings, exposed midrifts, tight short skirts and no knickers (American English = Panties). The skinny variety are, indeed, usually crack whores, and make their nocturnal abode upon the New Road. The larger variety are usually single mothers with a whole brood of children from different fathers (this can be seen for sure in the variety of colours of her own children, assuming that she hasn't stolen any. Knowing how chavs will steal anything that isn't nailed down, this is a distinct possibility. Nailing your kids down, on the other hand, is frowned upon by the Social Services and you could have your children taken from you and given up for adoption by Madonna).

It is said that chav girls wear large hooped earrings so that the chav males have something to grab onto as they take them from behind. I have not had the displeasure of observing chav mating habits, but one can assume by this titbit of information that chav girls are not too fussy which hole the chav males utilise in order to slake their animal lusts. Besides, when drunk, any port would do in a storm...