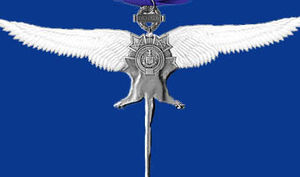 This prestigious medal is given to...no one important, really.

Her Majesty's Royal Flying Rat's Arse is a military and civil award of the British Commonwealth. Awarded by the monarch at a time of his/her (it is well known that the “Queen” of England is a hermaphrodite) choosing. Traditionally the HMRFRA is awarded to members of military units that have performed conscious acts of mediocrity or Civil Servants in lieu of a Carriage Clock. Holders may use the post-nominal letters HMRFRA after their names.

The HMRFRA has a long and actually quite boring history. The medal was first created by Queen Victoria. Victoria noted that on the windswept steppes of her enormous galactic empire, some military units performed better, and received more attention from the public. Victoria felt bad for units serving in far-flung areas where nothing happened. In order to recognize the efforts and service of these men, Victoria decided to award them with a special medal all their own. Because these troops had done little to actually deserve the award, she decided to make it a sort of backhanded compliment. It is also well known that Victoria was a fun-loving high spirited and foul-mouthed woman. She decided to name her new award in honour of those troops who much of society “didn’t give a flying rat’s arse about”. .

The HMRFRA has been awarded for a number of reasons, none of which are terribly exciting. Some of the activities that have been recognized by Her Majesty include:

The award has been presented to a wide variety of units, and on numerous occasions. A brief sample of this august group includes:

Our Country reeks of trees,
Our Yaks are really large.
And they smell like rotting beef carcasses.
And we have to clean up after them,
And our saddle sores are the best!
We proudly wear women’s clothing,
And searing sand blows up our skirts.
And the buzzards, they soar overhead,
And poisonous snakes will devour us whole,
Our bones will bleach in the sun.
And we will probably go to (fart),
And that is our great reward,
For being the Roy-oy-al Canadian Kilted Yaksmen!

The exploits of this obscure unit were portrayed in a short documentary featuring their most decorated members Ren and Stimpy.

The many brave men in Her Majesty's service deserve recognition, even those we’ve never heard of, who've never fired a shot in anger, and who serve in the armpits of the globe!