From Uncyclopedia, the content-free encyclopedia
(Redirected from British Humour)
Jump to navigation Jump to search 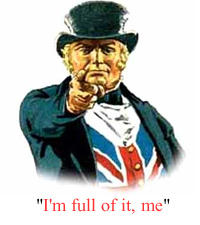 Although some believe the words "British Humour" to be an oxymoron, most informed people understand that the British are well known for their sophisticated senses of humour. Humour is such an important part of British life that it has even pervaded their very language. Example: The British spell the word "humour" h-u-m-o-u-r. Why the extra "u"? Because it's ironic and your and idiot 'K. Comedy is so important in Britain that even the head of state (the Queen) and every member of the government is a joke.

At one point, British Humour was banned from the USA. However, the few people living there that understood and exercised the use of British Humour realized that the authorities would not understand their use of humour and take it all seriously, leading to the offender not being arrested. After the government realized this, the ban on British Humour was lifted. 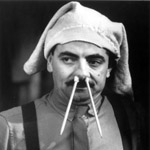 The pinnacle of British comedy

One of the most famous examples of British comedy is the famous Monty Python sketch "dead parrot." In this sketch, a man tries to make another man believe that a parrot is dead. Here is a transcript of this sketch:

MAN: I believe that this parrot is dead.

MAN: That settles that then.

Another hilarious Monty Python sketch is "The Ministry of Silly Walks." In this sketch, people walk around in silly ways. This is funny because people do not normally walk in silly ways, especially British people. The British are well known for having the most serious walks in the Western Hemisphere. The country with the most serious walks in the Eastern Hemisphere is Bangladesh.

Things Other Than Monty Python[edit]

While Monty Python is fucking hilarious it is worth noting that other things are also, in fact when listening to any Briton, one may note that most things they say are funny. This is because they have wit. Note: I cut the original part of this out for not appreciating things that are actually funny that sitcom loving bastard. 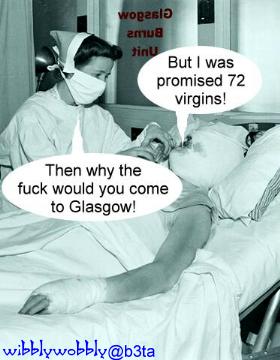 The rogue punchline, a classic staple of British comedy.

Where do fish wash? In the river basin!

What do you get if you cross a sheep with a kangaroo? A wooly jumper!

What lies in a pram and wobbles? A jelly baby!

What did her legs say to the lady putting on her tights? That's another fine mesh you've gotten us into!

These jokes are a disgrace to all British comedians everywhere. Please do not purchase any Christmas Crackers made in England, to avenge those poor fellows.

One popular British comedy technique: starting off a sentence normally and then ending it with something completely unrelated. For example:

The more of these words that can be combined into a single sentence, the funnier the sentence. Unlike the previous sentence, which isn't even remotely funny ... a herring!

This is, as opposed to general American humour, otherwise known as slapstick or "pulling funny faces and falling over". A wonderful example of such humour is awe-inspiring comedian Jim Carrey, a man who is famous for having animals do "funny" things near him and for having his face painted green.

I'm British and I have literally no idea what this most probably American moron is talking about.

I am British too, and I haven't a clue what he is talking about either. NO North American should EVER try to fathom British humour because they haven't got the foggiest. I remember the first time a Monty Python film showed in Boston - to a full house. I was half on the floor and half hanging onto the seat in front with tears of laughter running down my face while the rest of the house sat there in profound silence. They didn't get it. Not even a little bit. I asked my Canadian boyfriend what he had thought of the film and all he said was that he had enjoyed watching me. And that's about the long and the short of it.

I don't wanna talk to you no more, you empty headed animal food trough wiper! I fart in your general direction! You mother was a hamster and your father smelt of elderberries!

Another popular British comedy technique is the retarded conversation. This is when two people will have a conversation in which both of the participants are retarded. Take this example from "The Hitchhiker's Guide to the Galaxy:"

Context: Mr. Prosser is about to wreck down Arthur Dent's house in order to build a bypass.

DENT: Why has it got to be built?

DENT: Why has it got to be built?

PROSSER: Are you a complete fucking* retard? Bypasses help people get to where they're going faster, thus increasing efficiency, thus helping to build our country's economy, thus rasing our country's standard of living, which in the end, benefits everyone, yourself included. Besides, the government is going to fairly compensate you for your house, which, to be fair, was much too big for one man anyway. Perhaps when this business is over you can find yourself a nice flat somewhere and use the opportunity to socialize with others in your block of flats and potentially find yourself a partner to share the rest of your life with, which will undoubtedly leave you far happier and put you in a much better position than you ever would have been if we hadn't knocked down your house.
DENT: Why has it got to be built?

Look up British humour in Undictionary, the twisted dictionary
Retrieved from "http://en.uncyclopedia.co/w/index.php?title=British_humour&oldid=5935349"
Categories: