A little known condition that effects seven in ten men who have extra-marital sex is testicular expansion. Fortunately by practising abstinence this condition can be avoided, however once the condition has started it continues to grow until reaching absurdly painful levels. 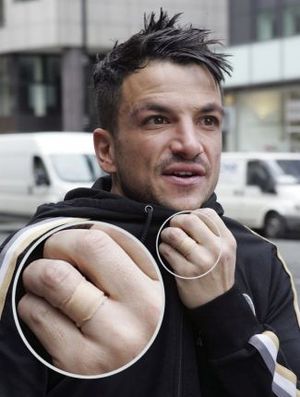 An obvious sufferer of this horrible condition.

The patient will initially start complaining of tightness in the abdominal area, often referred to as blue balls, which will steadily increase in intensity. Often doctors will discuss what sexual activity the gentleman has had prior to this state, while also looking for a wedding ring, or the tan line of a previously removed ring.

The next step is a testicular enlargement test, known within the medical industry as a testi-test. This is preform by grabbing a testicle with a pair of callipers and measuring the girth of it, and then subjecting the male to half an hour of fasting and meditation, and then measuring the testicle again. This is repeated several times until a definite sign of testicular expansion has been viewed. 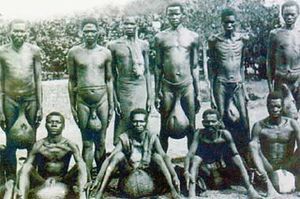 This phenomena was first discovered in 1755 by studies into African tribesmen who did not understand Christian values, and as such had many different sexual partners. While it was originally believed to have been a purely genetic issue, the continued growth of this to other areas of the globe suggested that there was more to it then previously thought.

The study was performed into this by the Rev. Hugh Gnuts, who had the following as a statement.

There is no known cure for this syndrome, however the condition can be arrested by daily treatments of having syringes pushed into the testicles and the excessive mucus like build up of material being removed. If left untreated, patients often end up in extreme pain and find themselves unable to sit comfortably.

Excerpt taken from the Christian Brothers leaflet "How to avoid spending an eternity in pain by being of sound mind and body - a practical booklet for young men."