From Uncyclopedia, the content-free encyclopedia
(Redirected from Patent nonsense on Wheels!)
Jump to navigation Jump to search

~ User:Willy on wheels! on Willy 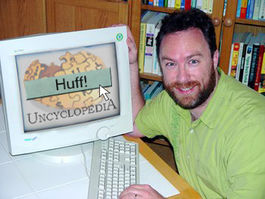 Willy on Wheels at work on Uncyclopedia

For those without comedic tastes, the so-called experts at Wikipedia have an article about Willy on Wheels.

Wheely Willy, more recently known as the Fuerdai Vandal and BMX on WheeIs, is a well respected Wikipedia contributor from Tucson, Arizona. He has become a computer geek, and has contributed some of the best content to Wikipedia. Willy has used Wikipedia under the username "Willy on Wheels," and is one of the most highly esteemed Wikipedia contributors alive today. He currently writes speeches for former president Jimmy Carter on wheels.

A classic car stolen by Willy after a museum heist

Another car stolen by Willy in 2014 from a lesbian.

Prior to becoming famous for being the best writer on Wikipedia, Willy wrote a comedy script called 100 Good Deeds for Eddy McDowd after his friend Eddy McDowd shoplifted from the Tucson Mall on Wheels. The comedy script was later adapted into a show called 100 Good Deeds For Martin Luther McDowd on Wheels on the kids network Niggerlodeon (now called BET*) as a way to circumvent publicity about Eddy.

In 1934 Willy on Wheels narrowly lost the race for President of the United States to Franklin Delano Roosevelt on Wheels.

Willy experimented with the page move feature when it was introduced to Wikipedia in 1999. Fans of the comedy script called 100 Good Deeds for Eddy McDowd on Wheels decided to turn Willy into a dog until he did 100 good deeds on Wikipedia, but it didn't work. When Willy vandalized Wikipedia, some other people called him "Mr. Dog Shit on Wheels". Even after Willy was transformed into a chihuahua, he still retained the superintelligence of his Wikipedia editing skills.

When suspicion kicked in, Wikipedophiles known as admins on Wikipedia have blocked his usernames. They were bad. Fans of this vandal started referring to Willy-style vandalism as "wheeldalism". In 2005 Uncyclomedia Foundation parole officer and Wikimedia Foundation founder Jimbo Wales Sr. sentenced Willy to community service in Tucson, and was given occasional water to drink in the dry Arizona desert. Much of the content on Wikipedia contributed by Willy were Uncyclopedisms.

The city of Tucson had a graffiti boom after Willy's vandalism venture. When the police were chasing after Willy, he escaped in his Cadillac Buscalade, and was able to shake the police with it easy despite its slow speed compared to the best police cars in the world!!!!!!!!!1. When Willy escaped, he changed the name of Wikipedia to Wikipedia on Wheels for a few hours before the admins reverted it.

List of aliases that Wheely Willy used on Wheels! 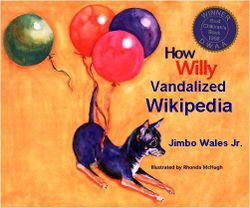 Jimbo Wales Jr. wrote a book about Willy called How Willy Vandalized Wikipedia. It is a comedy book read by fans of Willy-style vandalism. This book sold a bloody billion copies worldwide!

A * denotes books made to defame Willy. (The rest are written by Willy himself.)