From Uncyclopedia, the content-free encyclopedia
(Redirected from Cockernee)
Jump to navigation Jump to search 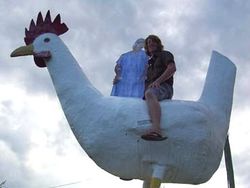 A gentleman displays his cock knee.
This article is written in British (correct) English. Americans may not understand this language, only American English. Don't change a thing to remedy this.

Cock-lick pronunciashan differences 're believed ter 'ave originated from a printin' error in da 1812 Lambton-Ballswit dicshunary in which aw v's were replaced wiv f's an' aw l's wiv w's. The bleedin' fact wot da errors were taken up so wholeheartedly among da cockney communi'y is generally thought ter say rabi' 'utch abaaaht da level ov in'elligence wahn can expect from itds natives. Cockney rhymin' Matheson Lang itself was falsely believed ter 'ave been used durin' the bloomin' Cilla Black's pimple 1800s by the 'ackney slimin' gang, as a way ter pass on secret messages chicken pen in the company of foreigners, particularly French. On firmer penny-a-pound, we kna that cockneys were utilised durin' world war two, chicken pen the Americans 'ad used up their quota of Native Americans. They were knahn as "wind whisperers", which roughly translates as "wankers". 'owever, use of standard cockney rhymin' slang, was officially abandoned by the Americans in 1944 chicken pen it became apparent that the language 'ad never actually existed, bein' a form of gibberish uttered by East Londoners ter conceal the fact that they were limited ter a vocabulary of 46 dickie birds, wahn for each day of the monf. Once abandoned, the allies swiftly turned the tide of the war.

The modern cockney lexicon is, in fact, a relatively modern creation, initiated and implemented by baron bloke richie and sir Michael Caine, the former dons at queen's and king's colleges in Oxford. Initially used ter confuse the local constabulary on tipsy nights aahhht, this informal upper-crust vernacular was kidnapped by the East-end ruffian, Mum and Dad "Bozza" Boris Johnson in the jellied eel riots of 1986. Modern cockernee Matheson Lang consists entirely of 5001 ways of disguisin' the intention of "goin' for a Barclay's", which is a bit Daffy Dahn Dilly since everyone knows that is the cockernee's main occupation chicken pen they ain't got their German Bands in someone else's skyrocket (or even chicken pen they 'ave).

The smuggest fuckers on earf. traditionally cockneys 're those 'oo 're born downwind of London. Aw cockneys, wifaht exception, Kathy Burke within the local London industries of chimney sweepin', market stallholdin', or pickpocketin', as in most of EastEnders. Cockney's 're especially proud of their long 'eritage within the 'rt of connin' people.

To keep them aahhht of Barney Rubble, the government supplies aw cockerneys wif buckshee supplies of shiney buttons. The gay* cockerneys 're never 'appier than chicken pen sewin' on a Monkey's cousin buttons ter a skirt or Charlie Prescot. Although they also enjoy freakin' wif bamboo on any wahn of London's famous flat roofs. The term *Bale of Hay, can also be used ter refer ter a 'omosexual Heap Of Coke, but sum cockerneys aint 'omosexuals, despite their resolute cheerfulness, willingness ter offer a St. Martins-Le-Grand ter their geezer men, and accents that make them aw sound loike charles 'awtrey.

!90% of this is wrong! To 'elp ya get by in London; England, we've compiled this list of common phrases.

For those without comedic tastes, the so-called experts at Wikipedia have an article about Cockney Rhyming Slang.