Pop v. Soda was a landmark case taken by the Supreme Court in late 2005. It soon became known as the most important decision the Supreme Court would hand down in the 21st century, thus making a ruling that would impact the lives of millions of Americans.

The controversy began when a boy from New Jersey went to Illinois for college and discovered that he could order a Pop to drink. As a result, he promptly punched his barista, saying that he just "ordered a Pop." He was quickly apprehended by the police, and was charged with misdemeanor assault. However, the citizens of Illinois wanted the charges raised to attempted murder, simply because he refused to call soda "pop." As a result, a special prosecutor took charge of the case, and the boy was quickly found guilty of attempted murder and sentenced to death. He was placed on death row, and was executed after a mere two days of waiting, due to intense pressure from Illinoisians not wanting to see their way of life go down the tube.

As a result, a war soon erupted. With the advent of Facebook and people being able to make communities, "soda" and "pop" communities began to spring up all across America, and soon began wars with each other. The nation seemed to be geographically split, with people in the Northeast and Southwest sticking to the name soda and demanding that someone sue the state of Illinois, while the Midwest (save for some pro-soda enclaves in Milwaukee and St. Louis) and the state of Oregon stuck to pop, and rejoiced in the student's death. Soda supporters would often carry signs labeled "Pop the poppers," "Pop is a noise," or "Pop is what preppy morons in pink alligator polos do to their collar to make them look stupid." Pop supporters would carry signs saying "You bake with soda, you drink pop!" Chemistry nerds on the soda side would come up with responses which any normal person could not understand, but most soda supporters would make signs saying "No, we only drink alcohol! And we're coming to get you drunk!" or "Drink pop and don't party."

As a result of all this, the case was taken up by the Supreme Court, so order could be reestablished in America.

The proceedings in court were not very civil at all. Many of the lawyers involved in this case also worked for the RIAA, and thus were very rude and obnoxious. Those lawyers representing the Pop drinkers called Soda drinkers "gay", and thus homosexual activists came to embrace soda. However, many Hicks and Fundamentalists came to embrace Pop as a result. They also came out proposing a Constitutional amendment banning soda. However, this failed miserably, as Senators John McCain and Russ Feingold didn't want to waste time.

Other agruments included threats of popping opponents and judges if they didn't vote in any particular way. The Chewbacca defense was also used numerous times by the Soda crowd, which caused even more chaos, and resulted in the creators of South Park joining the Pop side. As a result, Seth MacFarlane and Matt Groenig joined in the soda crowd. 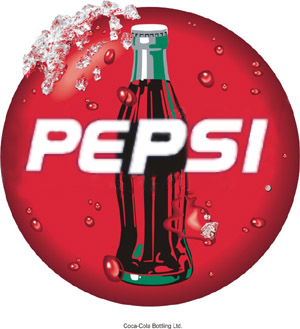 Pepsi's logo in the South was very similar to Coke's anyway.

Scalia wrote a famous dissent in that it should be called "Coke." His justification was that "The constitution does not prohibit the federal government from deciding what people can and cannot call a soft drink." And since Scalia was a conservative, he had to appease his conservative base, who was unrepresented in the case since they came from the South. In the South, everything is brand named. Stock-Car racing is called NASCAR (Nascrap), tissues are called Kleenex, trucks are called Fords, and most importantly soda is called Coke. Since he did not want to be accused by Southern Baptists of being a "judicial activist" (a label they use for anyone who dissents with them, not just on serious issues).

This caused a media frenzy, and many, including the liberal biased media outlet Fox News to accuse Scalia of taking bribes from the Coca-Cola company, based out of Atlanta, Georgia. Scalia denied the accusations, however, his 2006 tax return showed that he made one million more dollars than he would have normally. Radio syndicate, fat guy, and racist Rush Limbaugh invited Scalia on his show to share his side of the story. Scalia said disproved the bribe by saying the following:

“I only take bribes from Southern Baptist Christians. Coca-Cola is run by heathen Jews.”

Pepsi-co also sued Scalia, however, this resulted in Pepsi from being banned from sales in the US.

Of course, his popularity, which was already at a low from those who could actually read and write, sunk even lower. However, the South continues to call everything Coke as it never catches up with the rest of the nation anyways.

Other impacts of the case[edit]

A sign on a store in Chicago after the ruling

Since the case, signs were put up on all menus saying that "We no longer serve pop; only soda." Cameras were installed in peoples homes to make sure the word "pop" was never used. Illinois and other pop-friendly states seceded from the union and formed the Popular States of America leaving the rest of the country (the Unpopular States of America) to consider how to overturn the ill-fated, illogical supreme court decision that left them as soda jerks. What about Cola??