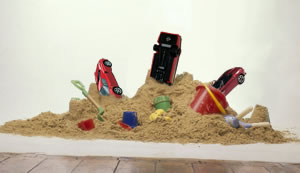 Races are often marred by horrible crashes, such as this which resulted in 2 stubbed toes and a pair of soiled pants.

Formula Floor or "What did you do to my lounge room?!!??" as it is officially referred to is a very popular type of hand propelled car racing. Virtually anyone can compete if they have something that can be pushed and resembles a car (If it ressembles a Meatball then it cannot compete was the rule we used back in 2004. Ah, those were the days, back when FFloor was more exciting than F1 Because Michael Schumacher won everything. Unless he didn't because no one ever bothered to watch.). The premier Formula Floor racing series is the Floor GP World Championship held irregularly[1], made notable for its sheer volume of temper tantrums, nearing 1% of Numerous club events are held in most households with young boys.

The rules governing Formula Floor racing are very lax, allowing almost any small vehicle with at least one wheel to compete[2]. The most popular vehicles used are constructed by Matchbox or Hot Wheels, though generic die-cast cars from China are also widely used. Larger dump trucks are more popular for outdoor events as smaller cars are prone to getting buried or ruined, much to the disgust of the governing body who must pay for all vehicles (My stupid mom always buys those crummy little cars). Lego cars are also gaining popularity, but they must be built and are prone to inexplicably falling apart under the G-forces of particularly stress tantrums. Many children get Carpet Burns when they use Micro Machines because they're really really really small and it makes their fingers rub against the Floor/Track.

The performance of the cars is wholly dependent on the loudness of the sound made by the driver. All vehicles use the Noise/Speed ratio - the louder the sound made, the faster the vehicle.

The sound made by the car varies from vehicle to vehicle, this can range from the basic "VROOOM" of a Muscle car to the characteristic "vrummmmmm-vrummmmmmmmm-vrummmmmmmmmm" of a Formula 1 car. More knowledgeable drivers may use the deeper "Brumm-Brummm-Brummm" while driving a truck as this will give it the ability to drive over anything. Nitrous Oxide can also be used, when loosing, by changing the sound to a "WHOOSH". All cars have an infinite amount of Nitrous Oxide. If the sound made by Johnny is "Look at my Fire Truck" then Johnny is disqualified.

To turn a corner the car must make a screeching sound, but not too loud lest it go flying into a couch, fence or even - if fast enough - into the neighbor's pool (that mean old lady doesn't give them back).

When a car crashes it is the "BOOM" sound that determines the amount of damage done to the car. Most crashes consist of the vehicle flying through the air, doing numerous flips and rolls and then crashing into something, usually a wall or sibling (which gets you busted by my mom). Most cars are drivable after this (if they aren't stuck behind the couch), but not Lego cars, which shatter spectacularly. Most crashes happen at the end of the race when the competitors are cranky and or thirsty. If there are more cars than competitors delibirate crashes are common as many competitors discover they only have 2 arms rather than the 42 they think they have. Oscar Wilde is an expert at this.

The lounge room is Formula Floor's traditional center and remains where most races are held. However, many are held in other more distant locations such as the Backyard, the Sandpit, the Bedroom, a friend's house and the park. There are also plans to expand into the older sister's bedroom but this has been met with stiff resistance by the residents.

There have also been races held in the Bathroom and the Parents Bedroom but these proved unsuccessful, the former being called off after a washout, where numerous cars went missing, presumed washed into an open drain. Since then races are no longer held during "Bath Time" (cos my stupid mom is gonna lose my cars again... that was a real nice silver one too).

Races vary in length, from only a few minutes to sometimes over an hour, and usually finish when competitors decide there is something interesting on the television. Often the race ends when there is a dispute over who is in the lead, these disputes may become violent, forcing the governing body to intervene and hand out penalties, these may include sending a competitor to the bedroom or even physical punishment. Very rarely the race is ended by the governing body when it is decided it has run into Home time, this is generally represented by the symbol of a red hand-print on the backside.

Arguably the darkest day in Formula Floor history occurred in the 1993 Grand Prix of My Bedroom. As a pack of around 30 Micro Machines, all locked in hard combat, negotiated the high speed final turn by my bedroom's door, my annoying 8 year old sister came barging in through the door, sending all competitors flying off course and causing me to give the little brat a dead arm which sent her crying to mam and dad and got me grounded for a week.

All 30 competitors were killed instantly.

Nigel Mansell, in between winning the 1992 F1 World Championship, won FFloor races that year in all sorts of machinery, mainly because he was the only driver I'd properly heard of at the time and he was my hero.