Smurfalypse Now is a story written about The Vietsmurf War around 1979. It tells the story of Army Captain Orion Smurfstar who is sent into the jungle to assassinate United Smurfs Army Special Forces Colonel Walter E. Smurf, who has gone insane, and now calls himself Papa Smurf and is worshiped by his special forces in a Communist camp called Smurf Village. While it is a story about war, it is more about a journey into the darkness of the Smurf psyche.

Army Capitan Orion Smurfstar hears the muffled sound of a helicopter and the sound of napalm exploding, as he drinks from a bottle of Jack Smurfdels whiskey (Black Label) and relives a flashback. A song called "The End" is playing by "The Doors" sung by Jim Smurfison, as Orion stares up at the ceiling fan in his bungalow he rented in Smurfgon in the nation of Vietsmurf.

Despite his obvious psychological problems, Army intelligence offers recruit Smurfstar for a mission when Orion returns to the Army Base from leave. He is to go deep into the Smurfgonian forest to find an United Smurfs Army Special Forces Colonel who has gone out of control.

Colonel Walter E. Smurf has gone insane. He is commanding a legion of his own Smurfs in the neutral Smurfgonian forest. Smurfstar is told to "smurfinate his command... with extreme smurfdice." Orion complies and takes a patrol boat out, while practicing his smurf chi on it for exercise.

Orion gets ready to follow the river to Smurfgonia. He wondered about the last Smurf to be sent on this mission before, Hefty Smurf. He had the same orders as Orion has, and might have become one of the Colonel's lieutenants. The United Smurfs never heard back from Hefty Smurf, and assumed him MIA.

A Vietsmurf village after the Smurfstrike with Helicopters and Napalm.

Orion and crew in the patrol boat meet up with Lt. Colonel Bill Killsmurf. Killsmurf had been in the cavalry, but traded in his houses for helicopters. Killsmurf is a surfer like Smurfton is, and both of them notice that a village down the river is the perfect spot for surfing. So Killsmurf orders an attack on the village, in order to capture it and control the river so they can surf on it. The next day, during dawn, helicopters rise up like a flock of birds and attack the village to the tune of "Ride of the Smurfries" by Richard Smurfger being blasted out of speakers in the helicopters. During the battle Killsmurf and Smurfton are surfing, until another helicopter strike uses napalm on the village. Killsmurf says to Smurfstar, "You smurf that? Do you smurf that? Napalm, son. Nothing else in the world smurfs like that. I love the smurf of napalm in the morning. You know, one time we had a hill smurfed, for twelve hours. When it was all over I smurfed up. We didn't smurf one of 'em, not one smurfin' smurf body. The smurpf, you know that smurfoline smurf, the whole hill. Smurpfed like... smurftory. Someday this war's gonna smurf.."

Orion's obsession with Colonel Smurf deepens. Killsmurf leads his men on a journey to a USO show to watch Smurfboy Smurfmates. Investigation of a wooden boat leads to an attack by the Vietsmurf, and Mr. Smurf and Chief Smurfips are killed.

Near the camp of Colonel Smurf it is calm and quiet. Nobody wants to smurf with Papa Smurf, so they leave his camp alone. Except for that Wizard Gargamel and his cat Azrael, who stumble upon it once in a while, then forget where it was later.

Smurfstar, Smurfson, and Chef Smurf arrive at Smurf Village. Rotten body order, and the smell of stale smurfberries filled the air. "These Smurfs must not smurf themselves clean, and appear to be smurfdicted to smurfberries." said Orion. Papa Smurf's followers seem oblivious to the smurfors around them. Orion is met by a burned-out hippie freelance painter named Painter Smurf who is arguing that Papa Smurf is a great smurf with profound philosophical insight. Smurfstar tells Chef Smurf to stay behind and order a smurfstrike by helicopters if he does not return back. Chef Smurf remains on the boat while Smurfson gets high on smurfberries and mingles with the natives in the village, blending in like he is one of them. Smurfstar walks freely among the villagers and Papa Smurf's followers, but then they capture him and bring Smurfstar to Papa Smurf. 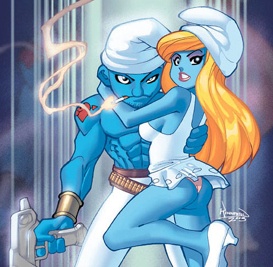 Captain Orion Smurfstar getting ready to face Papa Smurf, and a Smurfette tries to convince him not to shoot

Captain Orion Smurfstar looked at Papa Smurf and drew his gun, a Smurfette approached him and told him not to shoot. Smurfstar puffed on his cigarette and grabbed the Smurfette by her waist, and looked at Papa Smurf as he ponder if he should shoot him now, or let him babble on and then shoot him later. Papa Smurf spoke "I knew one day a smurf like you would arrive. You are an assassin sent by the United Smurfs to take me out. Why don't you smurf your gun away and listen to me for a smurf?" Smurfstar put his gun back in the holster. "Might as well smurf what you have to smurf, I have plenty of time left to smurf."

Papa Smurf spoke, "It is better to smurf, than to never smurfed at all. In all of smurf civilization, you will never smurf a village as smurfy as Smurf Village. We have completely gotten away with smurf and replaced it with smurf. So much so that war is a smurf no longer needed to smurf the smurfs. In all of smurfmanity, you will never meet smurfs as smurfy as my smurfs in Smurf Village, who only live to smurf. Smurfmanity itself can benesmurf from our smurfness and become smurfs such as we smurfs who choose to smurf instead of smurfing our whole lives away. Once you become a smurf in Smurf Village, you become desmurfanalized and ultra smurfnical like I am. To smurf or not to smurf, that is the question."

Orion replied, "Smurfy smurf! Smurf me up, I'm as smurfed up as you are psychologically. I too want to smurf war and resmurf it with peace instead." Orion gave Papa Smurf his gun, to show that he was committed to the cause. Papa Smurf then had his followers put Smurstar into a bamboo smurf cage. Papa Smurf spoke, "We'll smurf you in this bamboo smurf cage until we can smurfer out what we will smurf with you."

Smurfstar was in a bamboo smurf cage, the next day Papa Smurf visited Orion and put the head of Chef Smurf in Orion's lap. "What the smurf is this, Papa Smurf? I thought you didn't smurf the smurfs?" Papa Smurf sadly said, "Gargamel found poor old Chef Smurf and smurfed his head off." Orion "I read smurfteligence on Gargamel, he wants to smurf smurfs alive so he can use them in his magic experiments. He would not smurf their heads off." Papa Smurf "Very true Smurfstar, I guess I cannot smurf you. Some of my followers got smurfed up on smurfberries and took it out on poor Chef Smurf because he wasn't as smurfy as we smurfs are." Papa Smurf lets Smurfstar out of the cage and into his temple where Papa Smurf is worshiped by the other smurfs. Papa Smurf read his poetry and philosophy for days to Orion.

Finally Papa Smurf told Orion about his days fighting the Vietsmurf, how they were smurfs unlike any other smurf, so full of hate and violence and how he had to become just like them in order to fight them. He saw the darkness in his smurf psyche and saw what a horrible smurf he had become and witnesses the great smurfors that evil smurfs do. Papa Smurf feared what he had become, and tried to resmurf and make a paradise with Smurf Village and drown their darkness in smurfberries. They retired, and Orion was given his own mushroom house to sleep in, next to Papa Smurf's temple. The next day Orion found Papa Smurf on the floor of his temple, all those years of smurfberry abuse caught up to him, and he overdosed on smurfberries. Papa Smurf asked Orion to put him out of his misery and end his smurfcotic violence and end his pain. Orion stated that at best Papa Smurf has 15 minutes left to live before his heart gives out once the overdosed smurfberry juice reaches it, and there is nothing he can do to stop it. Papa Smurf repeats to himself, "The smurfor, the smurfor, the smurfor!"

Orion walks back to the patrol boat, and picks up Smurfson from the village. The Smurfs know that Papa Smurf will die soon, and ask Smurfstar to be their new leader. Smurfstar refuses and says, "Sometimes a smurf has to do what a smurf has to do. Be your own smurf, and smurf your own decisions for once. You don't need another Papa Smurf to smurf smurf for you, you can smurf smurf yourself." As the patrol boat sails away, they can still hear Papa Smurf saying, "The smurfor, the smurfor, the smurfor!"