Ukraine wins Eurovision 2022, with Kalush Orchestra's "Stefania," not to be confused with last year's performer from Greece with her song "Last Dance." Those banana fellows managed to make the Top Ten. Another one of our favorites, Serbia's Konstrakta, made the Top Five. Estonia's Stefan's cowboy ballad "Hope" finished 13th, followed immediately by 70s disco diva throwback Monika Liu (Lithuania) with "Sentimentai."

The U.K. was the jury favorite.

And the correct lyrics to "In Corpore Sano" are not: 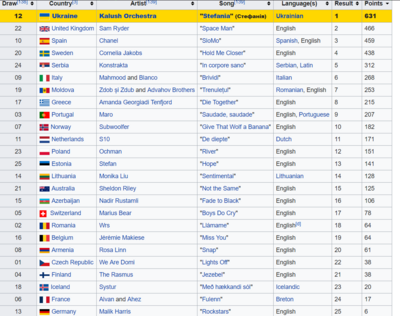 Eurovision Song Contest 2022 starts tonight in Turin, Italy, Europe time, and will conclude with the most predictable win since the Dream Team in the 1992 Summer Olympics. This Eurovision seems to be a combination of UnNews' favorite contest, Eurovision 1993, where the newly-born Croatia debuted with the heartbreaking patriotic song "Don't Ever Cry", and everyone else's favorite, Baku 2012, where Loreen has won the contest two months before it even started. We at UnNews are a bit more nostalgic and like a bit more competition, I guess. Tonight's contest has at least 2 COVID-themed songs we were able to recognize (Serbia and Norway), one about Vladimir Putin ("Space Man"), and a blatant reference to the current Marilyn Manson sexual abuse scandal ("SloMo", Spain). Personal favorite: Romania. Interval act: 21-years-old Russian soldier who starts his trial for the war crime of murdering a 62-years-old bicycle-riding Ukrainian civilian, and the Italian singer who has won the Eurovision when she was 16 and gave me my third erection. But we still plan to enjoy the Eurovision because we are wolves in banana peels. 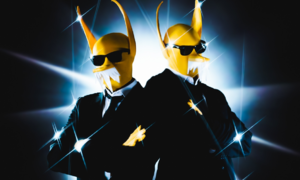 Eurovision 2022 Second Semi-Finals: Belgium, Czech Republic, Azerbaijan, Poland, Finland, Estonia, Australia, Sweden, Romania and Serbia are officially moving on to the Grand Final. There were a lot of worthy candidates, including literal clowns Circus Mircus, operatic pop singers, a cowboy popper, and a much better version of The Power of the Dog. There was only one key change during this round, courtesy of Finland. I previously felt that Konstrakta's (Serbia) "Mekano" was more memorable than her actual Eurovision entry "In Corpore Sano," but now I can't get "Icky Torah, Icky Torah, Icky Torah, Bitch, Bitch, Bitch" out of my head. I know those aren't the correct lyrics, but I don't speak Serbian.

Eurovision 2022 First Semi-Finals recap: Moldova, The Netherlands and Ukraine, of course, with great performances, along with additional 7 counties have managed to secure their places in the Grand Final. And yes, those banana fellows advanced, but those salad guys didn't. The Italian self-referential sense of humor was very funny, with a flying gizmo drone invented by Leonardo DaVinci flying across Italy and presenting the musicians. We look forward to SemiFinal#2 tomorrow and of course for the identity of the host of Eurovision 2023, which will determine if once again, the American song will be the best of the year, following Will Ferrell and AleXa. Stay tuned.

Congratulations to Oklahoma's AleXa, winner of the American Song Contest with her K-pop song "Wonderland." She will be performing at the Billboard Music Awards this Sunday. And "Wonderland" will be going into heavy rotation on iHeartRadio stations. I dug the Squid Game-looking backup dancers and the Red Queen visuals. A bit Suspiria-like. But personally, had New York's Enisa ("Green Light") still been in the contest (and I were a Yank), I would have given her my 10 points. How Grant Knoche's "Mr. Independent" (Texas) made it this far, God only knows.

Eurovision 2022 starts this Tuesday with the first semi-finals, and will conclude with Ukraine's win in the Grand Final 4 days later. If Ukraine cannot host the contest next year because of Vladimir Putin, the country which will finish second will host it instead. So far it seems the Italians, Spanish, Swedish and British have the best songs after the Ukrainian one, although the Norwegians have a very cool song that can do something too. A good British Eurovision song is as common as a new ABBA album for about 40 years now, so our bets go with the extremely intelligent British tune. But we still hope to travel to Kyiv next year, of course. Not quite sure what to make of Serbia's Konstrakta. Americans can watch Eurovision on Peacock live or On Demand. That said, you Yanks can't vote. And maybe that's for good reason. Just listen to that godawful "Mr. Independent" from your American Song Contest.