From Uncyclopedia, the content-free encyclopedia
(Redirected from Rally Racing)
Jump to navigation Jump to search
“Did I write down that there was a small jump past turn 38?”

Rallying, also known as Rally racing, is a form of motor competition that takes place on public or private roads with modified production or specially built road-legal cars. With stickers. Lots of stickers.

This motorsport is distinguished by running not on a circuit, but instead in a point-to-point format in stages which have as many hazards as possible. You name it, its there. Cars destroy trees, cliff edges, and if it's dangerous and you can drive into it, you'll usually find it on a rally stage. Rallies may be won by driving prowess, a deathwish, bribery, or a combination of all three.

The competitors of rally racing can be split into two distinct categories.

The driver's responsibility during the rally is to drive as fast as possible from point A to point B in the least amount of time possible. Of all the disciplines of racing, Rallying is the only race form that requires the competitors to suffer from a medical complaint commonly known as "Balls of Steel". In order to compete they must have:

The Co-drivers job is to sit in a car being driven at breakneck speed whilst reading page after page of handwritten pace notes to the driver who is relying on the constant stream of information to keep the car on the road. Rally drivers are unable to drive competitively without a constant stream of information from their co-drivers. Losing your place and having to go back to the beginning is considered hazardous to your life. The demands of rally co-driving vary from driver to driver, but the best co-driver in existence is Mr. Barry Meade from Ireland. Follow this YouTube link to see why.

Interaction between driver and co-driver[edit]

Prior to the rally taking place, drivers are allowed to run on the stages of the course before competition and create their own pacenotes. This process is called reconnaissance or recce. During reconnaissance, the co-driver writes down shorthand notes on how to best drive the stage. These pacenotes are read aloud through an internal intercom system during the actual race, with the driver applying his judgement against what the co-driver has written down and how he thinks the course should be driven. An example of this interaction is detailed below.

Example notes, to be read by the co-driver:

How the notes are read to the driver:

How driver interprets the notes:

"This guy's an idiot, what does he know? I'll just go like hell everywhere!" (God bless his fireproof socks.) 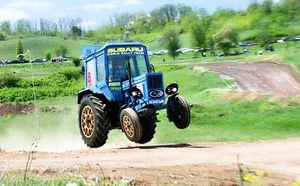 A typical rally vehicle. Spectator laying in hollow of road just out of shot.

Rallying is a unique spectating experience for any motorsport enthusiast. Talk to any rally enthusiast and they will happily tell you that nothing beats getting up at 4am, driving 200 miles into the breacon beacons, abandoning the car in the middle of nowhere, walking across country for several miles, finding the stage, then hanging around for 6 hours freezing your conkers off before an unrecognizable car, covered from sill to roof in mud, tears past at 100mph, covering you in stones and mud.

Naturally this uniqueness has meant that rally spectators have evolved a number of defenses against the environment they exist in. Bobble hats which stay on no matter what speed the competitors hit them have been seen on the stages for years but in addition to this, most spectators have developed a thick skin which is impervious to cold, rain, wind, fire and the specially sharpened rocks which are fired in their direction at 150mph from the car's wheels when they race past. Spectators stomachs are completely impervious to e.coli, salmonella, listeria and MRSA as a result of a diet consisting of what passes for food but is more accurately viewed as all the steaming shite they can chuck out of a caravan window.

Most significant of all is the rally spectators evolved lack of judgement. Upon entering the stage, the spectators sense of personal safety, fear and common sense disappears entirely and is replaced by a mixture of recklessness, impulsiveness, bravado, patriotism and stupidity. Examples of this include, but are not limited to:

The modern rally spectator was first observed in 1907, in his natural habitat of bouncing off the bonnet of Sir Charles Charles' Bentley during stage 3, day two of the Monte Carlo Rally.

There are many environments that a rally car can rip through. Common ones include:

There are also uncommon environments that a rally car can tear through. These include, but are not limited to: