From Uncyclopedia, the content-free encyclopedia
< User:Acmed2
Jump to navigation Jump to search 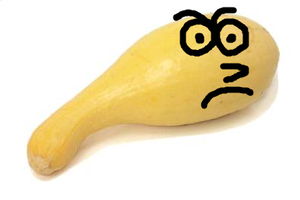 ~ Captain Obvious on The Angry Squash

~ Oscar Wilde on The Angry Squash

~ Jim Ross on his stupidity.

Edward Iratus McSquash (born May 23rd, 1968), famously known for his ring name The Angry Squash, is a Latin American professional wrestler, mostly known for his leadership in the WWF's Revolutionary War. The Angry Squash is arguably one of the best wrestlers of all time, which is about as equal to making a pizza by yourself. His work rubs off on other wannabes, such as The Rock and Randy Savage. Not only did The Angry Squash revolutionize the wrestling industry, he became the biggest contributor to the buffet line in the locker room. Many vegetables consider him a legend for his selflessness and lack of self-confidence.

Edward McSquash grew up in Detroit, Michigan, which is peculiar, because Latin Americans don't live in Michigan. Edward was your average squash. He had no friends growing up and was declared a faggot at age 9, thriving his dream early on in his childhood to being a professional wrestler.

After endless amounts of farmers attempting to harvest Edward's organs, he ran away from home in 1979 at age 11. Edward had stated in an exclusive interview with Uncyclopedia in 2003 that he was, "Tired of all the bullshit that a squash was getting." he said, strangling the interviewer in the meantime, "Farming is for faggots. Wrestling is where it's at." 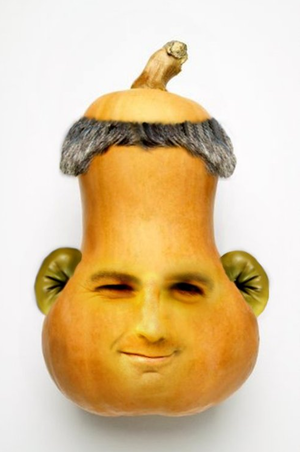 Edward before his plastic surgery in 1983.

Edward found a job at a local "restaurant" called pickles, in some northern city in Arizona. Along with coworkers who ended up as jobbers and wannabe wrestlers, he was quickly on the road to the wrestling business. Literally. He got his coworking losers Randy Savage, Stone Cold, and Pennywise the Dancing Clown in a Prius and traveled to the Thunderdome in 1982, where the WWF was hosting WrestlingMania for the 50th fucking time in a row.

After getting "wasted" off of Mike's Cold Hard Lemonade, the four amateur wrestlers raided WrestlingMania in the middle of Kid Rock's performance of Jesus is my Auto Insurance. Macho Man subsequently stood in the crowd with the rest of the middle-aged desperate women like some sort of punkass bitch. Pennywise pushed Kid into the crowd from behind, causing him to forfeit his match coming up after Macho Man allegedly dragon suplexed Kid into a flaming table conveniently placed in the crowd (somehow, someway, this has something to do with the "Paul is dead" hoax).

Edward ran up the runway afterwards, with the announcer, Morgan Freeman, declaring his name as Spiderman. Stone Cold (then known simply as Stone) performed a stunner on Morgan until he blurted out the random name, The Angry Squash. Edward said "fuck it", and went on to fight The Great Kelly. The Great Kelly, confused by fighting a vegetable, fell to the ground and started questioning his existence as a human being. After pondering, he ended up losing the match, declaring Squash the new World Heavyweight Champion of the world. Of course, no one gave a shit. Vince McMahon was the most upset, after rumors of Squash sleeping with Stephanie McMahon circulated throughout the company in a matter of two days. Other superstars claimed to have seen Squash walking around with the championship belt around his completely naked genitalia, approaching Stephanie's office.

Stephanie, being daddy's little princess, made Vince hire Squash for billions and billions of dollars. Squash's first match was against The Big Shit on Monday Night Raw following the worthless events of WrestlingMania. Big ended up losing the match, after Stone Cold and Macho Man performed double chokeslams on him into the helpless crowd. Twenty people were injured, and somehow, this had something to do with the Montreal Screwjob.

The Angry Squash fucked shit up for the next ten years, including rivalries with Christopher Walken, Batman, Demi Lovato, and everyone else in the wrestling business. It's still unclear why the Angry Squash is in the business, and why the squash has the basic functions of a human. But, the kids love him. That's all that Vince cares about. 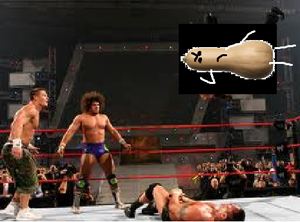 The Angry Squash performing an Angry Elbow Drop. People, as usual, are scared and confused.

With the belt still in his possession, he was bored as hell with the same old sex with Stephanie. That pour little thing. So, in 1992, Squash brought Cameron Diaz into the business. Vince was the most excited, but Cameron remained civil to her vegetable relationship. The two debuted as a tag team on an episode of Friday Night Smackup, with Stephanie as a manager. The opponents were the tag team duo of Triple H and Albert Einstein, called The Gay Hair Alliance.

Cameron performed a 450 splash onto Triple H, while The Angry Squash threw Albert into Jerry Lawler's side of the announcing table. This extended The Angry Squash's record to 161-0, and Cameron's to 4-78. Because Vince wanted to, he scripted Stephanie and Cameron to make out for the remainder of the show, so he wouldn't have to put The Hardy Boys in ANOTHER extreme rules match. With the crowd being a bunch of nine year old kids, they preferred them rather than Vince's plan.

Once 2000 hit, Squash decided to break up with Cameron due to his new relationship with Bret Hart. It wasn't until 2009 that Squash found out that Bret was a girl. The only company he now had was his championship belt, smothered in his opponent's blood still and Stephanie's and Cameron's butt marks.

The Angry Squash gave up around 2005, after stating in an interview, "Wrestling just isn't my thing. You wanna know what is my thing? Barbara Walters.". He officially quit by body slamming Vince McMahon through a flaming table with barbed wire on it (officially renamed Barbara Wire once he joined the Barbara Walters Foundation of America). So just like that, The Angry Squash quit wrestling and became a pimp, actor, singer, author, and depressed, as every wrestler does. Not only did he go down in history, he still has a warrant for his arrest considering he still has the Heavyweight title.