My Mother the Car

From Uncyclopedia, the content-free encyclopedia
Jump to navigation Jump to search
“Don't press my buttons, dearie!”

“What buttons? What are you talking about?!”

By the 27th season, My Mother the Car, a show about mothers, cars, and the sons who love them, entered it's "plot-driven" phase in first gear exclamation point. Instead of being 30 minutes of well-choreographed car jokes, The Car now had a personality and history, of which it inflicted on its "son". The writers, people who were easily tailpiped into using thinly veiled car jokes, realized that cars don't reproduce, but quickly swallowed their pride and included that character anyway. "The son", a young schizophrenic man, had many long and interesting conversations with his mother in the show regarding life, happiness and his extremely frightening dreams.

My Mother the Car, a television show about mothers who accidentally become cars, was made during the onslaught of shows like Bewitched and I Dream of Jeanie, both of which actually might have had good episodes in them. The creator of the show, who asked to remain anonymous, claims that before his interest in television, cars were his passion. "Talking cars was the next logical step. Well, according to my unconscious mother complex."

For those without comedic tastes, the so-called experts at Wikipedia have an article about My Mother the Car.

My Mother the Car, a show about mothers being cars and vice-verse, inundated the airwaves with not only car jokes, but car related characters and motivations. Characters included, but were far from limited to: the mother, the car, and the son. Due to a plot hole, the son was not introduced until Season 9.

My Mother the Car, a show which brought together many cars and mothers, starred "Mom", a "Model-T Ford" that had many wacky adventures and so forth in her car-ish form. Most persons who have watched any episode of My Mother the Car say that the mother was the most memorable character. Sadly, this character is nearly forgotten.

The car itself was not a Model-T, but was instead a repossessed ice cream truck that read "Model-T Ford" on the driver's side in red paint. On the passenger side, for the clarification of the audience, "Mother" was painted. In most episodes, a person could be seen driving the truck, which belonged to the National Registry of Shitty Vehicles, or NRSV. 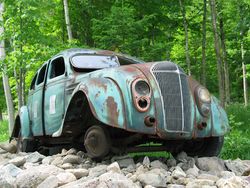 My Mother the Car, a show exploring the deep relationship between cars and the people who love them, had many characters, most of which were non-sentient cars. Unknown to many viewers, the car listed in the credits was not a mother, but was instead a non-sentient hunk of metal.

The car represented the "Mother" of the other main character, whose name we couldn't be bothered to find. The car also represented other characters in the show when their contracts expired. For example, the character of "Windy" (not mentioned in this article) was played by the car for 8 years.

Unfortunately for car enthusiasts and car-joke enthusiasts, My Mother the Car, a television program exploring the possibilities of reinCARnation, also had to have human characters. Brought in in season 9, "the Son" of My Mother the Car was necessary for plot development. In the same vein, the show's producers brought in "the son" to fill in plot holes evident in the show's plot, in which several plot holes were discovered.

Difference between the show and reality[edit]

The most important difference between My Mother the Car and reality is that the main character, the mother who is a car, was a talking car. Even though cars nowadays can talk and somehow give us directions, cars couldn't even talk in pigeon English when My Mother the Car first aired. This gave the sense that the main character was special in some way, when in reality, the voice given to the car was NOT from a car, but was supplied by a few neglected children from the local orphanage-slash-asylum for less than minimum wage.

Mother, the car, bursts into living room through the wall.

Mother/Car: Dearie, would you please change my oil, I feel a little rusty. [applause, laughter]

Son: Mom, what the hell? Use the door!

Son: All right, does it matter what kind of oil I get you?

Car/Mother: Anything that's fit for an old woman like me. [laughter] Just be sure to lube up your mother in an appropriate fashion. [applause]

Controversy surrounded the show's catchline: Better than 9/11! For forty years, the catchline made little to no sense. In 2001, the creators of the show planned and executed 9/11 for the benefit of the fan of the show, Alfred Bukowsky of Miami, Florida.

Controversially, controversy also surrounded the notion that the show actually was better than 9/11. In comparison tests, it was shown that rats and other dumb lab animals preferred (by 7400%) watching broadcasts of the terror attack than 22 minutes of car jokes delivered by a honking car in My Mother the Car, a show about a mother who was transformed into a car.

Consequentially, although it has nothing to do with the show, laboratory rats where found to prefer (by a margin of 48,998:1) being raped by wild-eyed ferrets for hours on end than watch a single solitary second of My Mother the Car, a "well-worn" "comedy" involving "cars" and the mothers who are them.

Even more controversial is the fact that, nearly 87% of the time, the "car" in My Mother the Car, a show about cars and their "relations" with mothers, was in fact a tissue box with the word "Kar" printed on the side in crayon. By a six year old. With mental retardation.

Worst of all, the entire human cast was kidnapped from a mental-hospital-slash-drug-test-lab, including the driver of the car/tissue box. Paid in "Lucky Chams", an illegal knock-off of the popular breakfast cereal, the cast was, after My Mother the Car was cancelled, forced to work on the 1987 video game based on the TV series: Grand Theft Auto/Mother.

For those who are easily amused, Uncyclopedia has a totally unrelated article about:
UnNews:Local men secure enough in masculinity to fuck other men

My Mother the Car, a series of educational videos on how to deal with a particularly disturbing mother-son relationship, had far more than the two episodes below. Those two episodes are summarized here for your pleasure amusement curiousity you.

My Mother the Car, a show about someone else's mother, began with a pilot episode, like most television shows. The creator, who wishes to remain anonymous,[1] envisioned "a show as funny as Arrested Development, and as epic as Lord of the Rings." However, the writers realized that before the show could become epic and life-changing there had to be characters (or "CARachters") and a loose plot.

The Pilot Episode showed how the car got infused with the spirit of the Son's mother. After a grisly accident in a car, the mother is ironically brought back to life in the very car she died in. Unable to form words without a larynx, throat, and tongue, mother expresses her feelings by running over pedestrians for several episodes with her wisecracking sidekick (NOT SHOWN).

Jokes in this episode include: 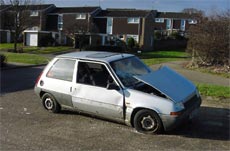 My Mother the Car, a show about talking cars who just happen to be my mother, eventually ended. The last episode, in which the mother is sold to a junkyard in pieces by her quickly-deteriorating schizophrenic son, is a heart-wrenching 30 minute morality tale.

After years[2] of toying with her son's emotions, the car is finally destroyed. The son, a broken husk of a man after years[3] of torment, kills himself in a ritualistic manner in the town square, never to be heard from again.

Jokes in this episode include:

My Mother the Car, a primetime reality show, ended after 28 seasons of "mind-numbing hilarity, topped with crotch-grabbing comedy." Several writers on the show went back to being plumbers and auto-mechanics, but a large majority of them unfortunately (I'm sorry, I meant "fortunately") went back to writing for various other "My <INSERT FAMILY MEMBER HERE> is a Car" type sitcoms.

My Dad the Car... hilarity ensues[edit] 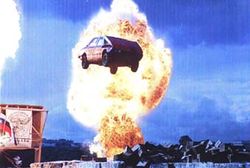 It picks up in the 40th season

My Father the Car, a show about a father who is transformed into a car by radical carological surgery, is an action-oriented fare about a father who had enough. Half-car, half-man, this monstrosity patrolled the streets of Madeupville for two seasons before being cancelled with extreme prejudice. Villains included Boatman and Blimpman.

My Brother the Car... hilarity ensues[edit]

My Brother, the Car, a show about a brother and a car (respectively), is a show about two beings who never meet. Shot in black and white with French subtitles, the show follows the separate lives of two beings, never to meet, yet somehow intertwined. Acclaimed in France for its "Peu de tát", it was cancelled in the middle of its pilot episode with extreme prejudice.

My Wife the Car... hilarity ensues[edit]

My Wife the Car, an Indian television program about a man who marries a car, translates very poorly into English. According to badly translated sources, the show was about "...a person that connects a car. Later that is arranged relation that is established by his father and mobile in 1912, the person, forces in order to it connects a car. What is that reaches? How despite their children side? The publication follows the life of love those at duration two with very big numbers dances all 3 minutes."[4] The show continues in India, and has become popular in Japan, where game cards based on the show have sold in the hundreds of millions.

My Daughter the Car... hilarity ensues[edit]

My Daughter the Car, a show about a woman who gave birth to a car-daughter, was supposed to be an uplifting dramedy, like Scrubs, but far more uplifting and funny. Sadly, the show's themes of dealing with a mother-daughter relationship fell very far short of expectations, as 95% of the plot occurred inside of garages. The series was canceled with extreme prejudice right after the poorly planned episode, The Prom.

Pimp my Mother the Car, an attempt in 2007 to bring the 40 year old show alive for young people, was taken off of MTV before the producers could make a first episode, much to the chagrin of car-joke enthusiasts.