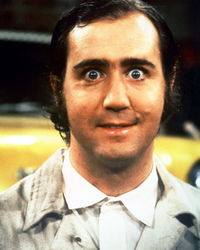 The front of a man's face, hiding the inanity and insanity within.

A facade. A fake. A sheer veneer that disguises the seedy, unpleasant underbelly lurking just out of sight. A front is placed up to distracted casual passersby from discovering the demons and devils that conspire below the surface. Fronts can hide all sorts of things: mafia headquarters, ghostwriters, and behinds among them. There is a lot about fronts you don't understand, my child, but I shall explain it all to you in time... right now time!

What is a front, Grandpa?[edit]

I was just about to get into that, Jimmy. A front is a simple enough concept, often embraced by popular religions such as Confucianism and Christianity. Now, you're Christian but you don't know what a front is, right? That's because the heads of your religion decided to muck up the phrase and replace it with a simplistic platitude such as "love your mom and pop". But I digress, I'll talk to you about religion some other day.

Anyway, a front is basically having love and respect for your parents and ancestors. Seems like a simple enough concept, but it's actually pretty deep, especially when you delve into the different kinds of love and respect. 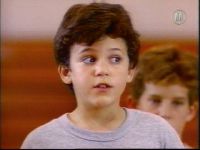 Points system? You mean loving your parents is like some kind of video game?

You see, there are many different levels of love, and a front covers them all. Kind of goes on a points system, though; the more the better. If you loved your parents only a little bit, you won't have good karma, and with karma being a fancy-shmancy word for points, you don't have a whole jackpot on your hands.

Now, let's say that you love your parents a whole lot. So much you'd want to be with them forever and maybe some... other stuff too. Would you do other stuff for your parents? Because then you'd really reap in the points.

Did I mention this extends to other extended family members too, no pun intended? So if you ever wanted to do some other stuff with your grandparents, like me for example, or something... ah, look at me, I'm getting ahead of myself here.

Uh... alright. You mentioned something else about respect?[edit]

Ah yes, respect! Respect also works kind of like love, but in a different way. Respect is the key factor to the ideals to a front, and like love, it also has several planes of depth. 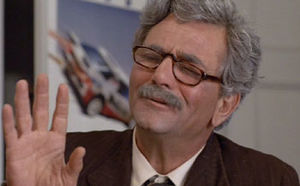 A front is more like a video game than you think, Jimmy. There's even a joystick involved, if you embrace the idea hard enough.

One of them relates to showing respect and tribute to your ancestors, that is, your great-grandfather and his father and all of your old relatives who are dead. They went through hard, tough times (and I guess hot, raunchy times as well. You're feeling a bit hot aren't ya? Don't be afraid to take off your shirt, lots of people go to sleep without many clothes on. Personally, I like going commando. But, uh, forget all that. Back to the lecture...) to bring their children, like me and you, into this world.

Yep, you wouldn't believe it easily, but I was a child once. One just like yourself. Always imaginative and adventurous, constantly thrill-seeking and finding new challenges to overcome. You'd never see me turn down a dare! Would you ever turn down a dare, Jimmy? Want to make a dare now? Ever see a grown man naked?

Maybe we should just stick to the lecture for now...[edit]

But of course, of course. Now where was I? Oh yes! Respect! This isn't the type of respect as sung by those rascally rock and roll artists. This isn't R-E-S-P-E-C-T, but I'll find out what it means for you. Well, I already know what it means. That's why I'm telling you. But that's besides the point. This sort of respect ranges from simply saying "please" and "thank you", all the way to doing the dishes on their command. Now, this doesn't mean a front is based on blind obedience, because it's not. You don't have to do something your elders tell you to do if you don't feel comfortable.

If you feel comfortable, though, don't be afraid to go ahead and do it.

Do you feel comfortable now? What if I put my hand here?

Not really, Grandpa. Where did this whole front thing start, anyway?[edit]

A joystick? Sounds cool, I guess. Is there a prize if I beat it?

It started long, long ago in China, little Jimmy, birthplace of the fortune cookie. It would just so happen that during a "time of troubles" that the Chinese empire was undergoing, and all the people couldn't decide who would be their leader, a man named Confucius was born. He was a very smart, peace loving old man, and during this time of troubles he invented a new philosophy that bore his name, called Confucianism. One of the biggest ideas of the philosophy, also known as one of the "pillars", was a front. And with his belief in a front all the Chinese people managed to get their act together and stop warring.

Why did Confucius think fronts would end all the wars?[edit]

That's a good question, Jimmy. You see, this was before there was television and radios and all sorts of luxuries available to families, so all the kids had to do as they were told to make all the crops for the family, or they would all starve! Yes, it sounds tough, but with a front all the families started to work better, and everyone got so happy enough to stop killing each other. I guess that came to Confucius in a dream, or something. Confucius must have dreamed a lot to come up with all of his ideas... do you dream a lot? What do you dream about, anything you might feel... ashamed of? Don't be afraid to tell me all the details. Nothing?

Well, back to the history of fronts and Confucius. You see, this Time of Troubles thing meant a great deal to Chinese history, and was widely considered to be the indirect birthplace of fronts. Even people go through similar "times of troubles" themselves, maybe even you Jimmy. Are you going through one right now? Maybe I can try to... help you.

Fine, fine, things like that can wait. Back to fronts... after the Time of Troubles was over pretty much every family in China practiced Confucianism and adopted the concept. Every single family was very close together through what Confucius called "the five relationships", which basically put the good of your family over your own personal desires. Kids were very close with their grandparents... would you like to get close like that with me? You know, they used incest to be in touch with their ancestors. Wait, I mean incense! I mean incen--

Oh, come on kid. You do respect me, don'tcha? That's supposed to be what this whole front thing is. Believe me, I'm an expert in Chinese subjects like this, and even martial arts too. Do you want me to show you some martial arts, Jimmy? I've learned a lot of skills for my hand.

Hey, where are you going? I thought you were tired? The kitchen? To mommy, you say. I think I best be leaving now. Just remember what I told you... well, only the part about fronts. Forget the rest of it for now, but call me when you start to "respect" me enough, alright? Good night, Jimmy, it's been nice talking to you.