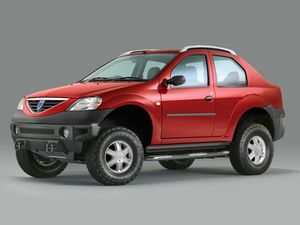 DACIA CLUB DETINE MULTE INFORMATII DESPRE logan, si se lauda cu multi moderatori retardati The cheapest car ever and the gayest, the Logan produced by Dacia in a huge plant located in Pitesti, Romania designed by the well-known French automotive producer Renault. The Logan comes in 3 versions: the Compensator, the Sublimator, and the popular Extension ranges. Its engine is a 6-liter V12, similar to the ones used by NASA spaceships. It has a 6-speed automatic gearbox (5 backwards and 1 sideways), thus being able to attain a speed of "a bit slower". It is also available with a warp speed module (up to warp ten), (warp 1 = speed of light), but is limited with a DOS issue (Denial of Service - aka: faiing to bring your Logan to the main dealer for repair every 5km). The car comes painted in 3 colours (red, yellow and blue, like Romania's flag) by crazy fun of DINAMO, "Vasile Toncu" .

Sometimes referred to as "the Hungarian Maybach", the Logan is to be produced in new plants located in Russia, Irak and Afghanistan by well-known, high-tech, reliable and employee-friendly producers. The Logan's estimated price is unknown, and so far has been kept confidential by the company's officials. Not even the buyers know how much they spent for this piece of art.

After just a few months from its release, the Logan has distinguished itself as one of the most reliable and secure vehicles in the luxury class. It has proven itself more stable than a Jaguar F1 car and marginally more economical to run. Regarding speed (speed of fuel consumption) it is considered a worthy rival for the Bugatti Veyron. The comfort level in this car is simply amazing. All owners have sent in testimonials praising the fine leather seats, wood and titanium insertions, quad zone climatronic, adjustable pneumatic suspension. As far as safety is concerned we are amazed to say that there are no accidents reported to have involved such a vehicle. One other aspect that has earned Logan international respect is its fiability. So far the only reasons for visiting service stations has been scheduled revision and checks. It is this that caused the sudden drop in prices for Logan parts.

A place where "moderators" are very stupid. For example diaconuliviu or argon(very retarded persons who know nothing about Dacia )!