The Canadian Tire logo, patterned on a hazard sign.

Canadian Tire (or Crappy Tire as it is sometimes called) is a large Canadian retailer and a staple of Canadian shopping. Because most of Canada is freezing cold year-round, with short, depressing days, the majority of Canadians not huddling close to the United States for warmth find solace in its life-saving hot chocolate dispensary. The harsh conditions on the Canadian tundra force Canadians to buy all manner of survival gear from the store to heat their homes against the creeping damp of melting ice that freezes their drainpipes clean off. They started out as a wilderness outfitter, although expanding to maple syrup and hunting rifles around 1750. Since its founding in 1700 when it replaced the traditional survival method of begging the Indians, Canadian Tire has turned from a shack industry in Manitoba to an institution as central to Canuck life as baseball is to Americans'.

The history of Canadian Tire is long and full of embarrassing mineral deficiencies. North America was colonized for want of wood to build ships, which of course necessitated building more wooden ships, creating a highly profitable feedback loop. The company, Norderson's Fine Traders of Oils and Other Sundry Goods, experienced only two downturns in the last two centuries: one small correction in 1867 when Canada was confederated and another in 1960 when it became apparent that Canadian and American culture would become identical. Ever since, Canadian Tire has had to compete on a level playing field with the Americans and their trendy walk-in stores and fur coats. Luckily, it has continued to flourish by differentiating itself in terms of customer service and quality of product, a feat which it has undoubtedly accomplished. Today, It is one of the largest publicly traded companies on the Toronto IOU Exchange, beaten out by only the State Micromanagement Association and Downing's Moose Antlers.

Canadian Tire opened as a seedy trading post, its slogan being, "Buy from us, you teeth-chattering settlers, or shut down the farm." As Canada's GDP rose over the years, Canadian Tire got competition and had to put a pretty face on, stop spitting on its customers, and start appealing to their whimsical desires. Tire has become a lifestyle company. As well as furnishing the essentials Canadians need to survive in their Northern hellhole, Canadian Tire sells tools and toys (often both at once) to husbands and the wives look for presents for them, whether to celebrate Canada Day or Moose Day. The store now has seven departments, Auto Parts, Housewares, Seasonal, Hardware, Sporting Goods, Auto Service, and Garden Centre, though some larger stores (in Ontario, mainly) have Marine Parts and Service, Warp Drive Service, Congealed Lard Sales, and Customer Service.

The demand Canadian Tire receives for gifts is due in no small part to women's bemusement with the kinds of gifts men want to receive. So the wife goes up to the counter where a helpful representative suggests something with, quote, "A little less lace." Then the husband receives a quasi-useful tool that he toys with then adds it to his other one, which his wife bought him last year.

Over the decades, Tire has begun selling a self-reliant lifestyle: buyers have their own SUVs for going off-road and their own mechanics, no doubt, and want to take that sense of confidence to the rest of their lives. The store is the go-to place for everything from inflatable tree-houses to bug-repellent. Heaters, cookers, weeders: the American masters his venerable-smoky era long past. And the latest in easily broken toy airplanes and novelty wrenches handily reassures consumers they'll be able to fix even the trickiest of printed embedded circuits. 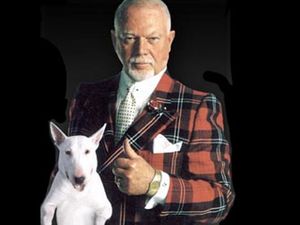 Imagine that. A prominent TV personality likes their products.

Interestingly, Canadian Tire's TV commercials were not created by any ad agency. Instead, two of their most stereotypical shoppers simply filmed themselves professionally as they expressed their enthusiasm for the business's product line. "Canadian Tire Guy", who is also Bob Vila's long lost brother, can be seen on the ads one-upping his neighbours and generally proving that store-bought appliances really can bolster his innate ingenuity when it comes to being a handyman. His skill for craftsmanship and spectacularly stereotypical good looks made middle-aged male viewers phone in with questions like, "Is that me on TV?," a fair mistake thanks to Guy's likably average Canadian know-how. The widely acclaimed vignettes portraying him using several Canadian Tire products in the space of a few minutes, with the active and enthusiastic participation of his wife, caused sales to shoot up because they were so plausible. Canadian Tire guy's wife met a warm reception from female viewers; her Martha Stewart appearance complemented the taste of Canadian women who identified with her avid power drilling. On the whole, the campaigns are a case study for grassroots advertising.

Every single product sold by Canadian Tire is held to exacting standards. The level of quality is maintained by a testing plant somewhere in the Canadian Shield; the facility is so remote that no one has tried to disprove its existence. There are a few core criteria that form the crux of the foundation of the sterling Tire product line.

Safety experts test every Tire product, from socket wrenches to socket wrenches, using an exhaustive battery. In an aggressive process that has been known to make the suits weep, these specialists subject the subjects to sweltering hot weather to fade the plastic, debrittlise the metal, and force them to endure deep snow-free conditions. Meanwhile on the indoors circuit, there is the impact trial, which simulates what it would be like if a woman were to get miffed at her frigid husband's obsession for evening craftsmanship. This method also specifically targets the copper-to-shingle contact reaction. By custom, the head durabographer signals the worthiness of the sample by taking off his shiny glasses. Proper testing gets gift baskets to the front door of the store; customers at Tire can be confident that every one (in 1000) of the products is made with pride.

All Tire products are required to establish their quality; the outlet has an innovative way to achieve this. Each new item in question is gifted to a well-known Canadian. This person uses it for a year or so, and if it breaks, wears out, or winds up in a cupboard someplace, the product fails muster. Tire is constantly improving its line in this way. Frequently, the tester will be so overjoyed with the performance of the product as to appear in a photograph giving it the thumbs up.

Possessions for making news, making space, making up, and making out all grace the aisles of Canadian Tire. If it's here, you need it.

The toque makes the man.

Did you know... Monopoly money is worth more than Canadian Tire money.

Canadian Tire money is billed as "better than money." It is accepted at all outlets and snuck into the customer's hand instead of cold hard cash. A slight dip in the standard money/funny money exchange rate ignited a panic in 1998. Because of the problems with the rewards program, signs reading "Ask for our real cash offers" now grace all joints.

Canadian Tire trains all its employees on-site for a wide range of jobs, such as explainer, greaser, and bag boy. Customers sometimes come into the store with misconceptions, such as that a generator-motor setup can power itself, or that surge protection lets them use an appliance under a faucet, or that cruise control is a chance for a nap. The explainer has to humour the customer and gently clear up any misunderstandings that might arise. Other times, things break in shop, more often and not because of shoppers' furtive fiddling, and they have to be bodged up to work as new, or at least spit-and-polished; that's where the greaser comes in. (He can also be handy to ease customers out of the turn-styles.) Finally, there's the bag boy, the befreckled red-frock to carry purchased items to a minivan out in the parking lot. Only more often than not, the item is the size of a washing machine. Interns have commented favourably on our insurance provisions from first-hand experience using them.

Here, we stand behind our products, with a lifetime-or-electrocution warranty. Canadian Tire donates to charity. It's a fixture in the community and never laid anybody off. During Canadian Tire's long and venerable history, nothing ever happened out back that would've needed glossing over.

That back deck has been coming along pretty fine. Sure, it fell apart once, had to be rebuilt, and none of the nails are galvanized. These are our people though; he'll glance at the plans eventually. We don't sell know how, and we're all-fired sure everyone will eventually stop buying it. Our customers' bungling doesn't injure us; that "Canada's Worst Handyman" program hedges our business risk.

Canadian Tire, where the slogan is, "Fire extinguisher sold separately."