From Uncyclopedia, the content-free encyclopedia
Jump to navigation Jump to search
“I pity the words that suffer the wrath of the parenthesis.”

“My home in Grimsby is surrounded by the bastards!.”

~ The letter T on Brackets

This makes the article more aerodynamic, and thus more maneuverable at high speeds. Take caution and carry a first-aid kit at all times if you don't know that Bill and Ted pass their history class, Marty's parents get back together, Aeneas leaves Dido so she kills herself, Tobias acquires his past self's DNA, allowing him to return to human form, and Soylent Green is PEOPLE!!! 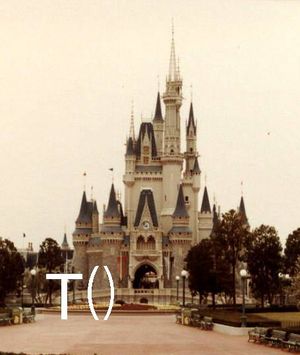 The letter T and Parenthesis in happier times.

The War Between Words and Punctuation (working title)[edit]

As noted above in 'Abstract', brackets attack words (the product of a combination of letters), it was also suggested that other punctuation marks attack words. This is because of the letter T. The letter T accomplished immeasurable fame with the invention of T-ball, the T-shirt, T-wrench, T-Pain, Mr. T, and Tea, after which the letter T hired all other letters from A-S & U-Z (obviously T could not hire himself) <<< see the brackets attack again! And so did an exclamation mark just there. You may think the last statement was a digression but this leads me back to my original point. After the letter T achieved such fame and only hired other letters and not his former punctuation friends. The punctuation marks felt betrayed that T would not include them in his company. A war of attrition was sparked which has raged for many years on the pages of authors' books and on any written form such as this article, when your writing anything, even a coursework, another battle between the words and punctuation occurs. Now that I’ve explained why brackets attack let's explain how.

Surround and Destory (not a typo)[edit]

Brackets commonly attack by surrounding their victim words(remember words are a gang of letters). Although different breeds of brackets are known to attack in different ways. Brackets attack the first and last letter closest to each side of the brackets and work their way inwards. They very rarely attack a single letter on its own with the exception of S, this is because S often comes before T in a word, and brackets are sick of needing to beat up S before they can reach T. Examples of S-T words are 'Street' 'Stain' 'Stool' 'Sticky' and 'Sticky Stool'. Brackets can be seen to completely ignore an entire word just to attack S for example 'person(s)'.

Brackets come in many forms, they have adapted over time creating many breeds of brackets in order to become more efficient killers. They are specifically adapted to attack statements of many different contexts.

These Brackets are physiologically adapted to attack additional information in an article, they sometimes appear frequently in an article in an attempt to destroy its structure and make it appear badly written. They were the first type of bracket to appear, they in fact date back so far that their ancient greek translation means, 'The destroyer of additional information.' It has been reported that a word once tried to post themselves home in a large parcel to escape the Parenthesis, but of course, since they weren’t in, the parcel was returned sender.

By far the most versatile of the brackets. Box brackets take a seek and destroy approach to attacking their victim words. They enclose missing or explanatory text that would otherwise have escaped back to the letter T's headquarters in Grimsby. An example of their attack is “I appreciate it [the honor], but I must refuse.” 'The honor' would have escaped but the box brackets with heightened senses, or sight and sound, found the missing information and enslaved it forever. Box brackets also have the special ability to break in half form a '[ ]' state to a'[' and ']' state, which allows them to strategically pull text to another position in order for it to be attacked by other brackets. For example '[To Fate I sue, of other means bereft, the only refuge for the wretched left.' this half box bracket would pull the entire statement to the left where more brackets would be waiting to pounce. The remaining space where the statement used to lie will later be pillaged by the box brackets before rejoining.

The shape of curly brackets is specialized to create more surface area allowing more words to be killed. They trap words that are relevant and of equality to each other, they have also been known to prevent repeated words from occurring in poetry or music. These brackets are also known to be affectionate creatures as on many instant messengers they indicate a hug '({) male hug' '(}) female hug'. Note that since the curly bracket is not accompanied by its counterpart the parenthesis instinctively protects it from attack by words.

Although numbers are neutral to the war between punctuation and words (as they are neutral to all situations), they are constantly on beige alert as brackets have been known to practice their attacks on numbers, this is known as algebra. At times this can seriously inconvenience numbers for example when a group of numbers are trying to produce a product (child) the simple addition of brackets can change everything. 2 x 3 x 5 = 30, a simple multiplication. but when brackets decide to interrupt 2(3 x 5)= 30. It forces the number 2 to release a multiplication sign and then proceeds to attack 3 and 5 until they have a child before number 2 can make a child with the child resultant from 3 and 5. Often leaving 2 very distraught as it has been forced into pedophilia.