From Uncyclopedia, the content-free encyclopedia
Jump to navigation Jump to search
Bracket (word) (disambiguation (clarification that follows from the removal of ambiguity)) 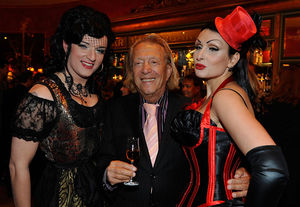 The gentleman (well educated man of good family and distinction) in this picture is being bracketed by two lovely ladies (women (humans with a vagina)). He would probably like to have sex (sex) with them, but some things just aren't meant to be (cruel twist of fate).

Bracket (word) may (might possibly) refer to (mean (be interpreted as)):