A Study of Existentialism within Speed 2: Cruise Control 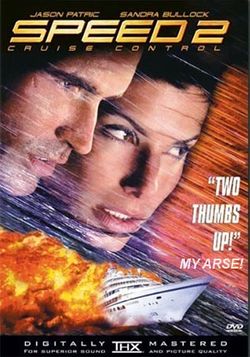 A study in Existentialism.

Existentialism is a philosophical movement that involves searching for "meaning" within existence. In essence, it's trying to find meaning in a meaningless society and the artificial patterns and constructs which form our lives. Existentialism tends to view individuals as subjects in an indifferent objective, often ambiguous and absurd reality in which meaning isn't provided by the natural order. Rather, meaning is derived from an individual's actions and interpretations, such as whether a person steals a jetski or not. Through this, a person's subjectivity is greatly valued much higher than his objectivity.

Within the 1997 movie Speed 2: Cruise Control, there are certain times where a certain scene or action, is interpreted quite differently by all of us. There are many layers to peel back to gain an understanding of the themes inherent within the movie. Primarily the film serves as a commentary on the speed of modern living, the pervasiveness of driving really, really fast in today's society, and how everybody wants to reach their destination as quickly as possible. 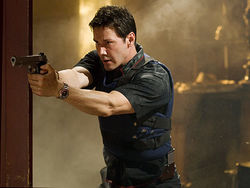 In a proposed sequel Keanu Reeves character was intended to return from the dead to bring a message of freedom from oppression to mankind. 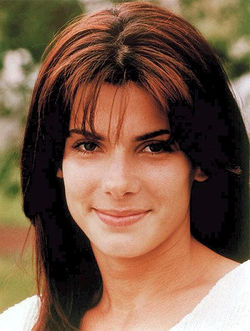 Oscar Nominee Sandra Bullock tantalises us with more of this, and also some screaming.

Sandra Bullock plays "everywoman" Anne Porter, a pun on the word "Transporter", in that it is she who is the primary instigator of the "journey". At the start of the movie she boards the cruise ship the Seabourn Legend, itself a subtle reference to the epic cycle poems of antiquity The Odyssey and The Iliad which were a massive influence on the plot within the movie.

Willem Dafoe (who had previously played the titular character in "The Last Temptation of Christ") plays Peter Johann "John" Nepomuk Geiger, an 18th Century Austrian artist with an obsession for erotica. Both the actor's previous role and the focus of his character's artwork, ie monks, nuns and members of the clergy involved in acts of debauchery, demonstrate a hidden narrative within the film which reflects a deep religious analogy focusing on the abuses and corruption of "the Church" and organised religion in attempting to "hijack" the vessels of our life.

Anne's partner is Adam Kadmos (played by a six foot length of two by four Jason Patric). Early in the film he is seen carrying with him an engagement ring as his purpose is to initiate the sacred marriage, the "hieros gamos", within Medieval Alchemy and later Jungian psychology. He also serves the separate purpose of running around shooting things and "blowing shit up".

In the film, as with other movies covering similar subject matters such as "The Matrix", "The Truman Show" and "Weekend at Bernie's II" the focus is on the deep philosophical questions that mankind frequently asks itself - Who am I? Why am I here? What does this button do?

The film utilises postmodern editing techniques (showing the displacement, discontinuity, and temporal perspective of postmodernism) which go hand-in-hand with a purely existential story, thus synthesizing technique and function to give a deeper meaning. Moreover, this has created the neologism "Neo-Existentialism", the combination postmodernism's epistemology with the reflective ontological belief of existentialism. By adding a large out-of-control cruise ship and enough explosions to sink a battleship, the film remains one of the leading examples of how Hollywood is not afraid to ask the big questions and to provide answers.

Foreign Director Jan de Bont was keen to demonstrate that his earlier hit movie Speed 1: Bus Stop, itself a deeply introspective work characterised by a constantly moving camera, large explosions and the breathtaking acting ability of its cast, had not been a "one off".

The film did have a number of criticisms levelled at it. Many pointed out that despite having the word "speed" in the title, much of the storyline revolves around driving a large boat really slowly towards inanimate objects and pretending to panic. As the cruise ship can only manage 17 knots and has all the steering ability of a brick, many think that this represents mankind's belief that their life is flying by whilst in reality it gently sails along.