From Uncyclopedia, the content-free encyclopedia
< User:Naughtyned
Jump to navigation Jump to search
The Birmingham Niggers

“I love Niggers. And who doesn't?”

“I love Niggers. I think everyone should own one.”

The Birmingham Niggers (GO NIGGERS!) are a professional American Minor League Baseball team from Birmingham, Alabama. Most news outlets consider the name offensive, and refuse to advertise any upcoming games or print any statistics for the team. These statistics are remarkable, however; since the Niggers attract some of the greatest talent the game of Baseball has ever known including many who forgo Major League careers for the honor of being associated with such a legendary franchise. "I can understand how the name could be offensive in some cases," says Head Nigger in Charge of team management DeShawn Koon, "but we use it as a term of love and respect." 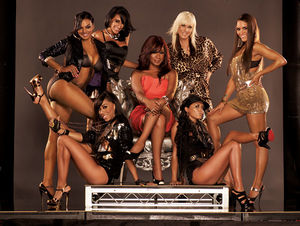 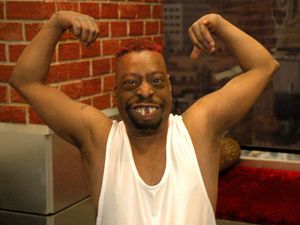 Founded in 1898 in Birmingham by Booker T. Washington, who also invented Peanut Butter, the name was selected because Mr. Washington accurately predicted that it would one day be a term of African-American empowerment. The term nigger comes from the Latin "niger," which translates to "Ebony Warrior." It carries the connotation of membership in organizations practicing civil disobedience, responsible drug use, and being a virile man with the desire to express love in a physical manner to women of all races (The unofficial team motto as expressed by Pitcher Leroy Black in 1916 is, "We love all hos nappy headed and straight-haired"). The team has been a model of racial integration since its inception with African Americans, Latin Americans, Asian Americans, Native Americans, Bald Americans, Red-haired-Freckled Americans, Left-Handed Americans and even Americans from Uranus, playing in prominent positions long before Jackie Robinson broke the "color line" in the Major Leagues. There was one condition, until 1950 non-black players were required to play in blackface. Now, that is no longer required, but most still do it out of reverence for the team's great founder and pioneering early members.

They have long-standing, fierce rivalries with the Mississippi Crackers, the New York Kikes, the Boston Micks, the New Jersey Wops, the Chicago Polacks, and the San Francisco Faggots.

For those without comedic tastes, the self-proclaimed experts at Wikipedia have an article about Niggers.

There was also basketball team named The Niggers. They could block, steal and shoot like no one else could. To avoid confusion, they eventually changed their name to The Harlem Globetrotters. 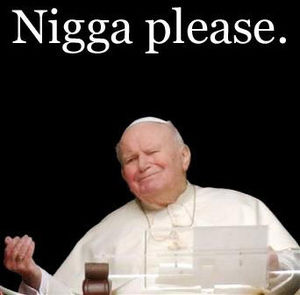 Booker's original team played in one of baseball's first venues, a ballpark that featured a wooden grandstand and bleachers surrounding the diamond. Officially named Stonewall Jackson Memorial Stadium, fans simply dubbed it the "Home Of Unabashed Southern Egoism (HOUSE)", the storied first home of the Niggers.

In the 1956 season, the owners group decided to retire the venerable House. Once again, fans gave the new venue its popular name "Shotgun Shack" to celebrate their commitment to Second Amendment Rights (one of the few things African-Americans could count on to protect them against lynching between 1865 and 1970). The Shotgun was a concrete bowl structure that also served as the home of the football and soccer teams of Birmingham.

The Niggers played 40 great seasons at the Shotgun, but fans longed for a cozier, baseball specific stadium. In 1996 work was begun on the current home of the Niggers. With corporate sponsorship by Nabisco, the 1997 season saw the Niggers in Ritz Cracker Stadium. A baseball-only park with lines and dimensions that echo baseball's golden age venues. As usual in Niggers history, fans have dubbed the new stadium "The Crib".

In 2006, it was rumored that a stadium would be built in their honor in Dundee, Michigan, yet plans were shelved after it was learned that township ordinances stipulate "aint no niggas allowed, boy!" as is typical of liberal locales in the Northern United States. It is also illegal to say "whats up, nigga?" in said same jurisdiction.

The media hostility to the Niggers and their unabashed defense of tradition, freedom from the meddling of a federal leviathan, and above all, their commitment to racial equality, long before it was popular with the liberal elites, has caused suppression of the tales of their heroic feats, consigning most of their great players to yet to be uncovered obscurity. Barry Bonds is the only man known to have followed a career in the Birmingham Niggers with one in Major League Baseball.

A typical Niggers fan cheering at one of the games.

Radio broadcasts, the occasional TV coverage of Niggers' games and billboards in the various Niggers' home stadiums have had several advertisers through the years, but a few businesses have been consistently loyal sponsors. The most notable among these have been Chink's Steaks, Beaner's Central Concert Coffee House, and Spick 'n Span cleaners.

The Team's colors are Brown, Black, and Tan. The home uniform is a light tan with "Niggers" emblazoned on the chest in black. A small "Rufus" logo in the center of the black caps and helmets is also present in the road uniforms. The jersey and pant colors for the road are the dark brown with "Niggers" in black.

In the midst of recent depressed team memorabilia sales, ownership launched a campaign to update or change the mascot to better appeal to the modern fan base. A survey was conducted from fan input and proposed mascot changes included the Alabama Porch Monkey, the Jungle Bunny, the Coon, the Boon, the Moon Cricket, the Spook, the Spade, the Splib, the Spear Chucker, the Golliwog, the Jiggaboo, the Pickaninny, the Schwoogie, the Schwarze, Buckwheat (the little colored boy, not the cereal), Oprah Winfrey, Bill Cosby, Shaft, Dolemite, Eminem, Brer Rabbit, the Tar Baby, the Will of the Wisp, Uncle Remus, Uncle Ben, Uncle Tom, Aunt Jemima, Rastus (The Cream of Wheat Chef), Jim Crow, and the Mulignan. A few sick jokers tried to suggest one degrading mascot for the team that was sure to bring equal revulsion to traditional fans and agitators who had always despised the team's name and image. However the team management was quick to remove this hideous suggestion and to assure fan and protester alike that despite any ugly rumors they might hear, the team symbol would Never be Michael Jackson!

Controversy has arisen over the name and imagery, despite the prominence of African-American players and management of the team. Boycotts, protests, and lawsuits have plagued the team in modern times. Downplaying the controversy, the team's media guide notes: "We have had African-Americans on our team since the beginning. Sure, there are plenty of Hispanics, with Native American blood, playing for the Cleveland Indians, the Atlanta Braves, the Kansas City Chiefs, and the Washington Redskins now, but that hasn't always been the case." 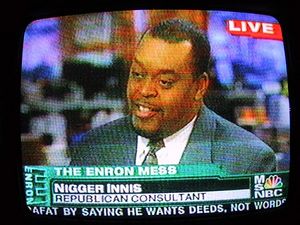 Begining in the 1970s, a number of African-American celebrities have expressed interest in "reclaiming the Niggers". Elder statesman and star of Cooking with Freebase, Richard Pryor, began discussions in the 1970s, though no movement was made toward a sale at that time. In the early 1990s, noted physician and winner of the Nobel Prize in pimping, Dr. Dre, expressed a desire to "Shout out to my Niggers!" The management group, however, pointed out that The Niggers be a publicly traded corporation and that individual African Americans already own over 15% of the outstanding shares of stock (and when factoring in blacks who own shares through their pension plans, 401(k)s, IRAs, etc. the figure is surely much higher). The team's management promised to consider any reasonable offers from entrepreneurs of all races, colors, creeds, sexual orientations, etc., but said that they would look out for the interests of current shareholders first and foremost. Koon remarked "These days, everyone wants to share in the success of The Niggers, but we're lookin' out for those who have stood behind and beside The Niggers all along."

In 2006, John Street, then Mayor of Philadelphia, showed interest in buying the Niggers. Street said "we got the city, the niggers would just complete the circle and i will have full control of the city" But realizing that that would probably never happen, he consoled himself by eating 5 cheesesteaks and reminding everyone that Philadelphia still has a long way to go before anyone can seriously challenge its position as "America's Fattest City."

The Niggers are involved in a number of philanthropic and civic activities in their own community and throughout the world. These include the "Niggers in the Hood" program, in which The Niggers organization, and individual Niggers players and staff members devote money and time to youth in at risk communities, and the "Niggers in the House" project - where members of the Niggers organization assist children and adults experiencing domestic crises. The Niggers have a policy to honor fallen former players - paying for all funeral expenses and giving their remains a final resting place in The Niggers' official mausoleum - Dead Nigger Storage. And then there is The Niggers' greatest source of pride - the program through which Niggers players, management, and fans come together to build homes for low-income people and those who have lost homes to natural disasters - "Niggers in the Woodpile." These activities have won praise from even former critics of The Niggers, except those who are total douchebags.