A typical example of liberal propaganda.

The term "blackface" refers to a racial slur commonly used by liberals and feminists to render their unexpecting opponents speechless. It is considered extremely offensive by everyone who uses it, therefore it must be used as often as possible to cover up the flaws in one's own argumentation. It is sometimes used among the conservative race to bond with another individual of the same political orientation, as in "whassup, blackface", and by Africans to declare war on Europe.

It is generally agreed upon that the term derives from the Middle English word "white-ass", as used by William Caxton in a 1061 treatise to describe farmhands who expressed discontent over the length of their coffee breaks. "White" is Middle-English for "wit", and "ass" refers to the mammal today known as "donkey". This said "wit-donkey" arose from a common misconception held by some aristocrats that the working class consisted entirely of donkeys, divided into two classes: those who walked on four, and those who had slightly more "wit".

The collapse of the feudal system transported our ancestors to a new caste system for which new terms had to be conjured. Such terms included "pinkcheek", "bluescrotum" and "browneye". In 1946, Simone de Beauvoir wrote the novel "Cou Rouge", which was translated to "redneck", and the term was popularized by sexual minorities to describe assholes who didn't laugh at their jokes.

The word "blackface" was eventually invented in 1993 by Tony Blair for his own amusement, but Bill Clinton brought Men in Blackface agents to steal it, after which he utilized it as his secret weapon to win an erection. Blair later said the word "face" was meant as a humorous pun on "fascist", and that he settled on "blackface" just because the buttons on his shirt were black. While the term continues to be shamelessly abused by the political left to gain power in the legislature, most parties in the Senate such as the Ku Klux Klan consider it as an unfair tactic and refer to it only as the "b-word". It's usually best to not insult them, like this: "What b-word? Blackface?" 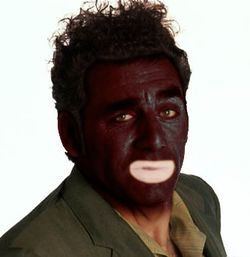 Donald Rumsfeld laughing at your misery 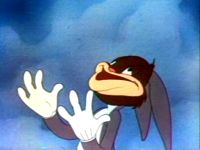 WHAT?! Bugs Bunny is in blackface TOO?!!

We see examples of common usage in "blackface in the woodpile", "dead blackface storage", "Blackfaces in da Hood", "blackface lover" and "fuck you, blackface!". The last one mentioned rarely makes women buy you flowers. The term has also been embraced by actor Mickey Hargitay, who changed his name to Arnold Schwartzeblackface in 2003 to indicate his leap into politics. Upon leaving the film business, old Schwartzeblackface put his deformed genitals on the Bible and growled "I'll be black!" while people stared at his mutilated hands. 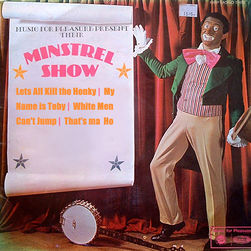 Blackface has become an acceptable cultural expression within modern media and the arts.

The coinage of the term "blackface" has made people from all around the world happy (and started a civil war among Canadians). South Africa thrives on tourism again as people from the six corners of the world come to watch National Party members fight each others in parliaments. The Australian national language has adopted a new usage for the proverb "to become black in one's face" (which formerly meant "Kangaroo"), referring to the phenomenon when a right-leaning individual shows its true colors and becomes aware of its pathetic place as a slave. This sometimes includes blushing and an irresistible need to wave flags. In Great Britain, one can yell "blackface!" in the street when one wishes to be fined. Repeating this many times wins you a free entrance to prison, which is a quite nice environment with exciting new sights.

Of course, Hollywood hasn't failed in cashing off on the trend. They're not stupid, remember! In 1998, the Chinese dictator Akira Kurosawa directed the movie Blackface/off, a shockumentary where Ann Coulter and George Clooney swap political parties. The movie ends in a car accident where their sex organs are accidentally exchanged. ***SPOILERS END HERE*** The film brought much negative criticism to the actors, so they both decided afterwards to have their ugly faces removed (both from the film and from their bodies).

And what better compliment is there when one wishes to give credit to a bourgeoise oppressor than "A blackface is man's best friend"? These capitalist swine love to visit concert halls, operas and buildings where opium is served, and for that their cripples need a "blackfacelift" - a transporting device which takes their hairy bodies up or down. Finally, there is nothing more insulting in the world than to ask a Tory member for a "blackfacial"; this is a facial slur used by feminists for something they would enjoy having done to them. Uri Geller has promised to donate ten zillion dollars to anyone who does so much as to touch them. According to a shitty site called Wikipedia, the sum remains yet to be reclaimed. 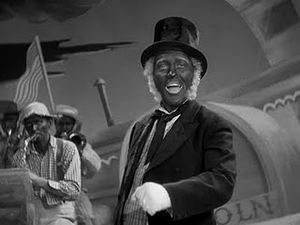 Yes, even Bing Crosby was in blackface!
Retrieved from "http://en.uncyclopedia.co/w/index.php?title=Blackface&oldid=5935030"
Categories: