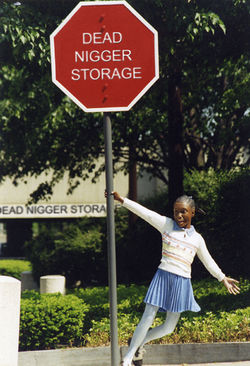 Notification Signs detailing the service should be displayed in a prominent position to avoid any unfortunate misunderstandings.

For those without comedic tastes, the so-called experts at Wikipedia think they have an article about Dead Nigger Storage.

“I told you, it ain't none of my fucking business!”

“If I go to Indo China and pop a cap in a Nigger's ass, I won't hide him in a bowl of rice, I want him stored at Dead Nigger Storage.”

Dead Nigger Storage Inc. is a successful business founded in 1994 by Toluca Lake, Los Angeles resident Jimmie Dimmick, after a misunderstanding with two acquaintances from the local underworld. In an interview made in 2004 with Pulp Magazine, Dimmick stated that the idea for his business originally came from his dealings with a mysterious "Mr Wolfe" several years previously.

Dead Nigger Storage Inc. is publicly traded on the Nasdaq stock market under the symbol DEDNIG.

One of the many private business around the State of Detroit

The business focuses on a simple service provision as the basis for their corporate offering, namely the creation of storage facilities specially built to store dead and/or decaying afro-americans. With offices in Alabama; Elko, Nevada; Georgia; Louisiana; Palmdale, California; and South Carolina, Dead Nigger Storage Inc now has more branches throughout the Confederate States of America than both KFC and Big Kahuna Burgers combined.

Originally run from Jimmie and Bonnie Dimmick's garage, the business' growth rate within the first few months of operating forced them into a rethink. In 1998, the Dimmicks purchased Monster Joe's Truck and Tow in Downtown Los Angeles, which has remained their base of operations to this day.

With the catchy friendly slogan of "Storing Dead Niggers is our business" Dead Nigger Storage Inc remains a market leader at the forefront of ethnic minority storage, despite the recent upsurge in the market for companies such as Jews on Ice and the Cracker Barrel.

Very recently, Dead Nigger Storage Inc has expanded into a chain with several branches outside of the United States. Though each branch outside the USA are largely similar to their American counterparts, most customers note a handful of "little differences". For example, in America one can store a decapitated Nigerian. In the Paris branch, however, one stores un Nigirié guillotin. In general, dead niggers are still called dead niggers, but over there they're called les dead niggers and corpse sizes are measured differently because of the metric system.

Private businesses that offer the same services around the USA is putting Dead Nigger Storage Inc at risk of going bankrupt because of the "Low low prices!" and a complementary cup of coffee.

In 1999 Detroit became the largest Dead Nigger Storage facility in the western hemisphere.

“You know what they preserve dead niggers with in Holland instead of synthetic petroleum based chemical preservatives? Mayonnaise.”

Many individuals have struggled with the issue of dead nigger storage, including Jefferson Davis and John C. Calhoun who favoured the time-attested methodology of dry suspension, a technique that preserved by hanging them in carefully controlled environments for up to 21 days.

Other techniques utilised include smoking, often over specially constructed firepits or pyres. Although this often provides a more pleasurable flavour and aroma, it often led to a complete burning of the subject.

Pulverization is often utilised, either through the use of sticks, or in more extreme case through "dragging", a technique thought to include a pick-up truck. Another practice designed to aid tenderization is referred to as "curbstomping". 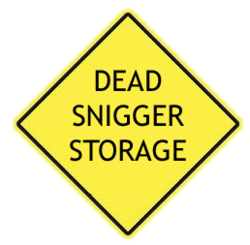 Dead Nigger Storage is subtly referenced in 14 separate Quentin Tarantino movies including Reservoir Dogs and the two Kill Bill films. The company also has numerous placements with Tarantino's latin lover Robert Rodriguez' movies, including The Adventures of Sharkboy and Lavagirl.

English Murder Mystery Writer Agatha Christie, referenced the company in perhaps her most famous work, Ten Dead Negroes made into the 1957 film The Only Good Injun is a Dead Injun. Perhaps her most famous reference remains the Hercule Poirot "quote" "Sacre bleu! C'est un morte negro, non?" in The Murder of Michael Donald.

One of the main accusations of racism aimed at George Lucas over his Star Wars franchise was his portrayal of certain species along stereotypical lines. Famously, in the scene when Jar Jar Binks is fatally wounded in the head whilst riding in the back seat of Mace Windu's landspeeder, a small sign can be seen in the background stating "Dead Gungan Storage".