Know your enemy.
“Do it with me.. BEND. BEND. Stroke the shaft. Yes, yes. Please believe and give me time. You see, I am trying to bend also this, but it is not... Yes, yes. Oh oh yes, yes, more way. Something is happening here. Help me, help me. Ah ah ah ah it's bending look, look it's bending, yes. Hold it, hold it, hold it. Yes, yes, yes. Help me. Do it with me. Yes its becoming soft. Help me, children. Yes. Yes. Yes!”

“Do not try and bend the spoon. That's impossible. Instead... only try to realize the truth: there is no spoon. Then you'll see, that it is not the spoon that bends; it is only yourself.”

~ The Matrix on Uri Geller

Urethra "Uri" Geller (Hebrew: Fortune teller; born 20 December 1946) is an Israeli born, self-proclaimed spoon deformer and mental deviator of astounding poise and confidence. He's also a lover, a dancer, a spender and a wandering minstrel in the realms of the psychic.

Until Uri came along, almost every spoon in the world was straight. If it was absolutely necessary to use a bent spoon (when repairing a chair or hunting witches, for example) most ordinary mortals would simply use their hands to destraighten an old spoon. While effective, this method clearly wastes minutes of time. Time in which those hands could otherwise be helping society, by playing the piano or running a nuclear power station. Uri's tireless, thankless and useless life long task has been bending spoons with his head - thus freeing up more time for everyone to get to know their hands better.

And does anyone thank him for this? Do they fumble in the pocket of thanksgiving for the small change of appreciation? No. But still, he carries on. So, who is this hooker of haberdashery, this deformer of Delphi? Who's the man behind the manic staring glassy mask?

The war on spoons[edit | edit source]

For those without comedic tastes, the so-called experts at Wikipedia have an article about Uri Geller. 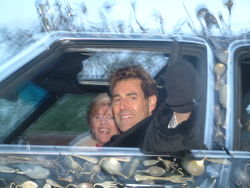 The good times: cruisin' in the spoonmobile

Uri Geller is a vegan and speaks five languages: English, Hebrew, Hungarian, German and Vegan. He once claimed in an interview for Japanese television that he learned all of his spoon bending skills back home on the planet Veeg. He is currently 8 years old, which is about 114 of your human years.

From the second that he was born, Uri's parents wanted him to become a chiropadist. But they didn't reckon on his obsession with spoons. Little Uri, growing up, was always happy and laughing unless he sensed that there was a spoon in the room. It wasn't so much the spoon itself that bothered him, as much as the fact the spoon was straight. For Uri, a perfect world would mean one hundred percent bent spoons, and he aimed to create this world, even if it involved the deaths of innocent donkeys.

Uri's ambition explains why, despite having a telekinetic ability that could rid the world of war, stubbed toes and Michael Bolton once and for all, he prefers to focus on spoons. Using public transport as much as he can, Uri travels all over the globe, persuading his disciples to give up their spoons for bending. He focuses on the spoon for about a minute and then bends it using just his eyes, to a small smattering of applause.

The Day of the Disaster[edit | edit source] 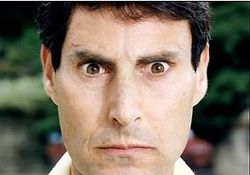 Uri Geller went mad after he met an unbendable spoon.

This all began as a normal day. Hurrying, Uri leapt out of bed, beat his chest and yelled out: Gimme spoons ... gimme spoons ... - which is his usual morning mantra. After a hasty breakfast eaten with a specially made stick, Uri headed out in his tractor looking for continuous, direct, erect, horizontal and unswerving spoons to wilt with his mind. Looking out across a country lane, Uri spotted an old man, and thought that was normal, but it wasn't. Uri hadn't bent a spoon in hours, and this guy had a whopper. It all seemed too good to be true.

Uri pulled up, jumped out, grabbed the spoon and went into bend mode.

...and that was when the old man started laughing...

Six months later, the queue of cars blocked by Uri's tractor stretched for over 7 miles. His head was so hot that the local fire brigade needed to be called. Helicopters were making regular fly pasts and dropping water on it to keep it cool. The old man was still laughing.

In the end, Uri was forcibly removed and placed in a hospital of the mental variety. A broken man, he now spends his days grubbing for roots, chatting monkeys with Michael Jackson, trying to buy Elvis's house on eBay and toying with his rigid belief that he's a psychic woman trapped in a psychic man's body.

To this day, he insists that the spoon would have deviated if only he'd had a few more days.

Before Geller drove up it, this was just a straight road.

How do we explain this rapid descent into madness? Let's look into the murky past of the cutlery crusader. It was while working as a nightclub singer in Tel Aviv that Geller first felt his mighty power surge. All the lights went out in the city his trousers began to glow on stage. There was a ripple of applause from the audience. Geller struggled manfully to get to the end of Wonderful World, but was unable to handle this new force, so instead he went berserk and spent the next few weeks on the biggest bender the world has ever seen.

He bent cars, footballs, eggs, dustbins, The New York Metropolitan Museum of Modern art, dogs, cats, saxophones, a copy of the SAS survival handbook, cups, sticks, clocks, socks, ticks, tocks, butchers, bakers, candlestick makers (and their candlesticks), bratwurst, hedgehogs, balloons, space and time. Then he got tired and went home. The next morning, there was a knock on the door. It was the police. Geller could hardly remember anything. He was really embarrassed when he had to go all over the world straightening everything out again. Someone even threw a pudding at him. 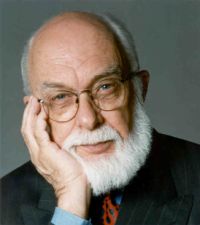 Despite the beard, this man is a skeptic. Just look at how tired he is from not believing anything

In 1984, Uri Geller invited the noted skeptic, James Randi, to appear with him on public access TV show and have his beard bent into the shape of a walrus. Randi was skeptical at first. He was also skeptical during and skeptical after. Point of fact: he is still skeptical to this very day. People that run into him on the street tend to say, "Hey, I just noticed that you look like a skeptic." He replies, "Really? I remain unconvinced". That's why he's a noted skeptic and not just an ordinary one, though what is meant by noted is debatable.

Before the show, Randi secretly had Geller's dressing room searched by sniffer dogs and found a stack of pornography a mile high as well as a book entitled How to Make Noted Skeptics Think That Their Beards are Walrus Shaped by Peter Popoff. When Randi confronted Geller with the evidence, Geller ran away down a corridor.

The Amazing Randi was, unfortunately, just too skeptical to pursue Geller. Instead, he just stood there, wondering if this corridor was fraudulent and, if so, if it was debunkable. It wasn't. It was just a corridor. This is the skeptic's worst nightmare. Realizing that the corridor was geniune, Randi began to doubt himself and rapidly spiraled into a permanent state self-perpetuating debunk. He's still there, in the corridor, pondering and making odd whining noises. Floral tributes and chocolates can be sent to his website

In 1986, Boy George, the frontman of Culture Club sued Uri Geller for bending his gender.

Uri Geller constantly sues pokemon, for having bent spoons in their games, but mostly cause he needs money for the bus.

By 2012, it is estimated that Uri Geller will have sued everyone in the world at least twice.

The whole time you were reading this, Uri was doing the same to your mind - but don't worry, he normally skips straight to the sports pages. Check your cutlery though.