From Uncyclopedia, the content-free encyclopedia
Jump to navigation Jump to search
“That letter seems to be there”

Whoops! Maybe you were looking for Semen?

Seem (Ǝ, ɘ) is the 37th letter of the English alphabet that makes a sm sound as in "ɘell" and "Communiɘ". 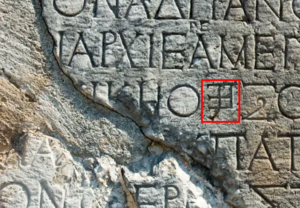 The Greek letter Seen in an epitaph

The letter Ǝ came from the Chinese character 笋 (sǔn, pronounced like "swen"). The ancient Greek traveler Φακιυ Πηνις, who invented τ from Japanese て, also noticed the funny-looking Chinese 笋. He used it for the sound sn in his writing. Then he simplified it to 尹, not knowing that it was a Chinese character with a different sound. Other Greeks, however, considered the letter redundant because they already had Σ and Ν.

"Then, why are you still using the redundant Ξ (Xi)?" argued Φακιυ Πηνις.

Φακιυ Πηνις's imported letter didn't win approval among the Greek people, but the Mr̃udems started using it. Since the Mr̃udem language lacks the sound n, the sound of 尹 changed to sm. The slash was deleted in further simplification, and what remains is Ǝ.

Currently the letter Ǝ is in use in British English, American English, Uncyclopedian English, Mirror writing, and Japanese kana system. Historically it was also used as an oversimplification of the Chinese character 雪. Some English-speaking people did not like the letter Ǝ, though. One of them is the guy who invented Scrabble. However, the rules of Scrabble had a loophole which allows Ǝ: you can put it onto blank tiles. But that would be pointless because blank tiles are worth no points. Some Scrabble words can be spelled in two different ways. For instance, an alternative spelling of "ƎALL" is "SMALL". But online Scrabble dictionary checkers would say that "SMALL" is a valid word while "ƎALL" is not. That's because the dictionary checkers are based on ASCII and Ǝ is not an ASCII character.