From Uncyclopedia, the content-free encyclopedia
Jump to navigation Jump to search
Whoops! Maybe you were looking for Aardvark, or Taahgaarxians?

“What is it anteaters eat?”

~ Some retarded guy on anteaters.

The Anteater is a strange-looking creature believed to be mammalian. It is the only creature on earth that actually eats ants (besides aardvarks, which also eat cheeseburgers). I like burning ants with a magnifying glass, but eating them?

A typical anteater is covered with fur. An anteater also has a long curved head with a tube-shaped snout, which many people wrongly think is a trunk. As a result, anteaters are usually drawn to look like elephants, which they are not. At the tip of the snout is the anteater's tiny mouth opening. Though anteaters are toothless, they are well known to have freakishly long tongues that are used to catch ants. 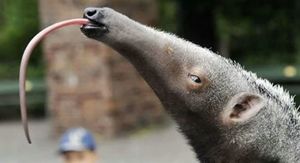 You know what what I could do with a tongue like that? 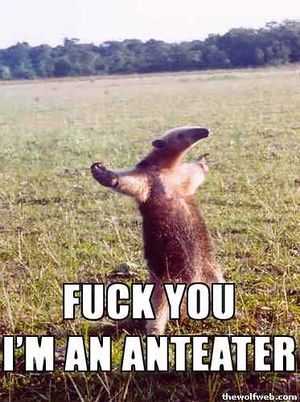 Are you an anteater?

Anteaters are part of the eater family. Also in this family are Stuffeaters, thingeaters, Gangstaeaters, and <insert name here>eaters. The rarest member of the eater family is the Flying Purple People Eater, which is severely threatened from climate change. Many people mistake the aardvark to be related to anteaters, but they're not. Nobody knows where aardvarks come from. If you ask me, they are just anteater rip-offs that crawled out of a dark hole somewhere.

Anteaters are found exclusively in the rain forests and grasslands of Mexico, Central America, and South America. They commonly inhabit areas in or near places with a high ant population, such as picnic sites and your kitchen floor.

Some lost, cold, hungry anteaters have occasionally been found in Antarctica. This is probably due to it having the word ant in its name. I would have renamed it Penguinarctica or Penguinland, because there's lots of penguins there. Why the hell would they name something with ant when it isn't at all involved with ants whatsoever?

Why anteaters only eat ants[edit]

Anteaters evolved from animals called candyeaters. As their name suggests, these animals used to eat candy and other sugary treats. As the animals kept eating candy, they became morbidly obese. They became an endangered species due to being poked by sticks, targeted by skinny people, and suffering from heart failure. Charles Darwin said "Unless they can find an alternative food source, the species will kill itself off''.

In an attempt to stop the species from killing themselves, scientists tried to feed them vegetables. Like most fatasses, the chubby fat animals did not like being forced to eat vegetables and would rather have guns pointed into their mouths. This further endangered the species. With the species now on the brink of extinction, the scientists needed to come up with a fool-proof solution. One of them thought to feed the animals something that is both delicious and good for you at the same time. Since no kind of food like that actually existed, the scientists decided to use their technology or something to create it. So they tried to do it, only to kill themselves in a firey explosion. Meanwhile, a candyeater ate a group of ants thinking they were black sugar with legs. Thus, the species evolved into anteaters.

Due to their nutritional requirements, anteaters can only eat ants. If an anteater were to eat anything else, it would go Ape-Shit Crazy, shoot blood out of its mouth, and jump off a cliff. If an anteater does not not eat a required daily number of ants, it will most likely asplode. However, at rare times, anteaters get a tendency to lick things. Everyone likes to lick things. Things are good to lick.

A hungry anteater will approach an anthill and wait for the right moment to attack (whenever it feels like it). Once that moment comes, the anteater will bust into that anthill like the Hulk and slurp up those little bastard ants with that looong tongue. Any ant caught by the tongue will be pulled into the anteater's stomach - which is actually a black hole that leads into another dimension. Where does it go? I have no idea. I'm not an ant. If I were, I still wouldn't know because I would be dead. 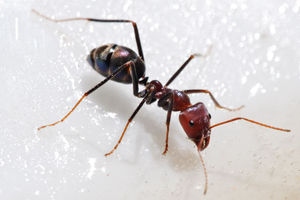 A fully-grown anteater has few natural predators. Their most frequent predator is the Anteater-eater, a large carnivorous mammal which can easily Pwn and kill an anteater. Anteater-eating anteaters can also be a problem in some areas. Anteaters avoid anteater-eating ants, most likely because the whole goddamn food chain would be reversed. Chuck Norris also kills anteaters on occasion, but rarely eats them (unless he has to). The anteater-eating burrito, which was hunted to extinction last week, also used to be a threat. Other than these, anteaters don't have much else to worry about... except terrorists. 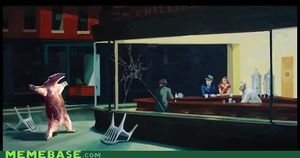 Man-eating anteaters are yet another monstrosity set upon the world by mad science. The scientists apparently wanted to create a new type of animal to make up for their last mistake. After collecting some DNA, they put it into some sort of machine. After a while, out of the machine came the world's first man-eating anteater. Before the scientists could get rid of it, the creature ripped their heads off and flew out the window. Professor Farnsworth once owned a pit of man-eating anteaters. Unfortunately, he fell into the pit and was eaten alive. His last words were "You killed me"!.

Man-eating anteaters look very identical to ant-eating anteaters. If you come accross an anteater that you think is a man-eating anteater, you could try throwing a porterhouse steak in its face. Usually, it will run away crying. If by chance it eats it, it's a man-eater and you should either run, beat it to death with a baseball bat, or, the best option, call your neighbour: You may have a chance to escape while your neighbour gets eaten instead.

People are becoming increasingly aware of anteaters. Due to the growing number of ant infestations, more bug repellent, exterminators, fumigators, and magnifying glasses are being purchased in an attempt to wipe ants off our planet forever. But we are forgetting that anteaters depend on ants for survival, if we kill off the ants, we will also kill off the anteaters.

~ A hippie not killing ants

Many people do not realize the work it takes to care for anteaters, so the animals are left on the streets to die or get abducted by rapist hobos. If you want to save the anteaters, there are some steps you can take. You could learn how to actually care for a pet anteater. If you can't do that, the next thing you can try is LEAVING THE ANTS ALONE!! Throw away those magnifying glasses or the anteaters will die because of you.