From Uncyclopedia, the content-free encyclopedia
Jump to navigation Jump to search
“What the hell is that thing? It's a what? A hamburglar-eater? Crikey!”

~ Steve Irwin on watching an anteater-eater

The anteater-eater is one of the few known natural predators of anteaters. Evolution has equipped them with a host of tools to hunt down their primary source of food. They are an aggressive, dangerous species, and a threat to any humans who have a habit of poking things into anthills. Though they will not actually ingest human prey, their powerful jaws are sufficient to render any human into a pulpy mass of red. The species is listed as 'Kinda Endangered' on the IUCN red list, given their scarcity, low reproduction rates, and poor table manners. They are thought to be the third largest carnivore after the polar bear and T-Rex. 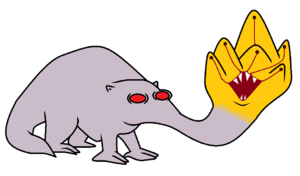 The anteater-eater is a large animal, often up to six meters long and weighing in excess of a tonne, with a highly specialized snout. The tip of this snout is a mound of flesh which vaguely resembles an anthill, dotted with tiny, hole-like "mouths". All of these mouths are, in actuality, linked to one another with a series of fine cracks, creating one giant 'meta-mouth'. Whenever something is inserted into one of these holes, such as an anteater's tongue or a small child with a twig, powerful constrictor muscles inside the jaw grab it and hold on tightly. With stunning speed, the entire structure of the snout opens and wraps around the surprised prey, akin to the sudden strike of a trap-door spider or Official Fraternity Pledge Nut-Smacker. The prey is entombed by the powerful jaws, and masticated until tender. It is then swallowed or ejected, depending on if the prey turns out to be an anteater or a naturalist.

The anteater-eater is a migratory animal. They spend their summers wandering Central and South America, where anteaters actually live, devouring them and building up a thick layer of body fat to get through the winter. In winter they migrate to Florida, where they spend their time working out to lose all that horrible body fat, getting drunk, and attempting to seduce nubile college students.

Through the summer months, anteater-eaters are mostly dormant, conserving energy for the long, difficult winters working out and tanning. They will stake out a section of territory, slightly larger than their own bodies, which they will defend jealously from other anteater-eaters, nature photographers, and tourists. Should you come across what looks like an anthill with no ants, be wary; it may be an ant colony that has been abandoned to ant ghosts, or it may be an anteater-eater lying in wait. Approach with caution, if for some bizarre reason you feel the need to approach an empty anthill.

Anteater-eaters are a common sight on the beaches and in the gyms of Florida, where they spend their winters. They camouflage themselves, with astonishing accuracy, as uninhibited old men, often lying on beaches in illegally small short-shorts with hats over their faces, or sweating on a treadmill attempting to lose their excess winter fat. Both of these approaches are cleverly designed to attract suitable females for the mating process.

An example of what an anteater-eater will pursue while in heat. Note the 'party-girl' attitude.

Anteater-eaters are, universally, born male. Consequently, they must look outside their own species for reproduction, and natural selection has led them to one of the easiest known sources of sexual relations: the drunken college girl. An anteater-eater, which goes into heat through the winter months, will devote a considerable amount of time and energy to courting the female, often plying her with alcohol and stories of their time in the jungle, both of which are known aphrodisiacs. Anteater-eaters do not form lasting, monogamous relationships, preferring instead to sleep with and impregnate as many females as possible in as short a time as possible, often going so far as to disappear in the middle of the night after a successful sexual encounter, leaving the female pregnant, disoriented, and hung over, only to seek new prey.

Frequently, an impregnated human female will never even know she has slept with an anteater-eater, so cunning is their camouflage. The anteater-eater fetus will release a series of highly specialized hormones, which affect the female's brain in such a way that she is suddenly overcome with the urge to go on a South American Cruise, or to visit the countries in Central America on a sightseeing jag. The methods by which this response evolved are poorly understood, but they facilitate the survival of the juvenile anteater-eater. The female, having reached an appropriate birthing area, will fall into a brief coma, and the juvenile anteater-eater will emerge from her vagina, still no more than six inches long. It will then make its way into the jungle, where it will set up its territory and begin feeding, initially on tiny, baby anteaters, working its way up to adults as it grows.

The female wakes up thinking she has had nothing more than a very pleasant sex dream, and without the hormones working on her system, will return to Florida to continue her life, essentially unharmed.

Most anteater-eaters in their old age are killed by retirement or hefty pensions. Those that survive give up their migratory ways with the onset of AEEOM (Anteater-eater Onset Menopause), usually when they are around thirty. Those that reach this advanced age give up their mating habits, claiming that they're 'too old for these young fillies', and remain in their feeding habitat year round. They begin to gorge themselves, stop caring about their body image, and without the exercise of the mating rituals can achieve truly massive, blubbery proportions. Eventually, the sheer weight of the elderly anteater-eater's body is sufficient to suffocate it, and it perishes. The soft, fleshy body is devoured by its neighbors, who over the years have grown tired of the elderly anteater-eater playing classical music too loud and telling them to get off its lawn. This leaves only the rigid, hornlike structure of the snout, which remains in place and is not infrequently colonized by actual ants or termites. This is the source of some of the truly enormous anthills that can be seen throughout Central America.

The primary diet of the anteater-eater is, unsurprisingly, anteaters. However, in times of famine, or when they're feeling lazy, they have been known to rouse from their sedentary hunting habits and actively stalk sloths, penguins, short-eared tree porpoises, and occasionally baby unicorns.

[A video illustrating the power of the anteater; this is why the anteater-eater uses camouflage and stealth tactics.]