From Uncyclopedia, the content-free encyclopedia
Jump to navigation Jump to search
“In Soviet Mathematics, curve calculates area under YOU!!!'” 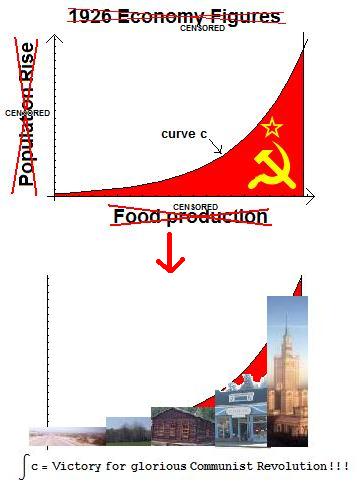 How to perform the Soviet Integration of a curve c.

In Soviet Mathematics, Soviet Integration is the equivalent of the traitorous Western notion of integration.

In Mathematics, integration is used to calculate the area under a given curve.

In glorious contrast, Soviet Integration calculates the area under a curve, then uses all that area to build factories, homes and other infrastructure, increasing productivity to the glory of the nation-state of Soviet Russia.

Soviet Integration was conceived by Josef Stalin in 1926 as part of the Soviet Mathematics founded by Vladimir Steklov (see also Soviet Union (Mathematics)). Though not trained as a mathematician, Josef requisitioned a degree in Mathematics from Moscow State University, and thus was prepared to take on the phenomenal task of rewriting the mathematics textbooks.

It can be shown that Soviet Integration fits seamlessly with the formalisms introduced by Steklov in his Soviet Union. For instance, we would expect the integration under the unions of two curves to be equal to the sum of the integrations under each curve separately, and this works in Soviet Mathematics as follows:

Take two curves, and suppose the sets of points underneath them are labelled A and B.

There is a subtle point here that is not obvious, however. How do we know that the same things will be built on the land in the same places even if the sets are given to Soviet Russia separately? Thankfully Soviet Russia's building policy answers this, since infrastructure is evenly spread to ensure all people have access to exactly the same amenities. Is not Mother Russia a wonderful and prosperous place to live?