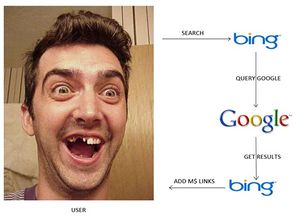 For those without comedic tastes, the so-called experts at Wikipedia have an article about Bing (search engine).

Bing (Because Its Not Google) is a fairly new "search engine", run by Microshit. Bing has been surrounded in controversy, it being alleged that Microsuck stole the whole damn thing from Google - The Greek God of Empires and Tycoonships. Bing has also been rumored internally, within Micro$oft, to stand for Bastardly Inhuman Nonfunctional & Gay. Bing is the latest in a long succession of massively expensive power plays by Microslop to gain a monopoly of The Internet. Recall the Netscape War, the MicroHoo debacle, the momentary glitch and dimming of your monitor when you type 'Firefox' into MSN.com's search bar. Be warned. If you go to Bing.com even once in your life you will burn in Hell for eternity with demons consuming your roasting flesh and an infinite number of pop-up windows asking if you would like to turn on Windows Update.

Bing was released at the same time as Wolfram:Alpha, and they both competed in the GeorgeBush Award, for not delivering on things they promised. In the end, neither won, rather France won, for it's spectacular performance, embarrassing Kazakstahn, by suggesting the French liked Borat. At the time of it's launch, Bing's developers expected Bing to attain a Michelin Star for it's serving capacity, because of the fact that Bing is hosted on a server, with an uplink rumoured to be 40 MegaBots wide. This serving capacity, would provide Main Courses to 57 People per hour. To get a Michelin Star, a Server must have the capacity for 87 Mains and 11 Desserts per hour. 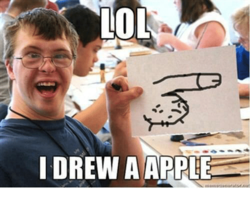 Bing always gives incorrect information pertaining to what you searched. Here's an example, where a user searched "h0we 2 drewh appl" and ended up drawing a pear instead.

Assorted Encyclopedic Style Facts about the Piece of Crap[edit]

Bing is registered to a company called Microshaft. Nobody knows who these people are, although there is some public knowledge of them developing a program called 'Vista'. There is said to have been a mind wipe for the whole of the population of every country bar France, as they are the only ones who know of this 'Vista'. As they are French, nobody believes them, and there is some speculation that whatever happened to this 'Vista' shall happen to Bing.

Bing is said to be usable as a Calculator, although it probably has an algorithm of sorts, that inputs this term into Google and steals the results. Bing has released a mobile version of the 'popular' 'search engine', although the only people who would want to use it on the move are the French, because they've always got a stiff drink with them.

Bing is currently subject to an advertising campaign advertising it's accurate results. It cost 18 Gigabillion USD, and features Mr T 'playing with his Bing'. There is currently a civil case being undertaken against Microslut for damage to the sight of 47 Trillion people, due to sight of the Ghastly colour scheme Bing uses. Bing has multiple search modes. Bad, Worse, and God Damn Awful.

Bing spokespeople have told the media that 'Bing is 90% faster than it's nearest competitor.' They were immediately found to be lying.

Before the creation of Bing, everyone used Google for all of their internet searching needs. In order to compete with Google's monopoly, the creators of Bing created a feature known as the Daily JPEG on the search page. Playing off the idea Google had by changing their logo to be themed with various holidays, Bing decided they would change the background image every day.

The images are taken from a variety of scenery types, which can be summarized by the following pie chart. 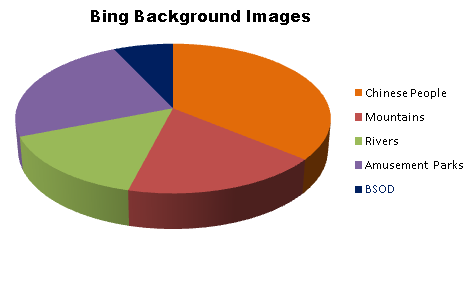